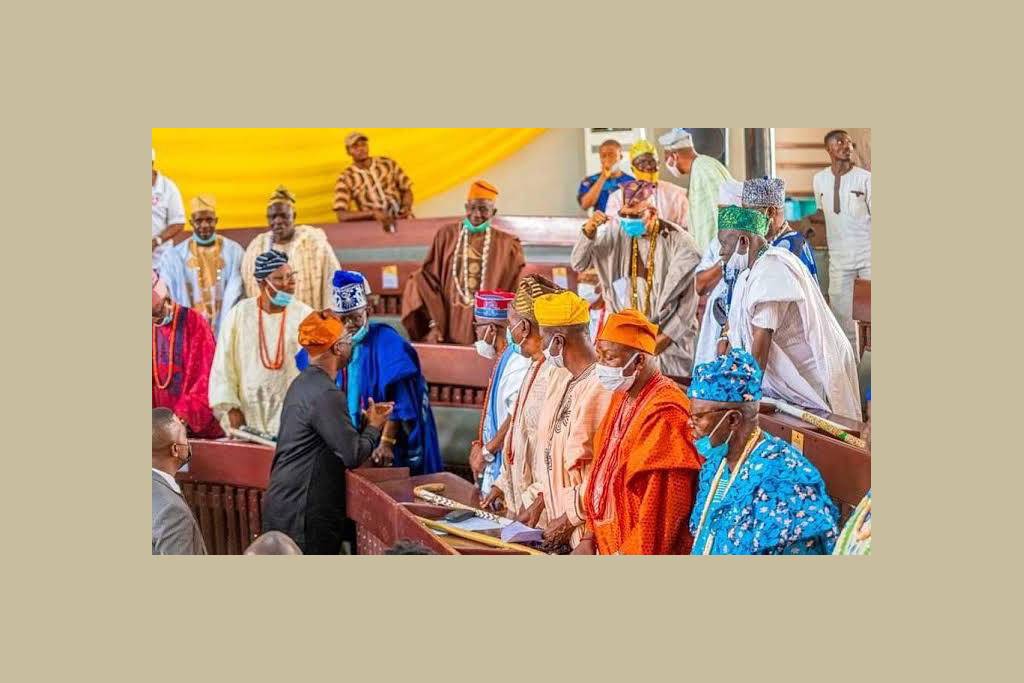 The Monarch said Oyo Traditional Rulers are thankful to the Governor, for giving special attention to traditional rulers across the State.

He stated this in Igboho town, while addressing members of Binukonu foodstuff sellers association who were formally received into the GSM Marines by its convener and Commissioner for Information, Culture and Tourism, Dr. Wasiu Olatubosun.

Oba Olalere Olawuwo said Governor Makinde has continued to accord the monarchs utmost respect, adding that he allows traditional rulers to make inputs in governance to fast track development and promote culture.

The Monarch explained that the Yoruba nation could only be accorded due recognition in Nigeria, if elites and the political class, could emulate Governor Seyi Makinde by placing high premium on the traditional institution.

He further explained that Governor Makinde through his people oriented projects has also developed various towns and communities, stressing that, for this, they will support continuation of good Governance in the State.

Oba Olawuwo who identified many lofty infrastructural projects of the State Government under the leadership of Governor Makinde stressed the need for every resident of the State to team up with the Governor in his repositioning effort.

He called on the convener and members of the GSM Marines to put in their best to ensure the peace and progress being experience in Oyo State is not allowed to be truncated.

The Alepata assured of his support to the team and the State Government as generally election approaches.

Oba Olawuwo urged members of the Binukonu foodstuffs sellers association to be committed to the assignment given to them so that they can also be a beneficiaries of all good things happening in the State.

Oba Olawuwo appealed to Gov Seyi Makinde to assist in giving financial aid to members of the group in order for them to expand their various businesses.

Some of the leaders of the group assured that they will put in their best to ensure Governor Seyi Makinde returns come May 29, 2023.

Members of the association who were all at the Igboho city hall, venue of the inauguration, with their permanent voters card (PVC), urged the State Government to assist them financially so as to improve their socio economic growth.

Also addressing members of Binukonu foodstuffs sellers association, the Convener, GSM Marines and Commissioner for Information, Culture and Tourism, Dr Olatunbosun, said the current Government being led by Governor Makinde will not relent in giving people value for their votes at all times.

Speaking on behalf of other Co-ordinating members of the GSM Marines, namely Mr. Oriyomi Hamzat and Princess Seyi Peace, the Commissioner stated that traditional institution remains major stakeholders through which the State Government is connecting with the people in meeting their yearnings.

While appealing to residents in the State to collect their permanent voters card, Olatubosun added that GSM MARINES have hundred of thousand members who are ready to canvass and preach all the good works of Gov Makinde and ensure his re-election come 2023 and urged members of the group to also join in the campaign.