The Permanent Secretary, Oyo State Local Government Service Commission, Mr. Akinlayo Funmilayo, has handed down a note of warning to the heads of Local Government administration, directors of administration and general services in all the council areas in the State on the need to ensure that their occupation of such offices adds value to and upgrades the system.

Mr. Funmilayo gave this charge at the conference room of the Commission while holding his different maiden meetings with the two cadres.

“I need to reiterate that the essence of being in office is to ensure that you bring about an improvement, innovation, effectiveness, and efficiency to the service and the system. If you can’t leave the system better than you met it, then you don’t deserve to occupy that office, ” the Permanent Secretary affirmed.

Speaking further, Mr. Funmilayo admonished them on the imperative of comporting themselves decently and with dignity, reminding them that the task of rebuilding a service that we can all be proud of is a joint one.

The number one career officer in the Local Government Service of Oyo State also used the medium to appreciate His Excellency, Engr Seyi Makinde for appointing him as a Permanent Secretary in the state service, with the promise to justify the confidence reposted in him. He further eulogized the governor for lifting the embargo on the Commission’s accounts, as well as the restoration of its 1% and 0.5% statutory fund for the training of personnel and recurrent expenditures, respectively.

Responding on behalf of their various cadres, Dr. (Mrs) Ayo Alaga and Alh. T T Mudasiru congratulated the PS on his appointment, with the prayer that he would succeed in office and that his tenure would bring about the desired positive changes to the service. 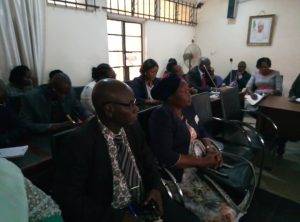