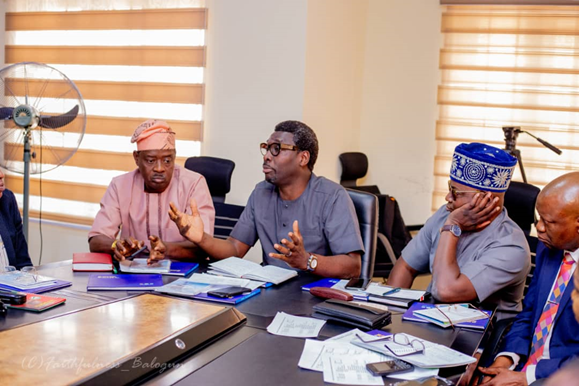 15 May 2020 Akufo Road And Other Promises Under Fulfillment

Pliable roads make a crucial contribution to economic development and growth, while it also brings significant social benefits to the society.

A high-quality road network is essential not only for connecting key urban centers but for improving the connectivity of more isolated local communities for whom many public transport options are limited or not available.

Apete-Awotan-Akufo road in Ido LG area is a 12killometer road connecting about 40 Communities and villages.

This road has been in bad shape for a long time and last received attention between 2007 and 2011, during the time of former Governor Adebayo Alao-Akala.

The road was also long characterized by neglect during the past administration of Governor Abiola Ajimobi, whom they described as having neglected the road for political revenge, as it was noted for being an area with anti-Ajimobi voters.

It is as big a problem for taxi drivers as it is for other road users. Commercial drivers and motorcyclists are hardly seen at the Akufo end of the stretch, therefore, residents are often left to wait in the open for several hours before they get a means of transportation out of or to further move inside the town.

Expanding crevasses by the roadside have also been reported to have led to the death of road users on multiple occasions, especially during the rainy seasons which made residents of Apete-Awotan-Akufo areas to have clamored for the reconstruction of the road for many years with no response from the Government, which has forced the Community into self-help on many occasions.

The same road also leads to the Akufo farm settlement, which the Government of Engr. Seyi Makinde hopes to transform into a farm estate this year.

It is however, a prayer answered for the Apete-Awotan-Akufo road users as Governor Seyi Makinde has finally come to their rescue by fixing the road for optimum use.

The Governor paid a visit to the road back in 2019 with a promise to fix the road in no distant time.

The promise was kept, and construction works have since begun on the road. Residents of the community making use of the road are beginning to heave a sigh of relief, with the assurance that as soon as work is completed on the road, it will be a different story entirely.

This is in relation with the Moniya/Iseyin road project which is another monumental achievement of the Seyi Makinde’s administration. The road is a 65 kilometers road which was contracted out during the past administration at a sum of N7bn, but nothing substantial was done on the road. The Government of Seyi Makinde revoked the contract from the former handler and later re-awarded it to Kopek Construction Company at a sum of N9bn. According to the Governor, when it is completed, “the road would enhance the socio-economic development of the state, especially of the people of Oke-Ogun area. It will address the challenges of moving farm produce from Oke-Ogun axis to Ibadan, the state capital,” the Governor stated.

The commitment of Governor Seyi Makinde’s administration to the total wellbeing of the State is second to none. You often find him saying “we are not doing politics, we are serving the people”

Recently, eight other road projects were approved by the State Government for immediate reconstruction and rehabilitation in all the five geopolitical zones of the State. Also the Seyi Makinde Government launched “operation zero tolerance for potholes in the State” to ensure that all potholes are quickly fixed before the rain starts so as to ease traffic congestion often orchestrated by bad portions of the roads.