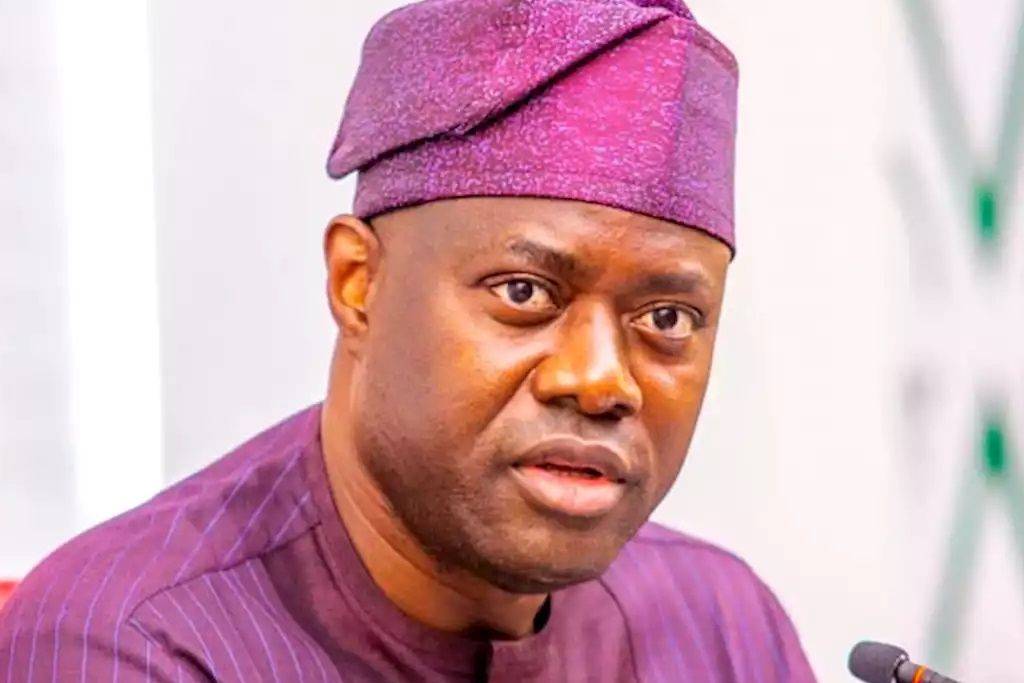 Oyo State Governor, ‘Seyi Makinde, has stated that fiscal federalism and devolution of powers remained the only ways to take Nigeria away from the edge of the precipice.

The Governor, who stated that true federalism is the future of democracy in the country, said that Nigeria must devolve powers to the federating units, especially the powers to control natural resources and the State security architecture, in order for it to avoid the path of destruction.

A statement by the Chief Press Secretary to the Governor, Mr. Taiwo Adisa, indicated that Makinde stated these at the International Conference Centre, University of Ibadan, on Tuesday, during his keynote address at the maiden Governor ‘Seyi Makinde National Democracy Summit.

At the Summit, with the theme: “The Future of Democracy in Nigeria,” the Governor of Ondo State, Arakunrin Rotimi Akeredolu, who was represented by the Ondo State Attorney-General and Commissioner of Justice, Sir Charles Titiloye; former Governor of Edo State, Professor Osariemen Osunbor and the Director-General of the Nigerian Institute of International Affairs (NIIA), Professor Eghosa Osaghae, among others, spoke on the imperative of federalism.

In his speech, Governor Makinde said: “As we continue to deliberate on the future of democracy in Nigeria, let us remember that true federalism is the way forward. Restructuring the Nigerian State, and giving the federating units more powers is the route to economic prosperity.

“We are the Federal Republic of Nigeria, but our federalism exists in name only. Students of political history will tell you that what we have been practising is, in fact, a unitary system of Government – where more powers are concentrated in the central Government.

“There is so much power at the centre and another thing that our political theorists will tell you is that by nature, a unitary system of Government is better suited for small countries, maybe countries with flat ethnic nationalities.

“Nigeria is not a small country and very diverse. So, you can easily identify why we are experiencing developmental challenges across the board. We are trying to fit a square peg into a round hole. For true federalism to thrive, the federating units should have more powers and autonomy. The legislature is also fighting for autonomy, which has shown that we have to devolve.”

The Governor added that it has become imperative for the country to address the issue of devolution of powers along the two critical lines of power to control natural resources and power to control State security architecture.

He maintained that when States are allowed to take control of their resources, they will have more funds to execute developmental projects and the idea of going cap-in-hand to seek federal allocations would end.

On the issue of the need for States to have control over State’s security architecture, Governor Makinde said: “The prevailing security situation in Nigeria as a whole has shown how closely linked security is to development. Without a secure environment, all efforts to attract investments will be in vain. Nobody wants to put their money where they are not sure of making a profit.

“A look at the National Bureau of Statistics, Nigeria’s data will tell you which States record the lowest Internally Generated Revenue in Nigeria.

“When we analyse those figures, we conclude that there is a direct link between insecurity and underdevelopment. That being established, we need to fully appreciate that State policing is a sure cure to our national development challenges. Anyone who has been involved in security at any level will tell you that policing is local.

“One of the reasons why the Western Nigeria Security Network code-named Amotekun is recording success is because members of the corps are drawn from the locality. They know the terrain and so can gather needed intelligence. Also, they can be held accountable by the local people.

“When the State Governors become the actual Chief Security Officers in charge of the security personnel in their State, they can quickly respond to security challenges.

“Yes, we will continue to do our best. We were able to get Amotekun off the ground and it is in operation now…but there are several limitations to what Amotekun can do right now and the types of firearms they can carry. If we are given the authority and licence, I will also buy AK47 rifles for Amotekun.

“So, these are just two areas where true federalism will bring greater economic benefits and development to Nigerian States.”

The Governor also declared that his administration is ready to ensure that true federalism is practised to the extent that the Nigerian Constitution allows, pointing out that his Government has continued to seek areas of collaboration with the Federal Government in order to attract economic benefits to the people of the State.

“For instance, we have indicated our interest in having a stake in the Ibadan Dry Port. It is a Federal Government project but Oyo State wants it to succeed. Another example is our collaboration with the Federal Ministry of Mines and Steel Development, which is in charge of solid minerals, to build a gemstone market in the State. We already donated two hectares of land in Ojoo, Ibadan, for this purpose.

“So, if we can achieve this much now, imagine how much more Oyo State will benefit should we practice true federalism. This is why one of the fundamental issues we have put before the Federal Government after our recent meeting of Governors of southern Nigeria is restructuring; this is the future of democracy in Nigeria,” Makinde added.

Governor Makinde, however, stated that there can be no democracy without the rule of law, noting that for the country’s democracy to endure, actions must be based on the law and that the sanctity of the judiciary and the press must be upheld.

He also used the opportunity to correct the false report that he said the Oyo State Government would not obey the court order to pay the ousted Local Government Chairmen, stating that what he said was that clarifications would be sought on the matter, as only 33 of the 68 sacked chairmen are known to the Constitution as chairmen of Local Governments.

In his submission, the Ondo State Attorney-General said: “What we have had so far in this country is not federalism but a unitary system of Government.

“These are local issues, which the State can easily handle, and for us to have true federalism that we are talking about, these are areas that should be permanently handed over to the states of the Federation.”

Equally, Prof. Osunbor said: “The fundamental issues to consider in a period like this, which will strengthen democratic practice or aspirations of this country are majorly two issues.

“The first one is the issue of fiscal federalism and I am very happy Governor Makinde also stressed this in his opening remarks, when he said: “We actually need to go back to the 60s and adopt, in fact, revive the fiscal federal structure that we had, which was quite robust and capable indeed.

“Then, the States were generating a lot of funds for the Local Government. And I think that is the salvation for the federal system in this country.

“If we do not go back to that, any talk on federalism in this country is quite a propaganda and will not take this country out of the woods, especially in terms of effective Governance.”

Other dignitaries at the event include the Speaker of Oyo State House of Assembly, Rt. Hon. Debo Ogundoyin, the Chief of Staff to the Osun State Governor, who represented Governor Gboyega Oyetola, Charles Diji Akinola legislators, Top Government officials and Local Government chairmen.