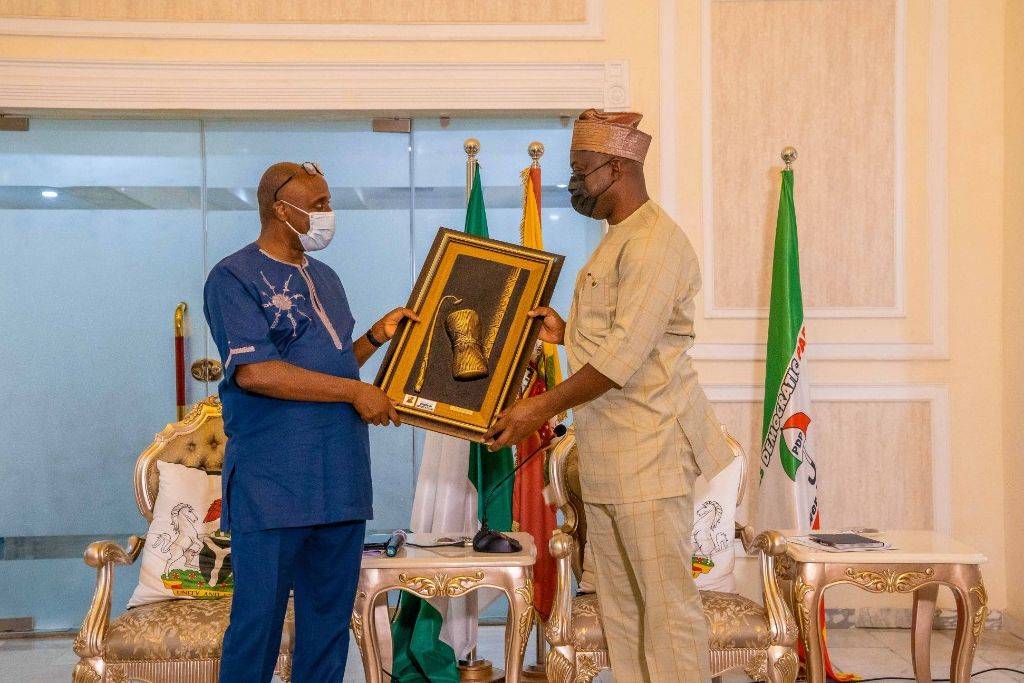 Governor ‘Seyi Makinde of Oyo State and the Minister of Transportation, Mr. Rotimi Amechi met in Ibadan on Friday where they agreed to resolve all issues delaying the take-off of Ibadan Inland Dry Port (IDP).

The Governor and the Minister, who also jointly inspected the location of the Dry Port and the Moniya Terminal of the Lagos-Ibadan rail line, said that the Dry Port would bring great economic benefits to Nigerians and relieve the Apapa Ports, Lagos of congestion.

While speaking when Amaechi led the delegation including officials of his Ministry and the Nigerian Shippers Council to Government House, Agodi, Ibadan, Governor Makinde declared that the State wanted the Dry Port to start operation almost immediately adding that the government would do all that is necessary to ensure the bottlenecks are resolved.

He promised to further reinforce the synergy between the State Government and the Federal Government over the project.

The Governor said that he was aware of most of the issues affecting the take off of the project and gave the commitment that all issues would be amicably resolved.

On Infrastructure around the Dry Port corridor, Makinde said that his Government had completely reconstructed the Moniya – Iseyin road, which linked the Inland Dry Port (IDP).

He said: “We are thinking of a very solid infrastructure that will ensure that the headache at Apapa in Lagos doesn’t happen here, we will be able to handle it very well and plan ahead in this place; that is the scheme and scope of infrastructure we are thinking about.

“For us, the whole area, the IDP, the rail corridor and the few acquisitions that will be done around that place; we think that should be our new world, a new business district for us.

“If what we are putting in place are not going to fit into the plan of the Inland Dry Port, we can always look at other areas for us to execute the same plan.”

On the plan by the state to have Equity in the project, Makinde stated that it was to smoothen the operations of the Port.

He said: “We feel that irrespective of who is in Government, it’s better for the state to play a part in the project.

“So Oyo state is pushing to have 15 per cent equity in the dry port and industrial park, we believe that will help the project in the future.

“We think that model is actually good for the Federal Government and the project promoters as well.

“Because, further down the line, when there are challenges, such challenges can be quickly resolved if the state government is participating in the project.

Makinde assured the Minister of his commitment and that of the State Government would do everything to ensure that the IDP project becomes a reality.

The Minister, while speaking during the courtesy visit said that the Federal Government plans to inaugurate the Lagos/Ibadan rail project in June.

Amechi said his visit to Ibadan was to intimate the Governor on issues as regards the early commencement of the IDP project.

The Minister, who said Ibadan had been selected for the project before the Buhari administration came into power, said that the present Federal Government wanted to start the project and complete it before the end of its tenure in 2023.

He said his Ministry had complained to the State Government because the preferred bidders needed to do construction design but was impossible because the entire land for the project has not been secured.

He, therefore, implored the State Government; as part of the infrastructure, to construct link road that will link the IDP with Ibadan-Oyo road.

On the 15 per cent equity requested by the Oyo State Government, the Minister said the Government has “to pay money for equity participation in the project.

“If Oyo State wants 15 per cent equity in the project, then it has to contribute,” he said.

He, however, clarified that the donation of land for the project and provision of Infrastructure, such as roads and others, cannot be converted to equity.

The Minister posited that construction work on the site would commence once the Federal Executive Council gives approval and the state play its part.

The Executive Secretary of the Nigeria Shippers Council – Mr Hassan Bello was among the entourage of the Minister during the visit.