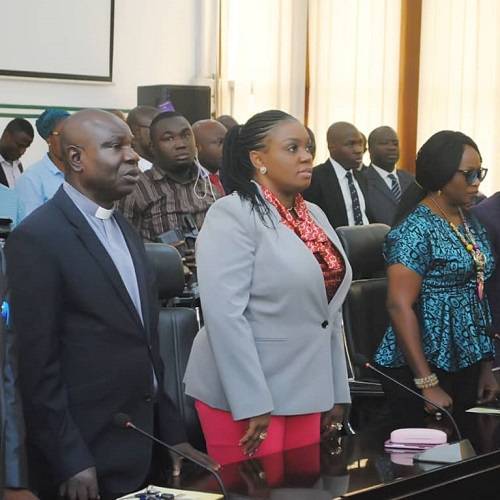 Governor Seyi Makinde on Tuesday during inauguration of the Board in the Exco chamber noted that dealing with the scourge of AIDS “is of utmost importance to his administration.”

He stated that though there had been some progresses with regards to anti-retroviral medication, abstinence from sex remained the best way to control the spread of AIDS.

In his speech shortly after inaugurating the Board, Governor Makinde said: “Health is one of the pillars which this administration is resting on, and dealing with the scourge of HIV in our society is of utmost importance to this administration.

“Some of you like Reverend Babatunde and Dr Titilayo [representing inter-religious body] are also very important to this advocacy because when you either stand on the pulpit or in front of the congregation in mosque when you are preaching, you can also put the word out there for people to know. There has been a lot of progress on the anti-retroviral medication but abstinence is the best way to control the spread of HIV/AIDS scourge.

“I don’t have any doubt in my mind that we have assembled the best hands to manage the affairs of Oyo State Agency for control of AIDS. I have taken time to reflect on what was the modus operandi in the past and I can say to you clearly that the State used to be supplied with medications that were just about to expire. They have brought some of them to me and, please, that era should be over and be over for good in Oyo State.”

The Governor maintained that though some people had been putting pressure on him to probe the activities of the immediate past SACA Board headed by the wife of the former governor of the State, Senator Abiola Ajimobi, he had decided to be forward-looking and to focus on moving the state forward.

“Some people have even came to us and said we must probe activities of the past board and you all know the chairperson of that board. So, it’s a no-go-area for me. We want to be forward-looking. Whatever has happened in the past should be in the past. Let us draw the line and focus on our own result areas.
“I want to thank you for accepting to serve the people of Oyo State in this capacity and I also wish you a successful and impactful tenure,” Governor Makinde remarked.

Earlier, SACA’s Executive Secretary, Dr. Abass, who was represented by the Project Manager of the Agency, Dr. Kayode Ogunkunle maintained that the Makinde administration’s focus on the health sector had seen it paying particular attention to HIV/AIDS response by ensuring that people have access to relevant information, HIV testing services and access to treatment, care and support for people living with the virus.

He, however, noted that though the State had made progress in scaling up HIV treatment and prevention services in recent time, a development which he noted impacted positively on the prevalence rate in the State, all stakeholders still had a lot of work to do.

The board consisted twenty members selected from various line ministries and relevant stakeholders in HIV response.