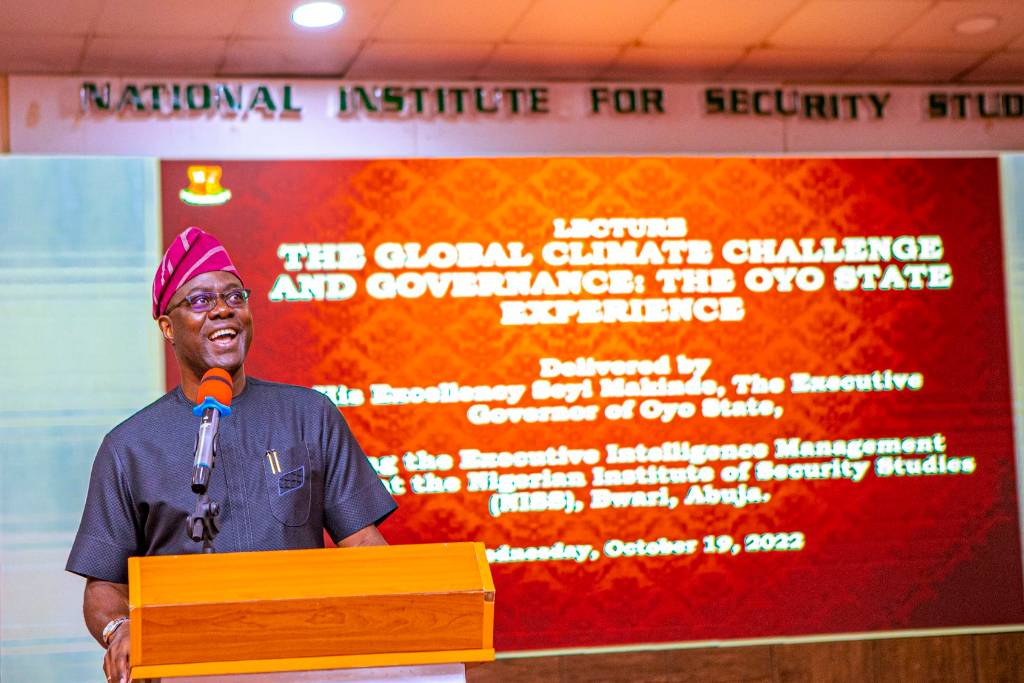 Being a Lecture titled ‘The Global Climate Challenge and Governance: The Oyo State Experience’ Delivered by His Excellency Seyi Makinde, the Executive Governor of Oyo State, During the Executive Intelligence Management Course at the Nigerian Institute of Security Studies (NISS), Bwari, Abuja on Wednesday, October 19, 2022.

I am happy to be with such a distinguished group of persons today. Officers, gentlemen and others involved in ensuring that our security architecture works. I was warned not to tell this story because I have told it one too many times, but I am going to tell it anyway. You see, growing up, I wanted to join the army. I even applied to be an officer. Well, that’s one of these dreams that didn’t become a reality because I was rejected. But now, I am a Governor and on special days, I take salute from the military. So, I think that’s a good compensation.

Before I begin this lecture, let me thank the organisers for a job well done. Putting together an event like this is definitely no mean fit. I also want to thank you for inviting me to talk about governance. Good governance is a topic very close to my heart. I believe if we can set politics aside after campaigns and face governance, our country will be the better for it.

So today, I am here to deliver a lecture titled: ‘The Global Climate Challenge and Governance: The Oyo State Experience’. Speaking on this topic, I will be highlighting three key points by answering these questions:

Whether we agree that the earth is getting warmer two times faster than it used to be in the past or not, the fact remains that something is happening to our climate and that thing is affecting the balance of life.

All over the world, we are seeing the effects. For example, countries in North America and Europe, where a lot of us here have relatives and friends that can give us firsthand information, are experiencing the coldest winters and the hottest summers in history. These have led to more frequent wildfires, storms, droughts, flooding, landslides, receding coastlines and expanding deserts. All of these come with attendant security risks.

Australia is experiencing severe droughts; Asia is experiencing heat waves such as they have not experienced in the past. And in Africa, desert encroachments mean less land for cultivation. Droughts mean that farmers who rely on rainfall will suffer severe losses. Same with flooding; the water will carry everything away. And when people lose their source of livelihood, they become a security risk. At the same time, the entire community also faces food security issues.

Nigeria has not been exempted from these issues. In the past week, the rains have led to severe flooding of certain regions. You may have heard of the floods in many states in Southern Nigeria. In fact, according to the most recent reports, there is flooding in 33 out of Nigeria’s 36 states. So far, the disaster has impacted around 1.4 million people. Some of the pictures from areas most badly hit are heart wrenching. In some instances, entire houses were submerged.

But we are talking about floods now because we are in the rainy season. In a short while, we will be facing the dry season and it will also come with its own challenges. One of these is the movement of herdsmen into areas where they will find better pasture. This nomadic movement has led to clashes between farmers and herdsmen.

And that brings me to the second point. How has the climate challenge affected the people of Oyo State?

But before I talk about how Oyo State is affected by these global challenges, let me mention that in many cases in third world countries, the challenges we face are exacerbated by our actions or inaction. For example, drainages are built and interlinked so that rainwater can be channeled appropriately. But our people will choose to dispose of refuse in drainages and rivers causing blockage. We have seen it happen over and over. Once it rains, people will begin to dump their waste in the drains and rivers with the belief that it will be carried away. They do not think about where the debris is going.

So, when we have a volume of rainfall which the drains normally should handle, the blockages lead to flooding.

Now, let me talk about how Oyo State is affected by climate challenges.

Ibadan, especially, has had a perennial flooding issue. We had a flood in 1978. Another in 1980, with the overflow of the Ogunpa River after 10 hours of rainfall. That flood was so bad that it left the city in ruins. But in August, 2011, we had what some have described as being the worst flood that had ever hit the city. After 6 hours of torrential rainfall, the Eleyele Dam caved in and the waters flooded the city. After the 2011 floods, targeted action was taken to ensure that the flooding did not repeat itself.

Aside from the flooding issue, Ibadan has also had a perennial waste disposal issue which is worsening other climate related challenges. There have been several plans to address the situation. But between the lack of political will, the cost of a total revamp of the waste management infrastructure and the attitude of the people towards waste disposal, this has proved to be a herculean task.

The third leg of the issues related to the global climate challenge that has affected us in Oyo State is the farmer-herder clashes. For several years, the rural areas of Ibarapa, and parts of Oke-Ogun were no-go areas. Farmers and herdsmen were constantly clashing posing serious security issues in those zones. In fact, hardly a news cycle would pass by without news of killing, maiming and kidnapping in those areas.

As mentioned earlier, Ibadan has always had a flooding problem. And so, when we came into office in 2019, we met the Ibadan Urban Flood Management Project (IUFMP) partly sponsored by the World Bank. There were steps to carry out that project through the loan from the World Bank. But the loan needed repaying. By June 7, 2019, the World Bank Report on the IUFMP stated that 4 of the 18 ongoing works have been completed. Whereas the Eleyele Dam rehabilitation was 20% completed, and the 13 other Priority Sites were 5% complete. Well, we knew this was an important project that would greatly impact our State. So, we set aside funds to start repaying the World Bank loan to ensure that the project did not stall.

By 2021, all 18 priority rehabilitation sites including the Eleyele Dam rehabilitation had been completed. The impact of that completion far exceeded the end of project expectations. Over 100,000 persons directly benefited from the project. 17 flood prone areas were made flood resilient while 9,000 hectares of land were protected from the 25-year return period of flood.

And so, this is one case where our proactiveness paid off. Since this project was completed, we have not had any severe case of flooding in Oyo State. Yes, this past week, we have had a few cases of flash flooding. But nothing as severe as the 2011 situation. Of course, our actions are still work in progress.

The other issue we have faced in Oyo State is farmer-herder clashes. As stated earlier, this was a recurring issue before we came into office. In fact, we made the resulting security threats a campaign issue. Well, you all know based on our constitution, the Governors are Chief Security Officers of their states in name only. So, we had to find a way around these issues somehow.

Fortunately, the opportunity came through the Western Security Network codenamed Amotekun. As a state, we were at the forefront of meetings with other South-West Governors to ensure that this project became a reality. It was important to make this a regional outfit because of the overlap of forests and borders. Presently, five of the six states in the South-West have so far, implemented it.

In Oyo State, we prioritised Amotekun. The goal was not to target any ethnic group. We made it clear who the real enemies were. Our people have been dwelling together for years peacefully with herdsmen, so we knew that we could restore that harmony if we resorted to community policing and ensuring that conflicts are resolved quickly.

The result is that we our farmers are back to their farms and we get very few reports of infractions from these once conflict-prone zones.

This is another case study of how looking for local solutions to global challenges is working for us in Oyo State. These days, the people of Oyo State cannot imagine life without Amotekun. Yes, the system is not perfect but it is far better than anything we had before it.

Now let me talk about how we are meeting the third challenge. As mentioned earlier, this has to do with waste management. Creating a sustainable system requires the type of investment that government is unable to bear alone. Aside from the investment requirement, there is also the matter of the people and their mindset. Waste management is more of a lifestyle change. Our people say you don’t bend a fish after you have roasted it. So, we are using a mixture of a high dose of sensitisation and a bit of enforcement to create this new culture. Of course, at some point, we would have to wield the big stick.

We know that a long-term solution lies in creating a sustainable waste management system where the 3R’s, Reduce, Reuse and Recycle is practiced. We are not there yet, but plans are underway and I can predict that all things going as planned, in a year or two, other states will come and ask how we effected the waste management turn-around in Oyo State.

In all, climate change is a global problem. But what the Oyo State example has shown is that we cannot import solutions to these challenges. Rather, we need to look inwards to find solutions that will work for us.

Whether the cause of the challenges we are facing are acts of God or manmade, the fact remains that we have to take certain actions to put an end to them. As governments, we must take proactive measures, just as we did with the Ibadan Urban Flood Management Project (IUFMP). We could have chosen to play politics with it and say we will not repay the loan because we did not take it. But governance should always transcend politics.

In the case of the Western Nigeria Security Network, we could have refused to work with other South-Western states. Afterall, we were the only PDP State in the region. But again, governance should always transcend politics.

And so, if there is one thing you should take away from this lecture. It is the fact that to adequately confront the global climate challenges, we must ignore the politics and pay attention to the effects. We will do well to look away from the symptoms and give priority to the immediate and remote causes of these problems.

Before I leave the podium, let me once again thank the organisers for giving me the opportunity to share some of the things we are doing in Oyo State to battle the challenges presented by climate change with you and I hope you find the insights shared helpful.

Thank you and God bless you.