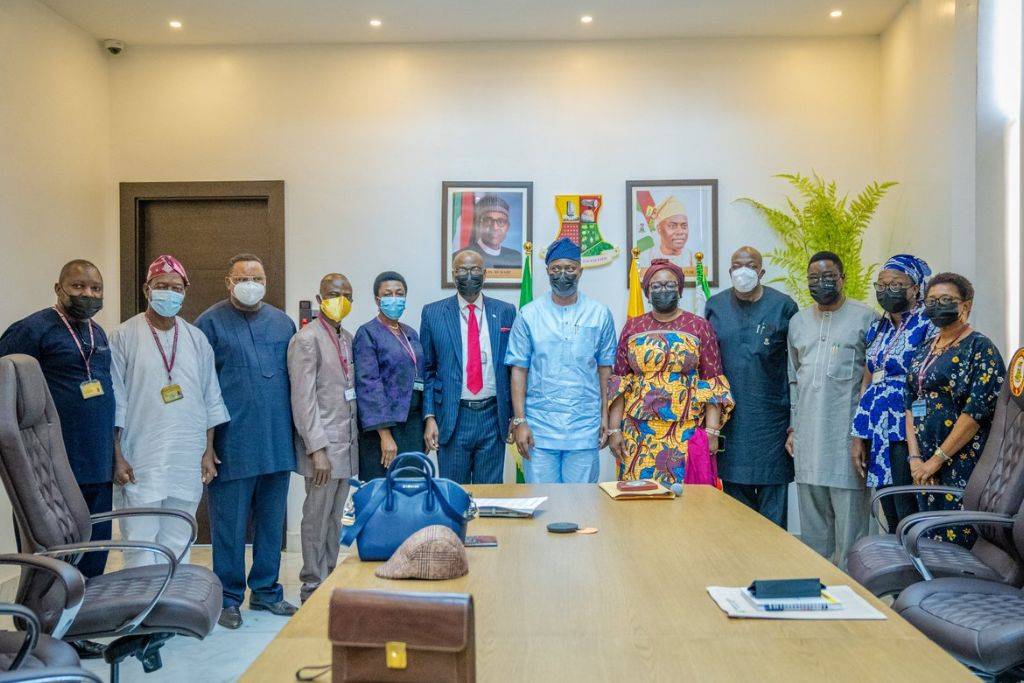 …hosts UNILAG VC, others, promises to back varsity for NUGA games

*You are a worthy alumnus, VC tells Makinde

Oyo State Governor, ‘Seyi Makinde, stated on Friday that for the country to solve some of its problems, Governments at all levels, industries and academia would have to collaborate.

Governor Makinde, who stated this while receiving a delegation of the University of Lagos, Akoka, led by its Vice-Chancellor, Professor Toyin Ogundipe, at his office, inside the Secretariat, Agodi, Ibadan, called for an improvement of the relationship between the town and gown, adding that the two should maintain a mutually beneficial relationship.

Some of the other members of the delegation include the newly-appointed Deputy Vice Chancellor (Development Services), Professor Ayodele Atsenuwa, and the University’s Registrar, Mr. Oladejo Azeez.

A statement by Mr. Taiwo Adisa, the Chief Press Secretary to the Governor,  quoted Makinde as saying that Oyo State would explore the opportunity of having a Memorandum of Understanding with UNILAG on how to address some of the challenges facing the State.

Expressing the State’s readiness to work with the UNILAG Consult, given its pedigree and antecedents, Governor Makinde, who reminisced on how he used to run on the concrete road in UNILAG, said his administration tried to introduce the innovation in Oyo with the ongoing 12 kilometre Apete-Awotan Road, which is being constructed with concrete.

According to Makinde, though the State already has an MoU and cordial relationship with the University of Ibadan and the International Institute for Tropical Agriculture (IITA), he would readily expand the MOU to include UNILAG.

He said: “I want to take this opportunity to let you know that we followed the crisis that engulfed UNILAG recently, and we are happy that things have been resolved and you are getting back into the real business of why the university was created, and you are fulfilling your mandate as a university.

“Yes, a crisis is what we go through as human beings, but I am glad that you were able to resolve it and things are back on track.”

According to the Governor, his history of collaborating with UNILAG dates back to his days as an industry player, saying: “Personally, while I was in the industry, I actually collaborated with UNILAG. I was running a project around 2004 with AGIP and they were going to test some of our systems and they wanted us to take it to Milan in Italy.

“I came to UNILAG and approached the Electrical Engineering Department because I knew I carried out the experiment at the machines laboratory there. So, we brought Italians there and the test was conducted successfully.

“After that, we thought of other things to do to collaborate between the industry and the university and that was what birthed the Automation Laboratory.

“Actually, when we were running the project, we got into a situation where we were looking for people to power PSCs all over the place. I went everywhere in Nigeria looking for Curriculum Vitae but eventually, they were sending me people of 22, 23 years old from the Philippines. I thought how do we ensure we have young engineers that can get into PSC programming. I am not sure how deep the programme is now but from that exercise and some of the things we did in-house, we were able to produce a lot of young engineers coming out of schools; that got into PSC programming.”

While responding to the institution’s request for support towards the hosting of the Nigeria Universities Games Association (NUGA) events later in the year, the Governor assured that the State would support the university, while he would also make his contribution as a private citizen.

Earlier, UNILAG’s Vice-Chancellor, Prof. Ogundipe, had described Makinde as a worthy and distinguished alumnus, even as he expressed the readiness of the institution to partner with Oyo State on how to reduce unemployment and promote entrepreneurship.

Ogundipe said: “The university community wants to congratulate you as a worthy alumnus and the Governor of Oyo State. We are certain that the people of the State repose confidence in you because of your track record.

“We will be ready to partner with you on the issue of unemployment that we have now. We are collaborating with some Local Governments in that area but for Oyo State, what we can do right now is to send some of our colleagues to come and train them in different areas of interest for the SMEs and the rest. So, we look forward to having your support in that area.

“Later this year, we will be hosting NUGA games, which we were supposed to have hosted about two years ago. But by November, we are looking for the possibility of hosting the game and we look forward to having your support, one, as an alumnus and, second, as the Governor of the State.

“I want to appreciate you again for cutting short your trip because of the interest you have for the UNILAG.”