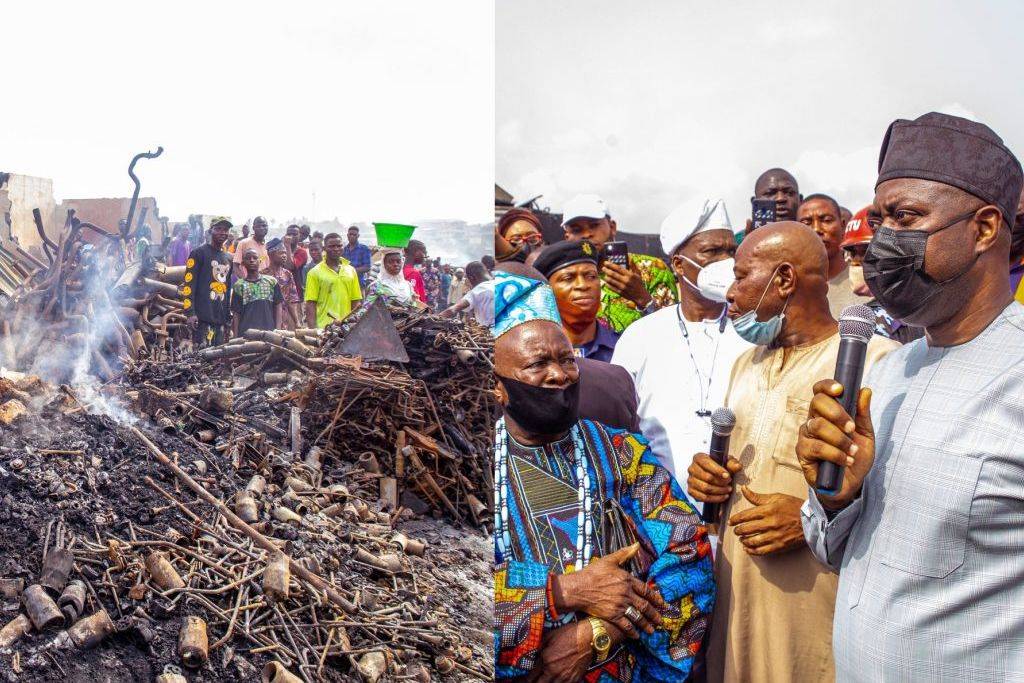 Governor ‘Seyi Makinde of Oyo State, on Sunday, visited the burnt down Agodi Gate Auto spare parts Market in Ibadan to assess the extent of damage done by the fire incident, which occurred in the early hours of Saturday.

The Governor, who inspected the market alongside top Government functionaries, expressed shock and sadness over the loss of goods worth millions of Naira.

He said that he would hold a meeting with leaders of the market to find common grounds on ways of resolving the travails of the market.

The Governor also promised that his administration will come to the aid of victims of the inferno by providing palliatives within the shortest possible time.

He said: “I greet every one of you here this afternoon. I have seen the extent of destruction and I know how important this market is to the economy of Oyo State.

“I was here during the electioneering and interacted with you. I am still trying to process in my head the way forward but I want to let you know that the Government will come to your aid.

“We won’t allow you to bear the brunt alone. So, I will ask the leadership to send your representatives. And by tomorrow (Monday), we will sit together and look at the immediate palliative we can do for you.

“The second thing is, I want all of you to go and think about it very well; is it time for us to move this market to a far more organized setting? “Please, think about it. Do we need to move this market to a better place that will be more comfortable and spacious for everyone to stay in? It is a decision that we need to all take together because I don’t want any reoccurrence of this in the State. And the only way for us to ensure that we don’t witness anything like this again is for us to sit down and think of a solution that will endure.

He asked leaders of the market to start compiling the list of shop owners who were affected by the fire, adding that “within the next one or two weeks the State will make a decision on the market generally.”

According to him, even if the market will remain in  the present location, “we need to see how we can arrange ourselves such that this kind of thing won’t happen again.”

The President of the market traders, Mr Moruf Olanrewaju, took the Governor and his entourage round the market to see the level of destruction.

Governor Makinde also sympathized with the victims of the inferno and promised to assist them.

Though he hinted that the market might be moved to a more spacious location, he stated that the final decision would be taken collective by the Government and representatives of the traders.

He directed the market leaders to organise themselves and send their representatives to his office on Monday, April 5, for a crucial deliberation on the way forward.

It will be recalled that the auto spare parts market in Agodi, Ibadan, was razed by fire in the early hours of Saturday April 3, 2021.

The inferno was said to have started from the tyre section of the market before it spread to other parts of the market.

Though men of the State fire service responded promptly, they couldn’t curtail the raging fire as their trucks were unable to reach the interior of the market due to blockage of access road.