Iseyin-Ogbomoso Road: I’m Happy It Is Happening In My Time – Aseyin 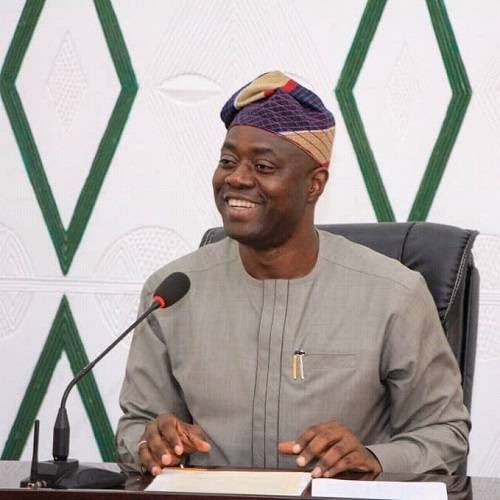 The Aseyin of Iseyin, Oba (Dr) Abd-Ganiy Salaudeen Adekunle Oloogunebi (Ajinnese 1) has expressed his joy over the announcement by Oyo State Government that it would soon start the construction of Iseyin-Ogbomoso road.

The State Government announced on Wednesday the approval for the construction of the 44kilometers Atoori- Iseyin Township Stadium road to Ogbomoso alongside other major projects like the upgrade of the Ibadan Airport, construction of Ibadan Circular Ring-road, development of Ibadan Dry Port and upgrade of State hospitals in each senatorial district of the State with what it called a #100billion ‘Oyo Prosperity Bond’, to be sourced in two tranches of #50billion apiece.

Speaking with newsmen after the announcement on Wednesday evening, Oba Oloogunebi said he was happy such development would be happening during his reign, as the Iseyin-Ogbomoso road was an ancient road that portended commercial prosperity.

He said Governor Seyi Makinde has etched his name in gold in the minds of Iseyin people, claiming that the construction also held a particular significance of reconnecting Iseyin people with ancentral ties with the people of Ilorin in Kwara State.

“I’m the happiest person on earth today, when I arrived from Abuja this Wednesday morning and I got a call informing me about the State Executive Council’s decision on the Iseyin-Ogbomoso road project, I looked up and thanked my ancestors.

“For those who do not know, this almost 44kilometers road hold an ancentral link with some notable family houses in Iseyin and Ilorin and most importantly has the best commercial prosperity one can think of, this Governor is etching his name in gold, Iseyin people will never forget him for good.

“Look at what the State is doing on the Moniya-Iseyin road that was almost jinxed, the traveling hour to Ibadan now is shorter and you will hardly see any vehicle broken down along the way, that is the consequence of good road.”

He urged those criticising the Governor over the administration’s efforts at developing the State’s social infrastructure with private bond to sheath their swords and join Governor Makinde in taking the State to the best level.

The revered monarch said it would be pointless to fight a performing Government as it would be tantamount to fighting a physician that was struggling to safe life.

“They should rather sit with the Governor and forge a better path to glory for our State instead of fighting a performing Government, he is like a good physician struggling to safe your life and you are there claiming you are fighting him.

“Makinde has shown with his actions since the inception of his administration that he is cool, calculative and a listening Governor,” Aseyin said.

The National President, Iseyin Development Union (I.D.U), Alhaji Bayo Raji saluted the courage of the Governor for daring to take giant steps towards commercial development in the face of global economic crisis, occasioned by the Covid-19 pandemic.

He urged support for the policies and programmes of the Government for the administration to achieve more in its stride to make Oyo State the best in the league of other States in Nigeria.

In his own words, a leader of All Progressive Congress in Oyo State who is an indigene of Iseyin, Alhaji Kazeem Olalekan said the project was a welcome development as it would have direct positive economic impacts on the people.

Olalekan said politics should not be allowed to hinder the State’s progress as according to him, the Governor held a flag representing the people more than he represented his party, People’s Democratic Party (PDP).

“Governor Seyi Makinde is for the people than he is for PDP, look at the implications of this construction of Iseyin-Ogbomoso road when completed, it is going to benefit all no matter the political difference, let us not muddle politics with social development, we thank Governor Makinde.”

The Park Manager for Iseyin Local Government, Comrade Yekeen Alesinloye said the development held a sign of good things to come for his co-transporters as the Iseyin-Ogbomoso road would reduce traveling hours and help put a stop to loss of lives to accidents along the dilapidated Oyo-Ogbomoso road.

While speaking with journalists, the Caretaker Chairman, Iseyin Local Government, Hon. Mufutau Abilawon said the major take in the approval for the construction of Iseyin-Ogbomoso road would be the enhancement of agricultural growth at the particular corridor where the construction would take place.

He called on the people of the State to rally round the present administration under the leadership of Governor Seyi Makinde to further enjoy maximum benefits from democratic Government.