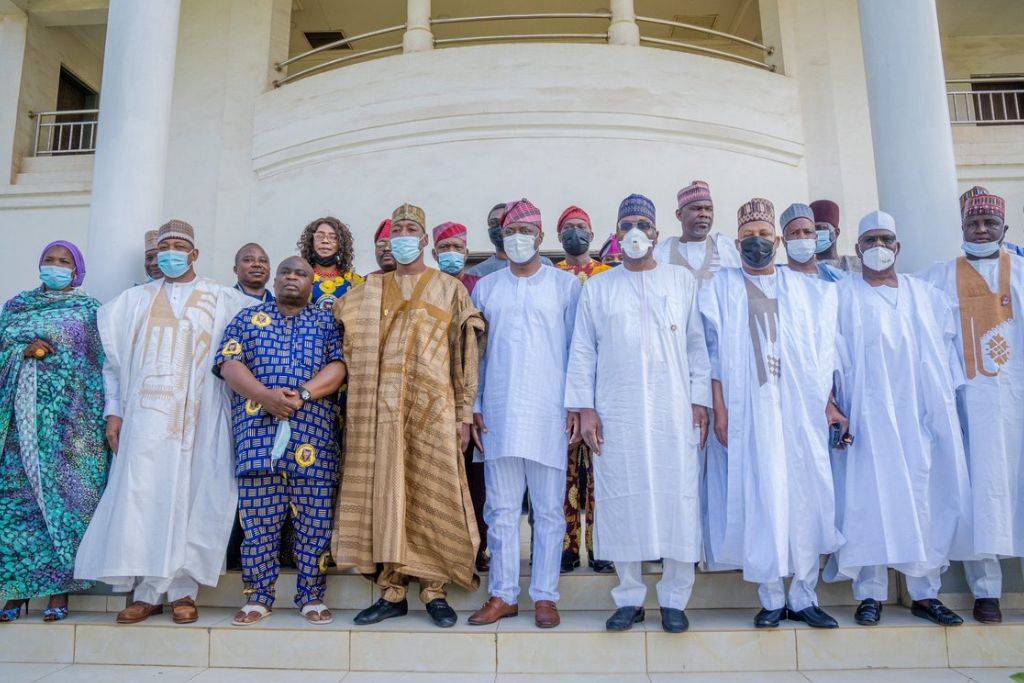 Oyo State Governor, ‘Seyi Makinde, on Saturday, called on leaders in the country to shun partisanship and come together to mount a collective fight against  insecurity in the country.

The Governor, who stated this while hosting  the Governors of Borno, Prof Babagana Umara Zulum, his Kwara State counterpart,  Governor

AbdulRahman AbdulRazaq,  and a former Governor of Borno State, Senator Kashim Shettima, at the Government House, Agodi, Ibadan, commended Governor Zulum for his efforts in tackling insurgency and banditry in the State.

He also congratulated him for a well-deserved award being conferred on him by the University of Ibadan Alumni Association, Worldwide.

“I also want to thank you for stopping by. What that demonstrates is that it has nothing to do with party affiliation. Governance is something that is collective and the focus is the same. I have had the opportunity to host here my brother, the Governor of Kwara State and we are also collaborating. When he came, we visited IITA together. Some of the programmes that we are collaborating with IITA on,  now they want to have them in Kwara.

“Also, we have set up a team to go to Kwara and we want to learn some of the good things they are doing there and collaborate. And we believe this is the only way we can develop our country.

“So, I want to thank you for this visit and also thank you for your concern for us in Oyo State; first with the crisis in Sasa and the recent fire incident at the spare parts market.

“We thank you for standing by us at this moment of need. Also, we want to acknowledge your hard work in Borno State, especially as it concerns insecurity in that axis. We want to encourage you and we want you to know that we are praying for you and by God’s grace, you will succeed.

“Yes we know that our country is currently going through issues and challenges, but as leaders, at this point in time, it is a time for us to come together. It is not about sentiments because we have to explain to our people, the citizens, the residents of our various places, our various States that countries do go through challenges but when the leaders cast aside partisanship, come together to tackle that problem, then we have a chance to succeed.

“So, I want to encourage all our leaders in the North-East who are facing security issues. Even yesterday, we were at Benue in Makurdi and they have challenges also. Three or four days ago, I was in Sokoto and Zamfara.  They have banditry but these are not challenges that we cannot surmount. The only thing that we need is for us, as leaders, to pull together. And for me, I offer myself irrespective of party, to build bridges that will ensure that we come together to defeat all the problems that we are currently having.

“So, this courtesy visit is timely and it is a demonstration to the whole world that we are together in the task of building our nation.  I thank you for stopping by.”

Earlier, the Borno State Governor, Prof. Zulum, said that the visit was meant to commiserate with the Governor over the crisis in Sasa and the fire incident that engulfed the spare parts market in Ibadan.

He prayed that such incidents would never happen again.

He said: “We decided to pay the Governor a visit over the recent unfortunate incidents that happened in Oyo State. The most recent one is the inferno at the spare parts village here in Ibadan. We continue to pray that such an incident will never happen again.

“This is not as a fact of coincidence but because of the peace that we (had) in Ibadan.

“We walked across the length and breadth of this ancient city – Shasa, Ojo, Mokola, Sango, Gate, Bodija – across everywhere to look for some of our delicious foods – ewedu, amala. It has been a very nice stay for all of us and I hope we do not allow sentiments to destroy the very important culture of these great people here in Ibadan.”

He called on people to continue to live in peace and harmony for the betterment of Nigeria.

“We will continue to stay together, live in peace and harmony for the betterment of Nigeria. We are most grateful for the warm reception accorded to us,” the Governor said.