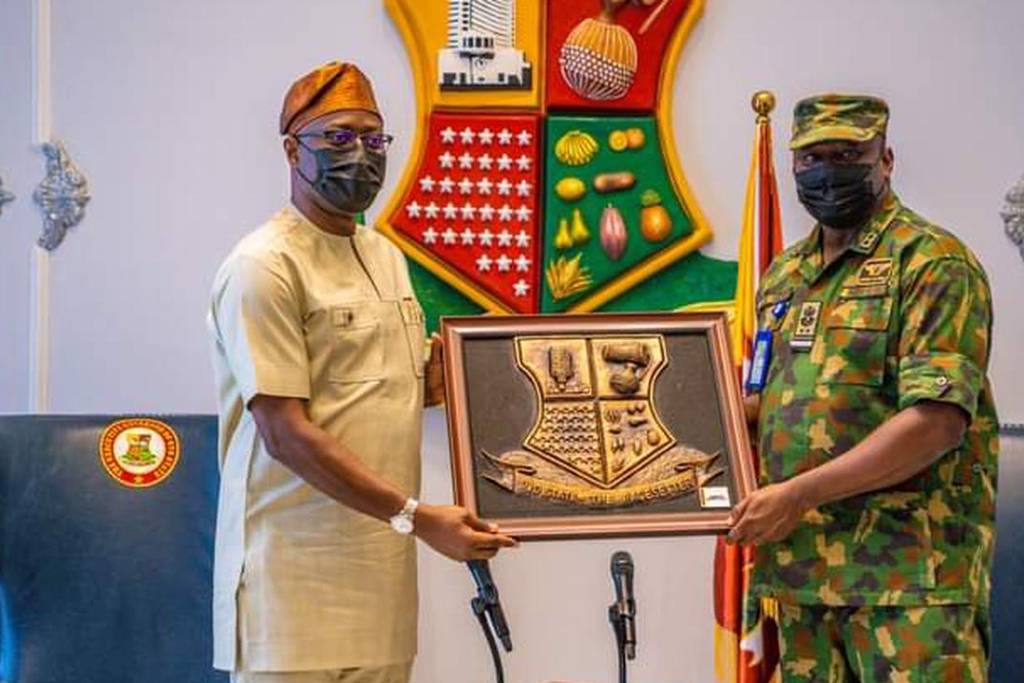 Oyo State Governor, ‘Seyi Makinde, on Monday, lauded the Nigerian Air Force for its unalloyed cooperation in keeping Oyo State safe, pledging that his administration will continue to work with the Force and other security agencies to fight insecurity in the state.

The Governor, who stated this while receiving the Air Officer Commanding, Logistics Command, Ikeja, Lagos, Air Vice Marshal Charles Ohwo, and his team, during a courtesy visit to his office, added that the state has been enjoying a cordial relationship with the Air Force.

A statement by the Chief Press Secretary to the Governor, Mr. Taiwo Adisa, indicated that the Governor equally reiterated his commitment to upgrading the Ibadan Airport, noting that plans are in top gear by the State Government to extend the runway from the current 2.7 kilometres to 3.3 kilometres to enable bigger aircrafts to land.

The governor added that his administration will continue to expand the footprints of the Nigerian Air Force in the state, adding that the Force will be well supported through a special support fund under his office in next year’s budget.

He said: “We are happy with the cooperation that we have enjoyed from the Air Force in Oyo State. Thanks to Air Commodore S. Peter, who is a member of the Oyo State Security Council and who has always provided useful counsel; and, infact, we are having a meeting right after this courtesy visit.

“We are excited that we are expanding the footprint of the Nigerian Air Force here with the planned Airforce Base and whenever the Chief of Air Staff is ready, we are ready to do the groundbreaking.

“We just constituted the Oyo State Executive Council and we have a new Commissioner for Lands and Urban Planning, and one of his tasks is to ensure that compensation is paid for the land we are providing for the base.

“Also, I have in our next year’s budget under my office, a special fund we can use to support this kind of programme.”

Governor Makinde added that as part of his Government’s efforts to upgrade the Airport, all roads leading to the facility have been awarded for construction, noting that the government has equally awarded the contract for the building of a fuel dispensing facility in the Airport.

“We are excited about that possibility and we are also currently doing some projects around the Airport. All the roads leading to the Airport have been awarded and we are just waiting for the contractors to mobilise to sites. We have also awarded the contract for the fuel dispensing facility at the Airport.

“We are doing everything here to ensure that the Airport is fully upgraded and we also have the project to extend the runway from the current 2.7 kilometres to 3.3 kilometres so that bigger aircrafts can land in there.

“So, we are happy to have you here and equally pledge that we will continue to cooperate with the Nigerian Air Force and other security agencies in Oyo State,” he said.

The Governor, who maintained that the country had been going through a difficult period and that the current set of leaders of our country has been quite challenged, said the names of members of the Armed Forces will be written in gold for their efforts in stemming the tide of insecurity at this point in the nation’s history.

Earlier in his remarks, the Air Officer Commanding, Logistics Command, Ikeja, Lagos, Air Vice Marshal Ohwo, commended the leadership style of Governor Makinde, saying he is impressed by the infrastructural projects being carried out in the state.

“I am here and want to use this opportunity to thank you for everything you have been doing. I commend your leadership style. I passed through many roads and saw the impressive transformation in the infrastructure projects. So, I am impressed with your administration,” the Air Vice Marshal said.

He further appreciated the governor for the support he has given the Force so far, including the piece of land for the Air Force Base, new school building, transformer and other equipment donated by his Government.

“You have done so much for other services including the Nigerian Air Force. I want to specifically thank you for the piece of land you gave to the Nigerian Air Force to put up a befitting Air Force base. Before coming here, I spoke to the Chief of the Air Staff. It is his desire to also appreciate you for the support for our school and the transformer you donated and all other projects.

“He, however, assured that the Air Force will be willing and ready to contribute its quota to ensure that the South-West and, specifically, Oyo State is safe”, Ohwo concluded.