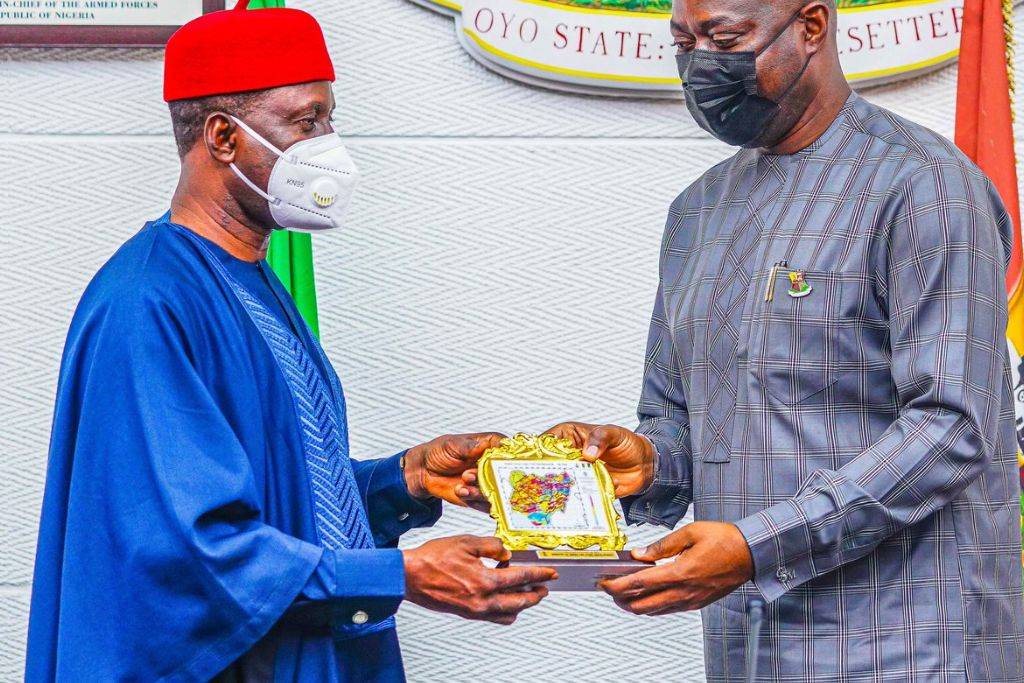 …Says item should be delisted from Exclusive legislative list

Oyo State Governor, ‘Seyi Makinde, on Tuesday, called for a review of the exclusive legislative list of the Federal Government in the 1999 Constitution so as to delist the control of mineral resources from the list.

The Governor, who spoke during a courtesy visit on him by the Minister of State for Mines and Steel Development, Dr. Uchechukwu Ogah as well as while attending the opening ceremony of the 56th Annual International Conference and Exhibition of the Nigerian Mining and Geosciences Society (NMGS) in Ibadan, said that Oyo State was ready to partner with the Federal Government to develop the solid minerals sector in a bid to boost revenue generation.

While addressing participants of the annual conference, Makinde said that it was important that the control of mineral resources be delisted from the exclusive legislative list so as to help unlock the potentials of the sector for economic growth.

He said that the State would readily support the national aspiration on the mining sector‘s commitment to the development of the sector and informed the provision of two hectres of land for the international gemstone market in the Akinyele area of the State.

A statement by the Chief Press Secretary to the Governor, Mr. Taiwo Adisa, explained the readiness of Makinde’s administration to join hands with the Federal Government to develop the international gemstone market located in Ibadan, the State capital.

He added that if mineral resources are well-harnessed, the country can potentially improve its revenue generation.

Makinde said: “Mineral development and exploration are currently placed on the exclusive list of the Nigerian Constitution. This has retarded the development of the sector and eliminated direct state and local people’s participation.

“We know what this means in real terms: the State and the people have to wait to get a share of their natural resources instead of being the ones to share them.

“Well, the good news is that recently, Zamfara State was allowed to mine and own its gold deposits. It signals that it is time to again push for resource control for all States. As a matter of fact and urgency, here in Oyo State, we call for the delisting of the mineral resource ownership and development from the exclusive list.”

At the 56th annual conference of the society, held at the University of Ibadan International Conference Centre, Ibadan, where the Governor was conferred with a Fellowship of the Society, Makinde said that the decision to host the conference falls within his Government’s agenda to diversify the economy.

He said: “We are here to support the national aspirations and that is why when the Executive Chairman of the Oyo State Solid Mineral Development Agency, Biodun Oni, and the Honourable Minister came and said we should give land for the gemstone market, we urgently moved ahead to do that.

“So, we will work together to ensure that it is developed rapidly.

“I must also mention that Ojoo (Ibadan) is probably where prices of most minerals are determined for Nigeria. It is an underground market but we want them to come into the open, trade freely and pay necessary taxes to the Government.

“So, I will ask that the ministry should work with us to develop the market and we are ready to do everything possible to ensure it takes off as quickly as possible.”

“Oyo State is blessed. The diversification of our economy is also broken into three broad areas based on the comparative advantage that we have in Oyo State. We are looking at agriculture and agro-processing simply because Oyo State has a landmass of about 29,000square kilometres.

“The same thing with infrastructure. We are located 110km outside of Lagos. If you are going anywhere in the Northern part of the country and you have to go by road, you must pass through Oyo State. So, we are out there, and if our infrastructure targets our economy, we believe a lot of people will come, and we can utilize that to expand our economy.

“Also, we believe that if we have to move away from oil, solid mineral development is an area that should assist us to wean us from just waiting for oil money to come from Abuja.”

The Governor maintained that the present administration in the State has provided a conducive environment for all the investors to thrive, saying the State has a framework that is designed to make our State a mining destination that is attractive to local and foreign investors.

“For the mining sector, we have a framework for the systematic development of our mineral potentials. It is designed to make our State a mining destination, attractive to local and foreign investors.

“Our people from the Pacesetter Mineral Development Company (PMDC) and the Oyo State Mineral Development Agency (OYSMIDA) are present here today. They are ready to talk to you about this framework but let me lead by saying we have three entry levels for investors.”

Governor Makinde explained that if the natural resources that are available in the State can be tapped, it will enhance the economy of the State.

Earlier, the Minister of State, Mines and Steel Development, Dr. Ogah, said he was in the State on a working visit to attend the 56th Annual International Conference of the Nigerian Society of Geoscientists and Exhibitions, held in Ibadan.

He said the courtesy visit was to greet the Governor and share with him some worthwhile thoughts that impact positively on mutual interests of his (Makinde) Government and the Ministry of Mines and Steel Development.

Ogah tasked the Oyo State Government on the need for both governments to cherish and sustain mutually beneficial partnership on mining development.

He noted that Oyo State is richly endowed with different types of mineral resources in commercial quantity and grade in several locations across the State.

The minister, who appreciated the State Government for the donation of two hectares of land for the gemstone market, pointed out that the development showed commitment to enhancing the development of the solid minerals sector and increase the Internally Generated Revenue, IGR of the State.

According to him, these minerals are being explored and exploited by different mining companies including precious stones such as tourmaline, aquamarine, Amethyst, agate, garnet, crystal quartz etc.

He said: “Our primary goal is to use the industry as a springboard for the generation of well-paying jobs for our teeming unemployed youth population; creation of wealth and empowerment of our rural communities; enhancing Government revenue-generating capacity; supply of mineral raw materials for industrial and economic development; and increasing foreign exchange earnings for the country,” he explained.

Similarly, while declaring the opening ceremony of the conference open, President Muhammadu Buhari, who was represented by the minister of State said his administration is committed to diversifying the nation’s economy away from dependence on oil and gas, using mining and agriculture sectors as viable options.

He added that his administration will continue to engage professional bodies in the development of Nigeria, adding that the centrality of the development of the mineral and energy sectors in the rejigging of the nation’s economy had necessitated the roll-out of a series of policy initiatives aimed at ensuring the economic growth of the country.