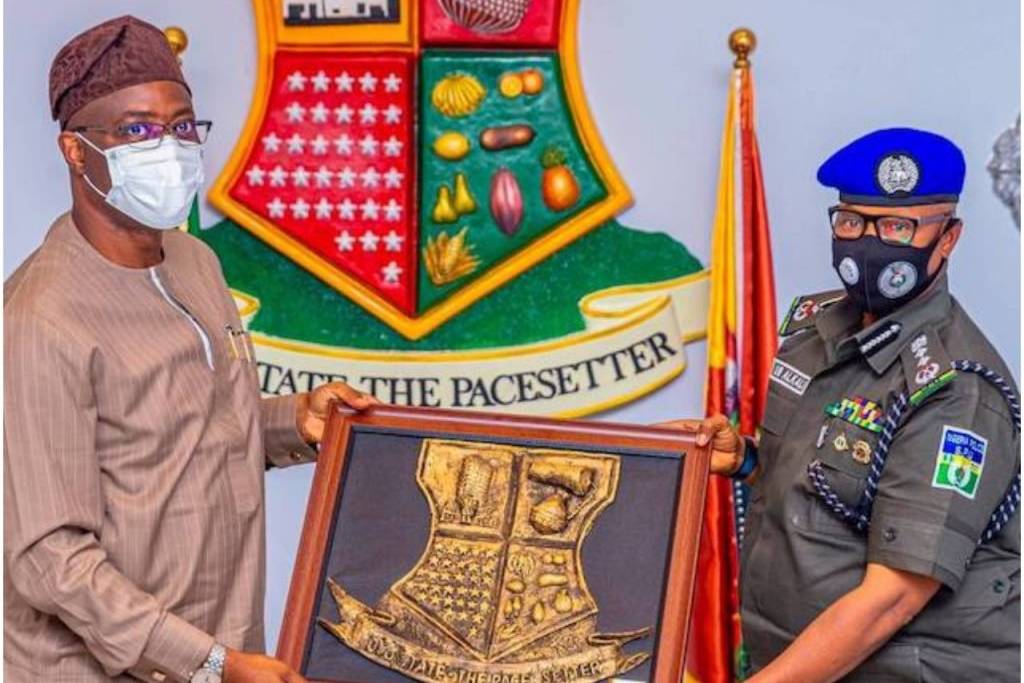 Oyo State Governor, ’Seyi Makinde, on Tuesday, requested the approval of another Mobile Police Squadron Base to be cited in Oyo town in the State.

He said that the development would help nip security challenges in the State in the bud.

Makinde, who made the request while hosting the Inspector General of Police (IGP) Usman Alkali Baba in his office, stated that the immediate past IGP had given a verbal approval for the Mobile Squadron before his retirement.

He added that his administration will always remain committed to supporting the Police and other security agencies in the State.

A statement by the Chief Press Secretary to the Governor, Mr. Taiwo indicated that the Governor equally commended officers and men of the Oyo State Command of Nigeria Police for helping to stem the spate of insecurity in the State.

Makinde said: “I came to your predecessor a few months before he left. He granted us the approval to set up the MOPOL unit at Ago-Are, which we did and they are working well.

“It has assisted us to look at all the security challenges around the Northern part of Oyo State but we felt we still require another MOPOL Squadron. I think he verbally approved another Squadron to be cited at Oyo town.

“We discussed with the traditional institutions out there and also the people of Oyo. They are ready to give us land and, as a Government, we are ready to provide the basic infrastructure to enable them to move in there.

“So, I will use this opportunity to make that request and we hope we will find favour in you to execute this new Mobile Police squadron to kick it off.

“We are not afraid to try new things here. We know that if we are faced with any type of challenge, if we have a go at it and solve it, it will disappear. But if we don’t, it will come back and we have another go at it. So, whatever we need to do will be done.”

Governor Makinde, who welcomed the new IGP and also congratulated him on his appointment and commended the Oyo State Police Command for trying its best and cooperating with other security agencies in securing lives and properties of Oyo State residents.

He pledged to keep supporting their efforts at the State or Zonal level, saying: “I want to acknowledge the fact that the Police Command in Oyo State has been trying its best. “They have cooperated with our people and all the security agencies.

“When we started Amotekun, it was a hostile venture because the Police felt we were getting people to come and take over their jobs and responsibilities. But over these few months, with the leadership of Police in the State, we have had serious cooperation and the inter-agency rivalry or skirmishes is to the barest minimum in Oyo State.”

He equally explained that his administration will keep going after criminals no matter where they come from or any ethnic background.

“Also, when these crises started, people were trying to stoke ethnic tension, we all rose to the occasion and the message to everybody was very clear.

“In Oyo State, we are after criminals and we don’t care about where they are from. And we know that criminals abound in every ethnic group. In Oyo State, we even have a situation where people went to rob a bank at Okeho and when those people were eventually caught, we discovered they were from Kogi State.

“So, we don’t profile anybody based on their ethnic background but, like you mentioned that you served at Igbo-Ora, Ibarapa happens to be a frontier Local Government for us. From Ibarapa, all the way to Oke-Ogun, Saki, we share an international border with the Republic of Benin. So, that makes this place unique and peculiar. But, we have all cooperated and tried our best to keep the peace.”

Earlier, the Inspector General of Police (IGP), Mr. Alkali, said the visit was to go round the 36 states including the FCT to talk to men and officers in the states and request for the cooperation of the chief security officers and the traditional institutions in the States.

He said: “My vision is part of the engagement I took upon myself, which is to go round the 36 States even in the FCT where I have worked for a very long time, in talking to my men and also visiting the police officers in the States, the traditional institutions and other stakeholders.

“This is because I know they are in control of maintaining law and order, the same thing that requires collaboration, synergy and cooperation.

“I want to talk to other stakeholders on the issue of community policing, which is an adopted strategy. It has not been effectively used by both the Government and members of the public and we have two versions of it. We have embarked on it and my predecessor has done much in looking into policing programmes. And I need to continue from where he stopped, by getting people and your continuous support.

“It is believed that it is a programme that we can use people of a community who know their counter value in policing, who know the nooks and cranny of the place to ensure that law and order are to be abided by the community and control it to the barest minimum.”

The IGP said that the Police will soon commence the recruitment of men from all of the 774 Local Governments across the country in line with the mandate earlier given by the Federal Government to recruit 10,000 policemen annually for six years.

According to him, the Force had issues recruiting in 2019 and 2020, adding that all approvals have now been secured to commence the backlog of recruitment amounting to 20,000 men.