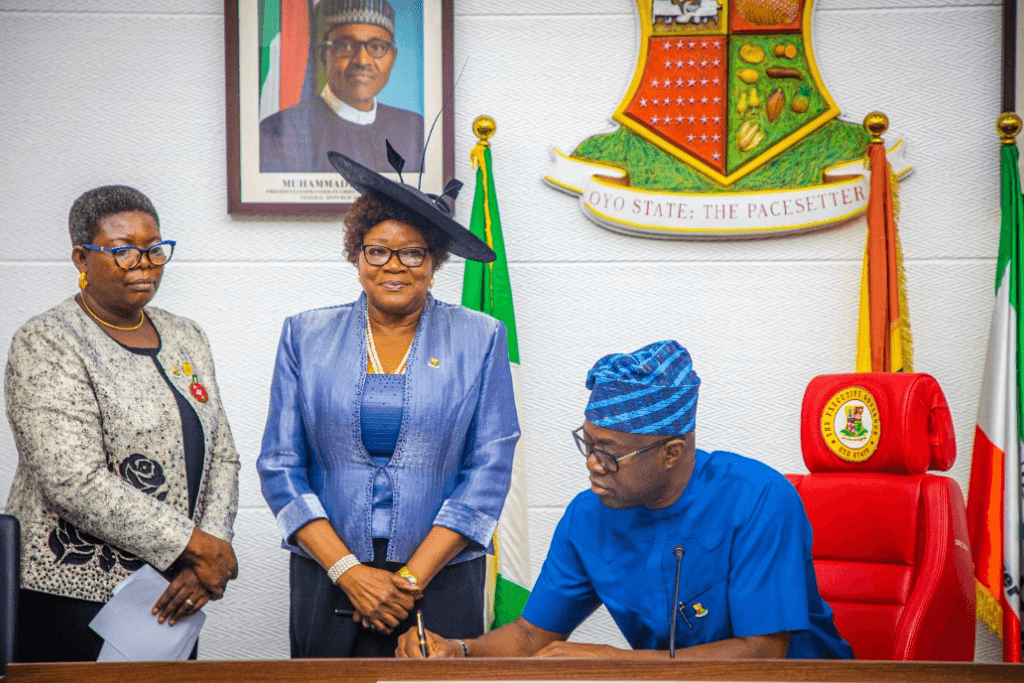 …promises continuous mutual relationship with other arms of Govt.

Oyo State Governor, ‘Seyi Makinde, on Monday, swore in Justice Iyabo Yerima as the Acting Chief Judge of the state.

The Governor noted that his administration will continue to work with all other arms of Government to ensure a system that the people of Oyo State will be proud of.

Governor Makinde, while speaking at the ceremony held at the Executive Chamber of the Governor’s Office, Secretariat, Ibadan, said that his administration will give Justice Yerima the support needed to carry out her duties diligently.

The Governor, who expressed confidence in the Acting Chief Judge’s ability to steer the ship of the judiciary in the state, saying she is fit and up to the task.

The Governor explained that when re-elected, his administration will even do more to reduce the infrastructure deficit in the judiciary and complete the work of modernising the arm of Government.

He said: “When we promised our people that the campaign will not disturb governance, this is exactly what we are talking about. We went out to campaign on Saturday and we know that our responsibility to the people of Oyo State, under this current tenure, will end on the night of May 28. Between now and then, they should hold us accountable and we will keep delivering good governance to them.

“Well, some people may wonder why we are swearing-in a Chief Judge in an acting capacity instead of a substantive Chief Judge. “Well, there is a process. We will have to wait for the National Judicial Council (NJC) to send us their recommendation.

“So, while we await that, as they say in the judicial circle, ‘nature abhors vaccum,’ we have to fill in this vacuum in accordance with Section 271 (4) of the Constitution of the Federal Republic of Nigeria, 1999 as amended.

“I must say that the fact Justice Yerima is the acting Chief Judge, it does not remove anything from her abilities, and on numerous occasions, she has acted on behalf of Hon. Justice Muntar Abimbola (rtd). So, she is up to the task and we have no fears about giving her this official recognition.

“Of course, for me, I brought in the first female SSG, and then I have the Head of Service, who is also a woman.”

The Governor equally promised to give the new Acting CJ the necessary support needed to perform her duties, saying: “While Justice Yerima is serving, we will give her all the support needed to carry out her work as we did with the former Chief Judge.

“We all know that the Executive and the Judiciary are separate arms of Government but working harmoniously will produce a kind of system that the people of Oyo State will be proud of.

“Our administration is always more interested in the office than in the person as that is how good system operates. “We are sure that if treated with the right level of honour and dignity, then, whoever occupies the seat, whether temporarily or permanently, will become a beneficiary. That is exactly what is happening,” he added.

“Again, let me reaffirm our administration’s commitment to continue to work with all other arms of Government to ensure the system of governance in Oyo State is working.

“Aside from collaboration, the Ministry of Justice and the Judiciary, at the policy level, have awarded the contract for the rehabilitation of the High Court Complex at Ring-road and Magistrate Court at Iyaganku.

“The rehabilitation work is ongoing, though a little bit slow, which is a function of the resources, but we believe when we return under Omituntun 2.0, we will even do more to reduce the infrastructure deficit of the Judiciary and complete the work of modernising the arm of government.

“We know that this will boost the morale of those working there and, by extension, help to produce better justice system for all,” Governor Makinde added.

In her remarks, the Acting Chief Judge, Hon. Justice Yerima said that every resource given and allotted to the judiciary will be judiciously utilised for the benefit of justice delivery and service to the good people of Oyo State.

She added that she would be counting on the support of the State Government in administering an effective justice system, stating that her vision is to make the Oyo State judiciary a pacesetter in the area of good infrastructure.

“I give glory to God for such a time as this, and appreciate the governor for this opportunity to serve our Pacesetter state in this capacity.

“It really behooves on me at this time to do my very best for the good of Oyo State. As I stated some months back when I led the team of the judiciary to defend our 2023 budget, every resource given and allotted to the judiciary will be judiciously utilised for the benefit of justice delivery and service to the good people of Oyo State.”