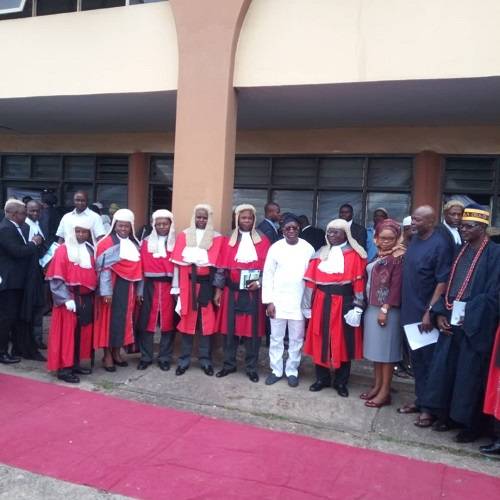 Posted at 11:34h in Featured News, Ministry of Justice, Ministry of Lands, Housing, Survey and Urban Development, Ministry Of Women Affairs And Social Inclusion, Office of the Head of Service by Oyo State ICT 0 Comments

Oyo State Governor, Engineer Seyi Makinde, said on Monday, that his administration remains committed to the actualisation of the Independence of the Judiciary.

The Governor, who was represented by his Deputy, Engr. Rauf Olaniyan, at the opening of the 2019/2020 Legal Year, stated that his administration would provide conducive atmosphere for the effective performance of the Judiciary in the state.

During his speech, Governor Makinde urged the judiciary to shun bias and delay in the discharge of their duties on dispensation of Justice, noting that Justice delayed is Justice denied.

A statement signed by the Special Assistant (Print Media) to Governor Makinde, Moses Alao, quoted the Governor as saying that his administration would back the Judiciary in the State to work effectively by providing everything it needed to perform optimally.

He said: “We are not going to allow the Judiciary to be coming cap in hands and be begging for their rights. Every effort will be made to make the dispensation of Justice easier in this regime.”

He also enjoined the Muslim Clerics to continue to pray for the Judiciary on the discharge of their duties, noting that prayer was needed to ensure effective dispensation of Justice.

Governor Makinde hinted that his administration would continue to interact with all other arms of Government in a very peaceful manner.

In their separate remarks, the Deputy Chairman, Nigerian Bar Association (Ibadan Branch), Mr.Ibrahim Lawal and the chairman, Muslim Lawyers Association of Nigeria, urged the Executive arm of Government to allow the independence of the Judiciary and provide necessary financial support for them always.

“We urge the Executive arm of Government not to pay lip service to the independence of the Judiciary.

“We reiterate our demand for the establishment of Shari’a Court in the Judiciary would be asked to give their stewardship on the day of Judgement.”