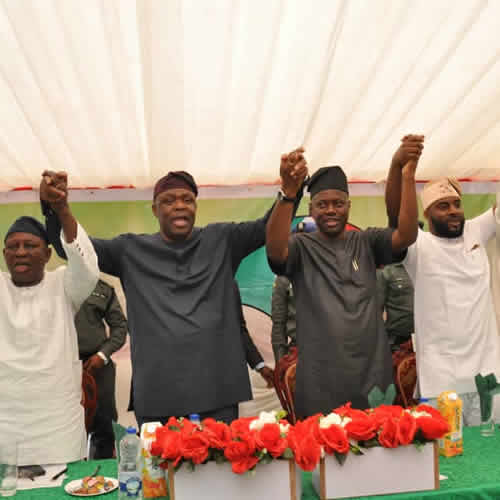 Posted at 21:54h in Featured News, Office Of The Secretary To The State Governor by Oyo State ICT 0 Comments

…calls for unity in S/West PDP

Oyo State Governor, Engineer Seyi Makinde has called on members of the Peoples Democratic Party (PDP) in the South West geopolitical zone to remain united and focused so as to enhance the fortunes of the party in the zone.

The Governor, who addressed a gathering of PDP leaders, who converged on the Government House, Ibadan, on Thursday, enjoined them to ensure that peace reigns in their States so as to engender a win-win situation for the party.

He also declared that his administration would put the quest for true federalism to full test during its tenure.

A statement by Governor Makinde’s Chief Press Secretary, Mr. Taiwo Adisa, confirmed that the Governor also offered to play his part in ensuring a united front for the PDP in the zone.

He said that all hands must be on deck to ensure that the PDP wins more laurels in the off season elections slated for Ondo, Ekiti and Osun States.

“Unity is the only way that can give us victory in any election without unity we can’t be victorious,” the Governor said.

He asked the State chapters of the PDP to learn from the experience of the party in Oyo State, adding they lost out to a party that won only 33 percent of the votes.

The Governor said the meeting was meant to discuss issues bothering on the party in all South West States and rub minds on ways to tackle the challenges collectively.

“After the election this will be the first opportunity for me to say thank you for your support, prayers through the electioneering process and election.

“We cannot do it alone. You called us and gave us advice that pointed us to certain directions that contributed to the success that actually delivered Oyo State for PDP.”

Governor Makinde also told the gathering that his government would test true federalism to its limits adding that the Government would ensure that what is due to the State is received.

He said: “We can only be strong and move fast as long as we can be united.”

The Governor equally pledged to carry all the PDP leaders in South West along in his administration so as to give them the sense of belonging.

He expressed dissatisfaction with the verdict of the Election petition tribunal, which adjudicated on the presidential election held on February 23, adding that he was in fully in support of the decision to escalate case to the Supreme Court.

The Governor, therefore, urged all the aggrieved party members to allow the peace and harmony to reign in the party so as to improve on the current fortunes in the State.

At the end of the meeting, the National Vice Chairman, Southwest, Dr. Eddy Olafeso presented the communique, which read:

“All PDP Southwest Members congratulate His Excellency, Engr Seyi Makinde, on his election and inauguration as Governor of Oyo State. We thank him for his leadership role in the Zone.

“It also further commended him for the giant strides he continues to take in the administration of the State. These deft moves confirm his determination and preparedness to drive the frontiers of development to new heights in Oyo State and set a new pace for other States to follow.

“Also, we are indeed proud of achievements recorded within his first 100 days in office.

“We also take serious view of the verdict of the Presidential Election Petitions Tribunal verdict on the petitions of our Party and candidate, His Excellency, Atiku Abubakar, GCON and therefore, put it on record our disappointment that justice was not done, in view of the plethora of evidences laid before it, and resolves to support the Party to appeal against same at the Supreme Court.

“Due attention is accorded to the verdicts of both the Court of Appeal and Supreme Court on the Osun State Governorship election, particularly its resolve to subject the electoral  desires and expression of the people of that State to the technicality of a judge missing just a day’s sitting at the Tribunal level.

“While we continue to accord due respect to the Judiciary, it is essential that its rulings and verdicts command the respect and confidence of the citizenry in the interest of the nation.

“That the Party must review the conduct of off-season elections in the South West, with a view to develop a response system that will forestall, arrest and vanquish all APC inspired rigging plans in future elections beginning with the very next gubernatorial elections in Ondo State.

“The Party takes serious notice of the students demonstration at Federal University of Science, Oye- Ekiti and the resultant killing of at least two students by the Police.

“We declare that it is callous and criminal of the Police to use live ammunitions on unarmed student demonstrators, therefore demand that the those irresponsible officers who killed them must be fished out for trial.

Chief Press Secretary to the Governor