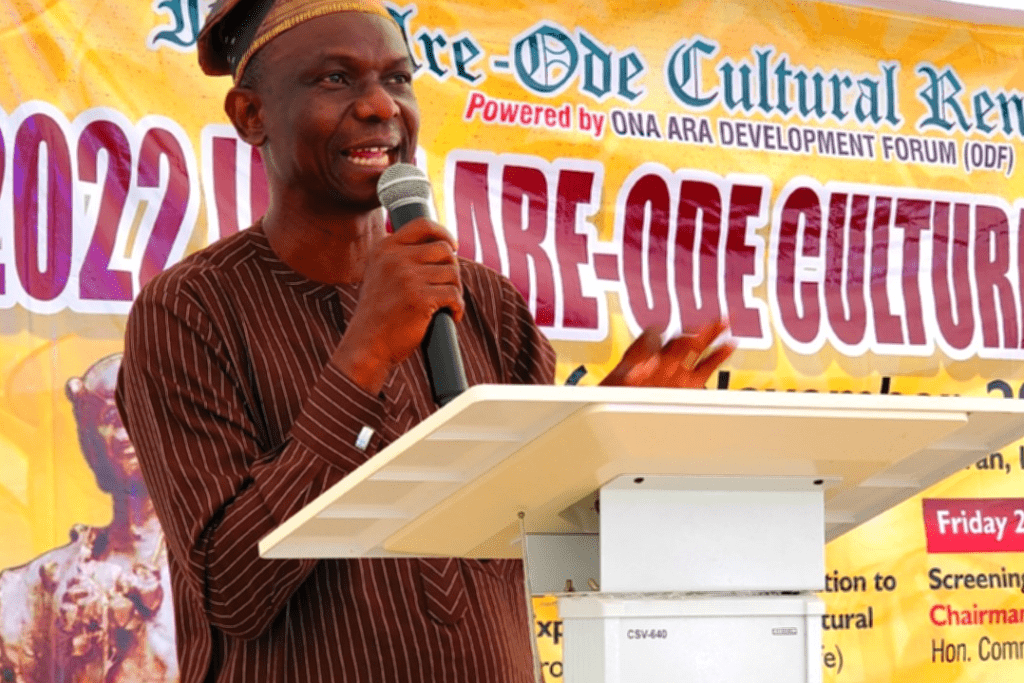 The Oyo State Commissioner for Information, Culture and Tourism, Dr. Wasiu Olatubosun, the Araba Awo of Osogbo, Chief Yemi Elebuibon, a Professor of Legal History, Prof. Akinkunmi Adegbola Alao, and other culture advocates have observed a need to constantly look into ways of harnessing the intellectual foundation of an indigenous genre of music, ‘Ijala’, in developing the society.

They made this observation at a lecture celebrating the 2022 Ijala Are-Ode Cultural Festival in Ibadan with the title ‘Ijala: Beyond Social Gyration to Intellectual Exposition of Yoruba Cultural Heritage’.

Dr. Olatubosun, who was represented by the Permanent Secretary of the Ministry, Mr. Oye Oyedele suggested that a home-grown method of teaching the coming generation Yoruba culture is the only way Yorubas can occupy their rightful place in the comity of nations.

He added that for the Yoruba race to conquer the world, they must appreciate who they are, learn the things of the race, and behave truly like Yorubas.

Olatubosun said Oyo State Government, under Governor Seyi Makinde has shown commitment to resuscitating the Yoruba culture and tradition among the younger generation, through a re-introduction of history classes to public schools in the State.

During his lecture, Prof. Akinkunmi Adegbola Alao said there is a need to go back to the basics, look beyond the social gyrations derived from Ijala by hunters, and find ways to deploy the intellectual foundation of Ijala in Yoruba cultural heritage.

The Scholar noted that although the immediate purpose of any traditional music performances is to entertain, the genre of music could influence a renaissance of Yoruba Culture and traditions.

He enjoined Africans, especially the Yorubas to embrace and leverage indigenous technology to develop human society.

“We need to go back to the basics. Go beyond just the gyrations of individuals, amusing themselves, to unearth the intellectual premise of this rich cultural tradition”, he said.

Speaking on what led to the celebration of Ijala by hunters in those days, Alao noted that the neglect by the political class, gave room for chanting Ijala by the hunters to celebrate their contributions to the society.

Alao who applauded the efforts of hunters in maintaining peace within the boundaries of their society, admonished the Political class to forthwith stop diminishing their importance.

“The nature of their profession takes them away from domestic politics. They are always engaged in warfare and deep forest hunting and so many other activities outside the immediate precinct of the established kingdoms. So many times, they are not on ground to take part in the political process, so the political class diminished their importance”, he observed.

“But they resorted to Ijala to celebrate themselves, to call attention to their importance and to let people know they have contributed a lot to the development of the society”, he continued.

Prof. Alao who chided the Political class for refusing to recognise the little efforts of hunters, commended the Oyo State Government for partnering Ona-ara Development Forum in celebrating the Ijala are-ode cultural Renaissance.

“Rather than denouncing our hunters, we must encourage them to positively use their knowledge towards the development of human society,” he noted.

Alao noted that the festival will open doors of opportunities to hunters, showcasing talents and importance of the hunters’ guild.

He further projected that in the next five years, the festival would have been internationalized.

Prof. Alao also opined that in the coming years the Organisers would call attention of the world to the intellectual precinct of Ijala, hoping that the guild would have assumed new relevance in the Yoruba society by then.

Also speaking at the event, the Araba Awo of Osogbo, Chief Yemi Elebuibon urged Africans to develop their culture, observing that it is a must to “first appreciate who they are and what they are”.

Chief Elebuibon also warned the Yorubas against jettisoning Ifa science and technology, adding that if care is not taken, in no distant future, people of the Yoruba tribe will soon be paying the Europeans for Ifa divination.

He also revealed that the forefathers of all Ona-Ara indigenes were hunters and warriors, who played pivotal roles in the ‘Agbekoya war’.

He said Ijala is an expository of intellectual content, which spells history, family lineage.

“Ijala explores and exposes the inadequacies of our leaders, promotes social relations and is rich with powerful of words”, he said.