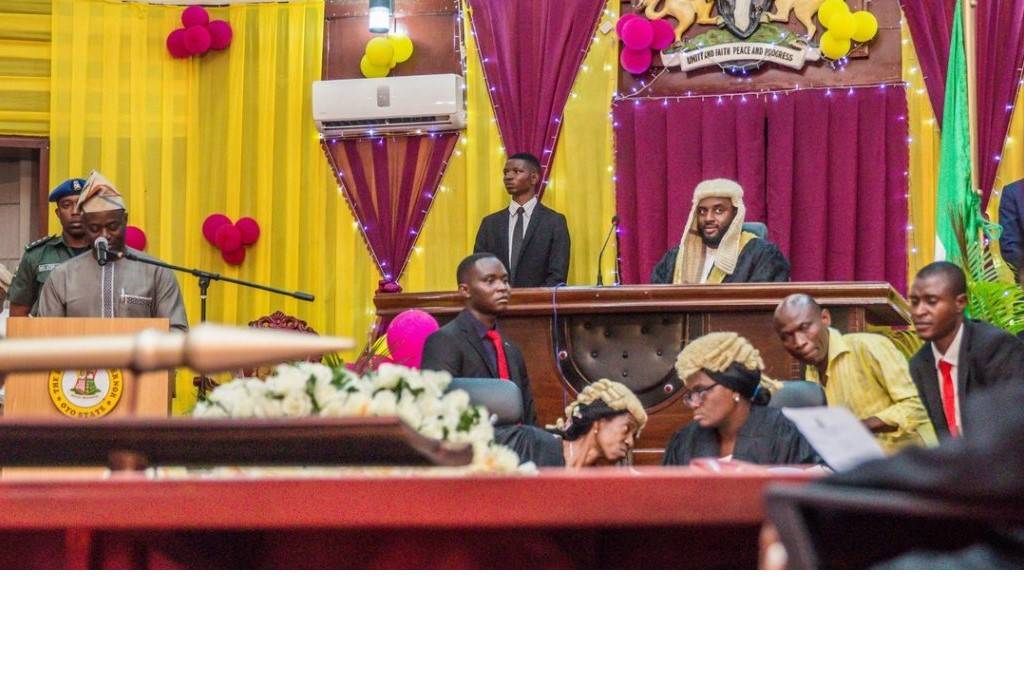 …as gov delivers State of the State address

Members of the Oyo State House of Assembly, on Thursday, passed a vote of confidence in Governor ‘Seyi Makinde, as the Governor delivered the annual State of the State address before the special plenary sitting of the lawmakers.

The motion for a vote of confidence was raised by the Majority Leader, Honourable Sanjo Adedoyin, representing Ogbomoso South and seconded by the Deputy Speaker, Honourable Mohammed Abiodun Fadeyi.

A statement by the Chief Press Secretary to the Governor, Mr. Taiwo Adisa, quoted the Governor as saying that his administration has been engineering a modern Oyo State, adding that the Government has been getting the results of good Governance.

He said: “It is a privilege to be with you honourable members on this second anniversary of the Oyo State Ninth Assembly.

“I want to especially thank you for the opportunity to share with you and the good people of Oyo State, a report of our activities in the past year in this State of the State Address.

“Mr. Speaker Sir, time will fail me if I list all the infrastructural projects that we have embarked on in the past year. It is no joke when we say our administration is engineering a modern Oyo State.”

He stated that the administration has not deviated from its policy document entitled Roadmap for the Accelerated Development of Oyo State, 2019-2023, maintaining that it has continued to focus solidly on the four pillars of security, health, education and economic expansion through agribusiness.

Governor Makinde, who pledged that the administration will continue to prioritise the security of the people, reiterated that his Government would work hard to prevent the recurrence of the sad event that occurred in Igangan.

The Governor mentioned the operationalisation of the Western Nigeria Security Network codenamed Amotekun, the recruitment and passing out parade of 1,500 corps members and their subsequent deployment to all 33 Local Government areas of Oyo State as part of the administration’s achievements in the security sector.

He said that the Government also set up a Security Task Force, which meets weekly to assess security threats and proffer solutions that would work for the State.

The Governor added that the Government has also strengthened the security architecture by expanding the operations of the Security Control Room and City Watch facilities at the Oyo State Security Trust Fund Headquarters, while it has also supported Federal security operatives by providing operational vehicles, communication gadgets, bullet-proof vests and other security equipment to facilitate their work.

According to the Governor, his administration’s focus on placing the economy first, has been attracting the best results of good governance in the State, saying that the Government has succeeded in increasing the State’s revenues by expanding its tax base.

He noted that the Government successfully cut down the running cost of Government by 50 per cent and the Government overhead cost by over 12 per cent, adding that it has also grown the State’s Internally Generated Revenue by about 1 billion Naira each month.

“We have invested these monies wisely in infrastructure development, especially in the construction of roads. I am happy to report that we have completed and commissioned the 65km Moniya-Ijaiye-Iseyin Road. Our people can now travel from Ibadan to Iseyin in a fraction of the time that they used to.

“The Challenge-Felele junction is now wearing a new look. The junction improvements we did there have brought succour to the road users who used to waste valuable time in traffic.

“We handed over the newly reconstructed and upgraded Akesan Market to the traders. The facility now hosts 528 lock-up shops, 163 open shops, 3 warehouses, 1 cold room, a police post, an administrative block, a clinic, 2 toilet blocks (male and female), 2 car parks (one inside and the other outside) and 4 fire hydrants at each complex and industrial boreholes.

“The 21km Airport-Ajia-New Ife Express Road with a spur to Amuloko is about 60 per cent complete. That road will open up new economic potentials in that axis.

“We are reconstructing the 12km Apete-Awotan-Akufo Road. That project is due to be completed by the last quarter of this year, 2021. These are just a few of the major road projects we have embarked on in the past year. We are building bridges, physical and metaphorical, ensuring that our people are linked by economic and social development.

“For example, the 65m General Gas Flyover connects Akobo to Idi-Ape to Odogbo Barracks. It will be completed in the last quarter of this year. Whereas the metaphorical bridges we are building are already making the people of Oyo State think differently.

“No zone in Oyo State is left behind, no sector is being overlooked, no group is being underserved. We feel a renewed sense of pride when we sing the words of our Oyo State anthem, “Asiwaju niwa, asiwaju niwa,” the Governor said.

Governor Makinde equally mentioned the sole ownership of the Ladoke Akintola University of Technology (LAUTECH), Ogbomoso, reduction of the institution’s fees by 25 per cent and the completion of over 300 projects, including the construction of 26 model schools, 57 classrooms and office blocks, renovation of buildings in over 70 primary and secondary schools across the State and more.

He added that the administration has also been resuscitating moribund industries such as the Agbowo Shopping Complex, Ibadan, the Pacesetter Asphalt Plant and Quarry, Ijaiye, the Cassava Processing Factory, Ilaju.

He said the recent commissioning of the reconstructed Oyo State Agribusiness Development Agency (OYSADA) Headquarters, Saki, are the other gains the administration has recorded, noting that the proposed Akufo and Eruwa Farm Settlements, which the Government proposed to convert into farm estates have now been contracted for conversion into agribusiness industrial hubs.

He maintained that the recently flagged-off Fasola Agribusiness Industrial Hub will be completed within a year.

In the health sector, the Governor stated that contracts for the renovation and upgrade of 299 Primary Healthcare Centres (PHC) had been awarded across Oyo State and that in the shortest possible time, each of the 351 wards in Oyo State will have a standard and functioning PHC.

The Governor, who also used the occasion to commend the State’s contingent to the last National Sports Festival – Edo 2020 – where Oyo State placed 6th overall, said the Government embarked on massive reconstruction and upgrades of sporting facilities in all five zones of Oyo State.

“May the cooperation and togetherness that we have enjoyed so far continue to abide with us until we complete our tenure,” he added.