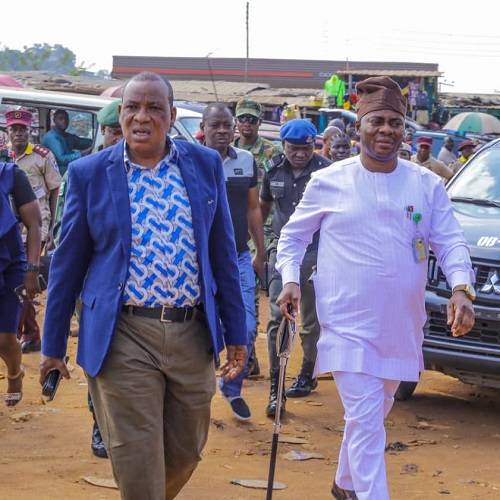 Oyo State Government in its bid to actualize the promise of freeing traffic gridlock and put a stop to unnecessary life loss to accidents at the Ojoo Interchange in Ibadan has begun evacuation of traders and motorists at the Interchange to the provided space at Abatakan Motor Park, behind Total Filling Station at Ojoo, Akinyele Local Government.

Recall that the State Government, through the Ministry of Lands, Housing and Urban Development had recently given a three-day ultimatum to motorists and traders using the Ojoo Interchange to pick passengers and ply their trades to relocate to the permanent space provided by the Government.

While enforcing the relocation on Thursday, the Chairman, Oyo State Road Transport Maintenance Agency (OYRTMA), Mogaji Akin Fagbemi alongside the State Commissioner for Lands, Housing and Urban Development, Barrister Abiodun Abd-Raheem called on the people affected to see the Government gesture as an intervention to safe lives and properties and not to make life difficult for them.

“This enforcement is part of the reason people voted for good Governance, no reasonable Government will sit back and watch people being killed by things they can easily control, Government took a decision to construct this Interchange to forestall accidents that used to happen here daily then, it is wrong for us to now start using the same place to peddle their wares and pick passengers.

“The place created for them to be used is not far from here and we are happy that most of the traders and motorists are already complying, they have moved there, for those that will want to contravene, our officers will work alongside security personnel to apprehend and prosecute them according to the law,” said the Commissioner for Lands, Housing and Urban Development.