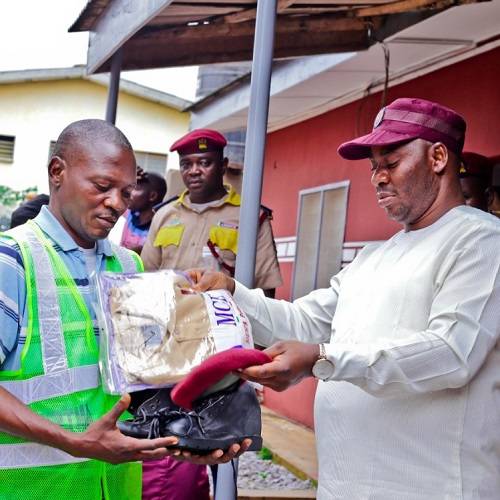 Oyo State Government has commissioned a number of men and women in the State known as OYRTMA Mayors for voluntary service towards easing traffic congestion and make the public roads free.

The Executive Chairman, Oyo State Road Transport Management Agency (OYRTMA), Dr. Akin Fagbemi disclosed this on Thursday in Ibadan while distributing operational kits to OYRTMA Mayors temporarily deployed across the State to complement the efforts of officers and men of the agency.

“This is another angle to the novel developmental plans of the present administration in our State. The OYRTMA Mayors are volunteers that will be complimenting the efforts of our officers in the State capital and at all the 33 Local Government areas.

“The concept is to free our roads of all traffic entanglements and difficulties and as we all know the capacity of the number of officers we have cannot cover the stretch of the State as a whole and we will make do with the volunteers till government will have the financial capacity to employ more.

“The operational kits and other gadgets will help identify these set of volunteers and we are confident that they have been given enough training on good conduct and how best to relate with motorists,” he assured.

Distributing the items which included high quality crested vests, berets, jungle boot, reflective jackets as well as Operational Trousers, Dr. Fagbemi charged the Mayors to discharge their duties diligently, adding that outstanding ones among them would be adequately rewarded.

The Mayors were primarily saddled with the responsibility of monitoring, controlling and directing traffic along Secondary and basic Schools across the State in a bid to bringing to an end to road accidents involving school pupils, an intervention Fagbemi said was in order to complement the free and compulsory education policy of the present administration.