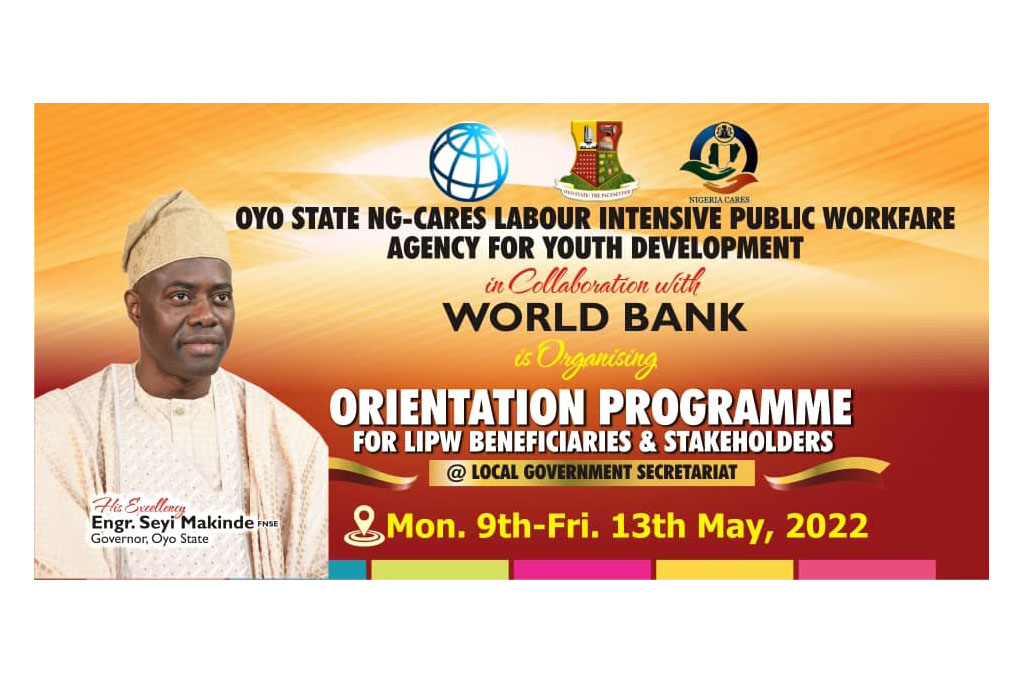 The first batch of the Oyo State Labour Intensive Public Workfare Beneficiaries (OYS-CARES LIPW) under the NIGERIA CARES operation selected from eighteen Local Government areas of the State have been deployed to their different communities to carry out public works activities.

The youths, who have started working since May 2022, will be paid a monthly stipend of ten thousand naira for four hours per day and twenty days per month works in the areas of grass cutting, filling of potholes, clearing of drainages, sweeping of dirty environment, collection and disposal of refuse as well as traffic control at major public institutions like community halls, hospitals, courts among others.

Others, according to him, are Ogo-Oluwa, Olorunsogo, Oluyole, Oriire, Saki East and Surulere Local Government areas, where the Local Government Community Development Officer will keep up the daily monitoring of the beneficiaries at their respective duty posts.

The programme was designed to ameliorate the effects of the Covid-19 on the economy and the people, as many businesses were adversely affected by the pandemic, which led to loss of jobs and earnings by young Nigerians.

Sangogade hinted that the Oyo State Government bought into the idea to further empower the youths to contribute to the development of their communities while being paid a stipend to show appreciation for their efforts monthly.

“This effort is another area where the State Government, through the Federal Government and the World Bank, has co-opted the youths who might have been idle at these communities and the beneficiaries will contribute towards maintaining a hygienic environment while ensuring traffic sanity, especially in the major metropolis.

“The office has a system of monitoring the beneficiaries so that they will do their expected rounds daily within the specified time as apart from the routine monitoring by our office from Ibadan, each Local Government Community Development Officer is also saddled with the responsibility of going round these beats to monitor beneficiaries doing their public works.”

He added that other Local Governments areas that were yet to benefit from the programme would soon get the same opportunity as soon as funds are available for selection of beneficiaries and their deployment.