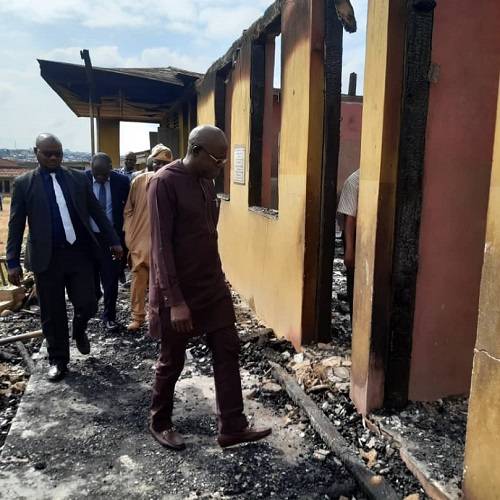 Oyo State Government has vowed to bring to book, the perpetrators of an inferno which razed a block of three classrooms at Cannon Okusehinde Memorial Primary School, School I, Aremo, Ibadan.

The Executive Chairman, Oyo State Universal Basic Education Board, Dr. Nureni Aderemi Adeniran made this known on Wednesday when he visited the school to assess the level of destruction caused by the arsonists.

Frowning at the masterminds of the inferno, Adeniran promised that the State Government would investigate the act of arson and fish out all culprits involved, adding that anyone found culpable would face the wrath of the law.

“Oyo State Government will ensure that this particular incident of arson is investigated, and the offenders punished under the law.”The present administration will not tolerate or condone any form of vandalism or sabotage, especially on our public schools “, he continued.

“We will use them as example for others to learn that arson is very serious an offense, especially when the public school that represents liberation from all forms of backwardness is concerned.”

Dr. Adeniran also promised that Government would put in place viable security measures and ensure it puts an end to the growing instance of arson, vandalism and destruction of school facilities in the State.

The Executive Chairman further promised renovation of the burnt classes in the next FGN-UBEC/OYOSUBEB intervention projects.

He also approved with immediate merging of pupils of the burnt classes with their colleagues in School 2, noting that nothing should stall the learning process of these young ones.

Speaking earlier, the Head Teacher, Cannon Okusehinde Memorial School, Aremo, School I, Mrs. Sherifat Salam described the inferno as the height of vandalism on the school.

She told to the Executive Chairman that hoodlums have incessantly burgled the school over the past weeks.