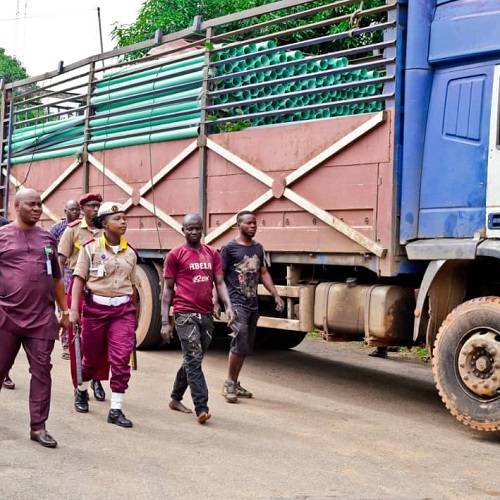 The management of Oyo State Road Transport Management Agency (OYTRMA) has warned all commercial motorists to desist from using major roads as motor parks to avoid unnecessary loss of lives to accidents and incessant traffic gridlocks.

The warning was issued as OYRTMA officers, led by the State Commander, Ayoade Adeoye, on Wednesday visited the Iwo Road interchange to clear the road off commercial vehicles using the roads as illegal parks.

While speaking to the leadership of the parks, Adeoye urged them to direct their commercial drivers to stick to their designated motor-parks as any vehicle apprehended for illegal parking would be made to face the full wrath of the law, adding that intra-state drivers who did not have designated motor parks should approach the agency, so it can be addressed.

Traders within the Iwo Road interchange were also asked to relocate their goods to the appropriate market area as the Commander said their activities was risky, due to the nature of the Lagos-Ibadan expressway.

Speaking to newsmen during the exercise, the commander said their operation at the interchange was to ensure continuous free flow of traffic within the area.

Adeoye said the motorists have been instructed to make use of the modern garage at Temidire, New Ife Road, at Ibadan, built by the State Government for their convenience.

“Here at the Iwo road interchange, there is always gridlock both in the morning and at night. The Govt. of the day is very much interested in the welfare of the citizens and has declared that all activities around the interchange should be relocated to the necessary places.

“Look at the illegal parks, they constitute risk to the lives of the commuters and even drivers themselves as vehicles on high speed may lose control and veered to their side, Government has spent a lot to build a modern garage at Temidire Wema side but these transporters do not want to go there for reasons best known to them.

The agency recently impounded about fifty trailers along the Iwo-Road interchange for contributing to the traffic gridlock and accidents along the highway.