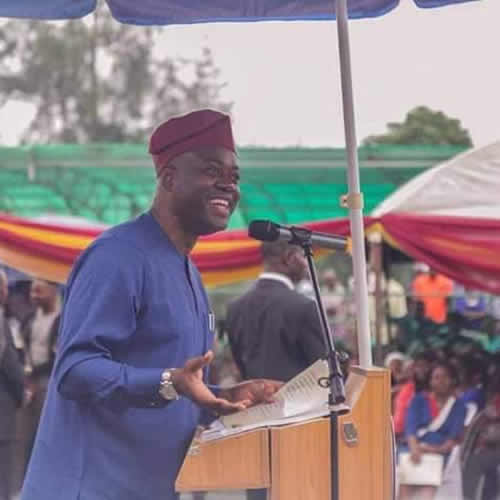 Posted at 22:50h in Featured News, Office of the Head of Service, Office Of The Secretary To The State Governor by Oyo State ICT 0 Comments

…increases car, housing loans for workers. …..’why I am concerned about workers welfare’

Oyo State Governor, Engineer Seyi Makinde, on Wednesday, revealed that the wage bill of workers in the State increased by N1 billion, shortly after the Governorship Election of March 9, 2019.

The Governor, who made the disclosure during an interactive session with workers in the employ of the State Government, held at the State Secretariat, Agodi, Ibadan, said that the development shot up the wage bill to about N5.2 billion from March 10.

A statement from the Governor’s Chief Press Secretary, Mr. Taiwo Adisa, also confirmed the increment of car and housing loans to workers as approved by the Governor.

According to the statement, Governor Makinde increased the car loan to Civil Servants from N500,000 to N750,000 and the housing loan from N2 million to N3 million in order to assist the Civil Servants in the State.

The Head of Service, Mrs. Amidat Agboola, had in her speech at the session, disclosed that the Governor had approved a monthly grant of N20 million for car loan for the State workers; N15 million as car loan for Teaching Service Commission staffers and N20 million for housing loan to ensure that more civil servants benefit from the schemes.

“Between March 10 when we were declared the winner of the election and May 29 when we eventually got into office, the salary bill of Oyo State increased by N1billion but we paid it and some questions are being asked. We promised oneness and, for us, that is the path we are going to continue to tread on,” Governor Makinde said.

He, however, maintained that despite the N1 billion increase, his Government had been paying the wage bill.

The Governor further declared that the Government would embark on a verification of workers in the State to ensure that the payroll is not suspicious.

Governor Makinde stated that his administration remained committed to the welfare of workers in the State because as a son of former civil servants, he was fully aware that workers need the support and assistance of the State Government to do good things.

He also called for the cooperation and involvement of workers to carry out the verification within the shortest period of time in order to free up some funds that can make the Government execute some of the things workers were asking for such as training and retraining.

He said: “The not-so-good news, which will be good in the end is that, we have to carry out a verification exercise. This is not to witch-hunt anybody but to convince ourselves that we don’t have fraud in our payroll system. If we are able to save money through that exercise, we can also utilise growth to take care of the welfare of the workers and use the rest for the generality of the people of Oyo State.

“So, I want to solicit for your cooperation, involvement and support to carry this out within the shortest period of time. This exercise will free us some money that can make us do some of the things you are asking for; by training, both local and foreign. So, I am assuming I will have your support concerning the issue of the payroll.”

He added: “The federal allocation is a little short of N5billion naira but the salary is N5.1 to N5.2billion naira for the state workers in Oyo State. For the local government teachers and others, it is about N3billion naira. On a monthly basis, we have to look for N8billion naira to make payment for the salaries.

“Also, the good news since when we came in is, we have not embarked on any serious capital project at the local level because there is still turn-in to sort out that level of governance. With the extra N2b we get on a monthly basis, we must have accumulated N8billion naira sitting in the Local Government account.

“The internally generated revenue IGR is about N2billion naira. We do take from the IGR to augment salaries. Of course, we have to do things for the generality of the people of Oyo State. We have to carry all the capital projects. We also have to do things that will expand our economy to make our IGR go on,” Governor Makinde said.

He, therefore, urged the civil servants to be open to challenges and to move in the same direction with his Government, saying that “though we have made little progress, we are not satisfied. For us, those are marginal but if we all can work together we can really make giant progress. The political office holders cannot do it alone. If we have your support, we can together to achieve the desired result.”

He also warned those seeking to divide the people of the State along religious lines, saying: “Governance for us is beyond politics or religion. Nobody under my watch will be discriminated against because of political leaning or religion. So, those who want to divide us with political or religion sentiment should find another work to do.”

Welcoming the workers to the venue, the Secretary to the State Governments (SSG), Mrs. Olubamiwo Adeosun, thanked the workers for their cooperation with the administration so far, adding, however, that they should do more.

Earlier in her speech, the Head of Service told an ecstatic crowd of workers that Governor Makinde increased the car loan to civil servants from N500,000 to N750,000 and the housing loan from N2 million to N3 million in order to assist the civil servants in the State.

She charged the workers to be more committed to their duties and shun any activity that could tarnish the image of the service and their families in general.

“This is the time for us to be rededicated to our duties. Truancy, lateness to work, disloyalty to the Government, embezzlement, hobnobbing and other improper conducts would not be condoned and anyone found culpable of such acts should be ready to face the wrath of the law,” Agboola said.

Titilola-Sodo, who made reference to the prompt payment of salaries and pensions on or before 25th of every month, however, called on the Governor to consider the filling of vacancies in ministries and agencies, fulfill his campaign promises on training and retraining and resolve pending matters on transfers and conversion of workers in the State.

Governor Makinde had, while responding to demands from the Nigeria Labour Congress (NLC) chairman, Mr. Bayo Titilola-Sodo and civil servants in the State, said that his Government would remain open to workers in the State, noting that a dedicated phone line would be given to workers to interact with him 24/7.

Chief Press Secretary to the Governor.