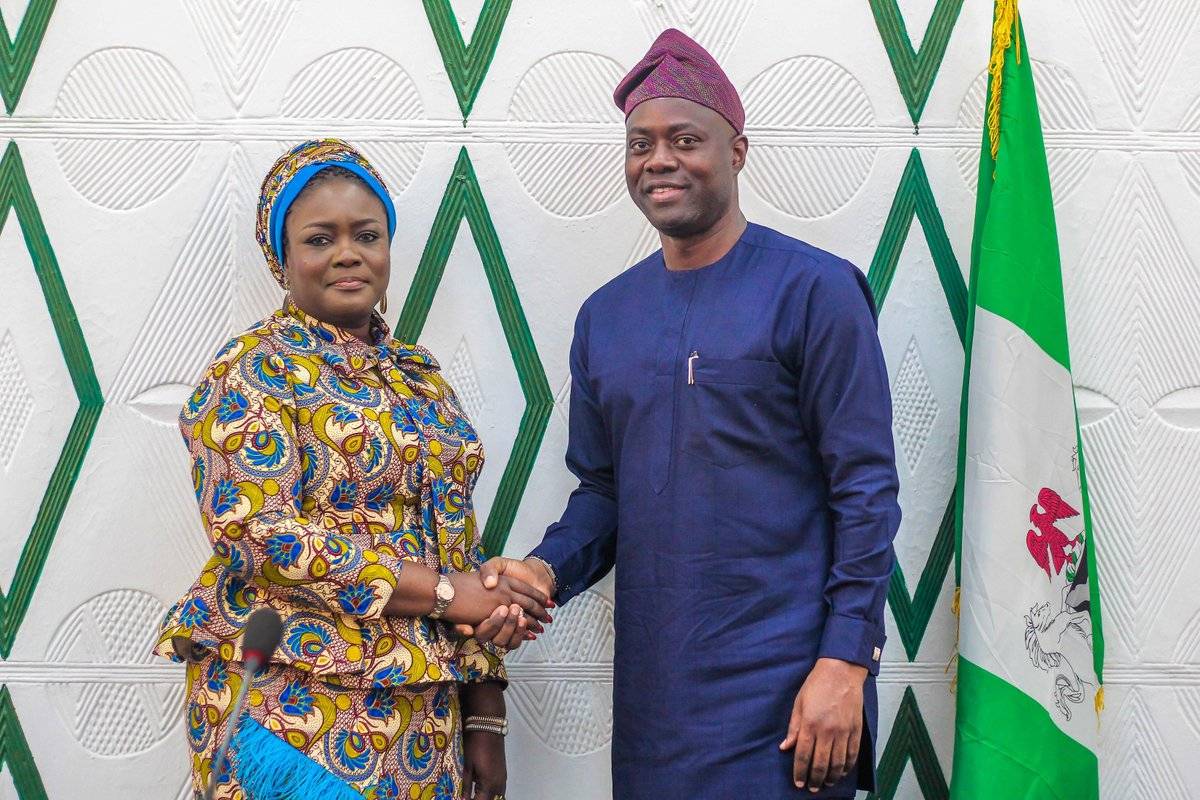 01 Jul 2019 Swearing-In of the Secretary To The State Government, Mrs. Olubamiwo Adeosun

SPEECH BY HIS EXCELLENCY GOVERNOR SEYI MAKINDE ON THE OCCASION OF THE SWEARING-IN OF THE SECRETARY TO THE STATE GOVERNMENT, MRS. OLUBAMIWO ADEOSUN, MONDAY, JULY 1, 2019.

It is with great pleasure I welcome all of you to this gathering today, as we take one of the key steps towards the full swing implementation of the service agenda of our administration.

Today, I am inaugurating Mrs. Olubamiwo Adeosun, a “daughter  of the soil” if I may use that word, as the first female SSG of this state.

In taking the decision to pick her out of the very eminently qualified personalities I had before me, I did a lot of introspection. There is this usual divide between politicians and technocrats.

Some people would argue that the best person for the job is a politician, who understands the terrain as they put it. Others would say the engine room of government must be manned by a technocrat, who knows his or her onions.

But I must state that we need a focused government which will deliver on its terms. We need capacity and lots of efficiencies and we need a packed personality who in a way encapsulates all of that.

I must tell you that a number of questions agitated my mind as I moved to take the final decision. How do we marry all the qualities needed in one person? How do we satisfy all the contending interests?  These are concerns that must be answered and when I finally zeroed in on Mrs. Adeosun, I need not think twice to conclude that we have made the right choice.

In arriving at the choice of Mrs. Adeosun, we have picked a person, whose wealth of experience would lift the standard of our service delivery and performance.

The essence of governance is service to the people, and I have no doubt that the new SSG will propel this government to expected cruising level such that the achievements we will be rolling out within the first 100 days would more than dwarf the meager returns some of the past governments recorded even in eight years.

Her profile speaks for her. She has been a well-trained Pharmacist with capacities in different sectors of human and personnel development. She has worked in our Nigerian terrain and abroad. She has a world view that would easily afford her the opportunity to make the difference on the job.

I am certain that her inclusion as a key factor in our service agenda is one decision that would bring great returns on investment.

I know that a number of questions had been agitating the minds of many since her name was announced. The politicians among us would say, why not a politician. Others would say technocrats abound even within the campaign team.

Let me say that her appointment does not amount to shutting the door on our supporters. Only one person can occupy a seat such as that of the Governor or the SSG at a time. I assure you that we will ensure we deploy the capabilities of every individual in their areas of strength and as appropriate.

One thing I need to state very clearly is that in appointing Mrs. Adeosun, we are not appointing her based on sentiments of feminism or other undue sentiments. We are not just tapping to her qualities but also making a statement to our people out there: educate your wards whether boy or girl. There is no limit to the level an educated person can rise to.

I also say to our children, particularly the girls, to remain dedicated to their studies and shun all the limiting devices of chauvinism around them. The sky would be their beginning.

We cannot, however, shy away from stating that with her appointment, this government has again showcased its commitment towards ensuring gender and religious balance in the polity.

I have stated it clearly, we will not discriminate against anyone and we mean just that. Her appointment, coupled with the fact that the State Head of Service, the DG Due Process office and the Clerk of the State House of Assembly are all women already signposts this administration as women friendly. We do not intend to deviate from that.

Let me however challenge our women to continue to live up to expectations because the men are lurking by the corners.

As I welcome her to the government, let me wish Mrs, Adeosun the best on this new post.

God bless you all.