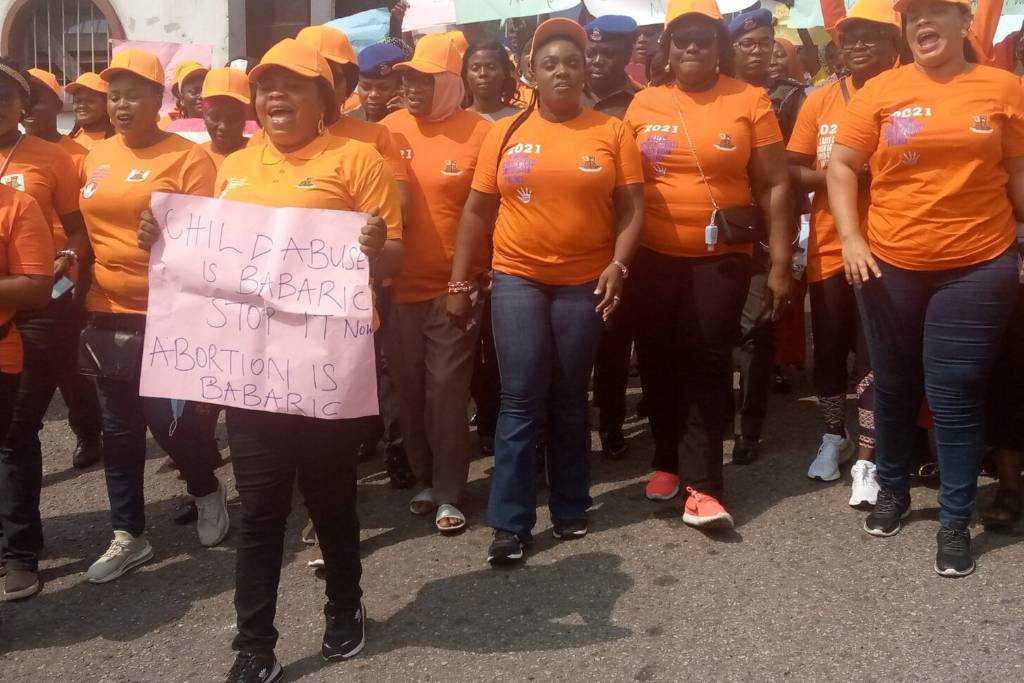 Wife of Oyo State Governor, Mrs. Tamunominini Makinde, on Tuesday led female top government functionaries, female political appointees and wives of chairmen of local government councils in the state on a walk to call for a stop to all forms of violence against women and girls in the state.

The women moved from the Government House and marched through the road which leads to the State Secretariat carrying placards and singing solidarity songs to show their displeasure for all forms of violence towards women and girl-child and chanting “Oyo State says no to gender based violence.”

The marchers were armed with banners and placards with various inscriptions decrying rape, defilement of minor, child trafficking and other forms of gender based violence.

Addressing journalists after the walk, Makinde urged women to always speak up against any act of sexual abuse or violence perpetrated against them.

She said the poor economic condition caused by the effect of COVID-19 pandemic was not a justifiable reason for any man to beat his wife, saying women should not cover up such abuse against them.

She said perpetrators of gender based violence had continued because they knew their wicked acts would not be exposed and if that did not happen , they would not be punished by the law.

She said her office, has continued to engage in series of empowerment and skills acquisition for women with the aim of helping them augment and support their husbands in meeting family needs.

Mrs. Makinde said, “Don’t leave the minors unattended. There are signs of abuses in victims to watch out for, and we must watch out for these in the minors.

“Mothers should not keep quiet. If you see something, say something. Our girls should not be subjected to child labour, sex or physical abuse.

“Oyo State Government has supported some victims. We will protect your identity if you report any abuse to us.

“Some people lost their jobs as a result of COVID-19 and they have become frustrated because they think of how to provide for their families. However, that is not an excuse to lay your hand on your wife.

“Economic hardship is no enough excuse for men to beat their wives. We were aware of the hardship caused by the general economy and situation occasioned by Covid-19 pandemic and we have engaged in various empowerment efforts for our women.

“The Government will continue to work and support our women and the girl-child to ensure that they are not abuse. We will also not look away from protecting our boy-child as they too could suffer some forms of abuse.