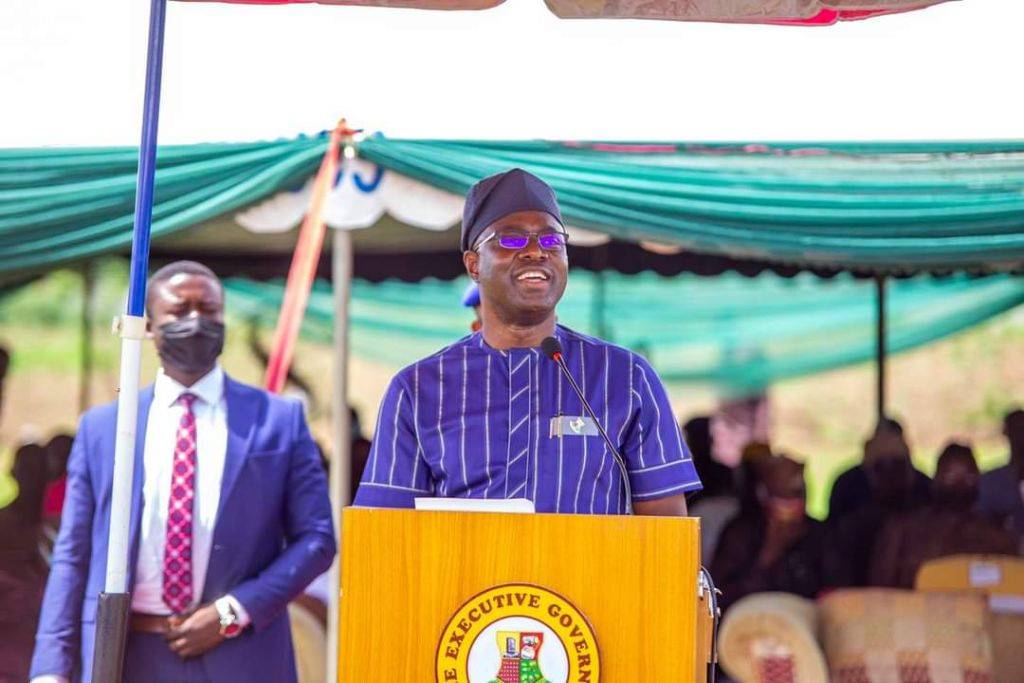 02 Jun 2021 We will do more to end insecurity, Makinde assures Ibarapa residents at town hall meeting

Oyo State Governor, ‘Seyi Makinde, on Wednesday, declared that his administration will do more to end insecurity in Ibarapaland and other areas of the State.

The Governor added that insecurity in Ibarapaland has been the most challenging and that his Government has put in place several measures, including the creation of a Base for Operation Burst in the area and deployment of more Amotekun corps, among others.

He said that these measures have yielded positive results in the last few months.

The Governor, however, added that with the uncensored feedbacks he heard from the residents of the area, who spoke freely during the Ibarapa Town Hall Meeting, held at the Eruwa Town Hall, Eruwa, as part of activities marking the second anniversary of the Government, it will do more to address the security challenges.

The Governor also promised to return to Eruwa in two weeks to flag off the construction of Isaba-Ogundoyin Road, adding that he will give immediate directive that the Operation Zero Potholes intervention should be carried out on the Igboora road and the Eruwa-Lanlate-Maya road.

A statement by the Chief Press Secretary to the Governor, Mr. Taiwo Adisa, quoted Makinde as saying that in order to tackle the security challenge, the Government is about to recruit more Amotekun corps, adding that it would also take a decision on what to do with the uncompleted 60-bed health facility in Igangan, which has become a hideout for criminals.

The launching of the CARES programme was held at the Oyo State College of Agriculture and Technology, Igboora, where the Governor also pledged to ensure that the school accesses at least 70 per cent of its capital vote in the 2021 budget so it could address the infrastructure deficit within the institution.

The Governor equally inspected the Igboora General Hospital Annex rehabilitated and upgraded by the Government in the wake of the COVID-19 pandemic.

While speaking at the launching of the Oyo CARES programme, Governor Makinde maintained that the State had carried out a similar support programme at the height of the COVID-19 pandemic last year, when it gave palliatives to 10,000 farmers to ensure food security in the State.

Similarly, the Oyo State Commissioner for Agriculture, Hon. Ojemuyiwa Ojekunle, stated that the Makinde administration has undertaken several interventions in the agriculture sector, such as STEP, YEAP and others, for the expansion of the State’s economy and eradication of hunger.

He said that the Oyo CARES programme would ensure that small-holder farmers are able to create wealth.

The Director-General of the Oyo State Agribusiness Development Agency (OYSADA), Dr. Debo Akande, appreciated the Governor for touching every area that needed to be touched as far as agriculture development is concerned.

He noted that the Government has implemented the Start Them Early Project (STEP) to encourage students in agribusiness, and launched the Youths Entrepreneurship in Agribusiness Programme (YEAP) to target the youth sector.

Akande said that with CARES, a programme that is akin to the State’s farmers’ support programme started in 2020, the Governor is reaching out to small-holder farmers, a development which, according to him, has put paid to apprehensions that the Makinde administration would only focus on the private sector in its drive to expand the State’s economy through Agribusiness.

At the Town Hall meeting, representatives of traditional rulers, communities, religious bodies, artisanal groups, traders and students spoke on issues affecting them, bordering on insecurity, trading and agriculture support, accreditation of courses in higher institutions in Ibarapa zone, among others.

In his response, Governor Makinde expressed pleasure at being able to listen to people without hindrance, appreciating them for the support for his Government in the last two years.

He said: “The issue of insecurity brought me here the last time and I remember that I made a comment that we needed to tackle those challenges because it is the only way it can affect our economic prosperity. Farmers in Ibarapa could not freely go to their farms because cows are invading their farms.

“It is a problem that has been existing even before we came into Government, and one of the promises I made then was to tackle security challenges. And the question to take home is – can anybody here imagine Oyo State without Amotekun? It is one of the initiatives we brought forward. Before we came, there was nothing like that. Yes, there may still be few areas we need to improve on but we all should work together with Amotekun.

“Well, since the last time we came here and now, we have taken various steps to ensure that the people of Ibarapaland and, indeed, the whole of Oyo State sleep with their two eyes closed.

“Ibarapaland is the most challenging zone as far as security is concerned. Since the last time I came here and now, there has been relative progress but we will do more. We will strengthen security. Between the last time I came and now, we have set up Operation Burst base and we are in the process of recruiting more Amotekun personnel.

“But I want to appeal to you not to leave the Government alone to face the issue of insecurity, as we all need to join hands to make things work. That is the only way; we have to keep moving together, because the Government alone cannot do it. We expect you to work with us and the security agencies.”

Speaking on the planned upgrading of Eruwa Farm Settlement to a Farm Estate/Agribusiness Hub, the Governor said the processes for the kick-off of the project will be fast-tracked, because the farm estate project has been identified as being capable of taking countless youths off the streets.

The Governor equally promised to engage with the Eruwa community on the issue of the Eruwa Cashew Plantation, which the State Government recently advertised and got a bid for its operation before some individuals tried to block the process citing community interest.