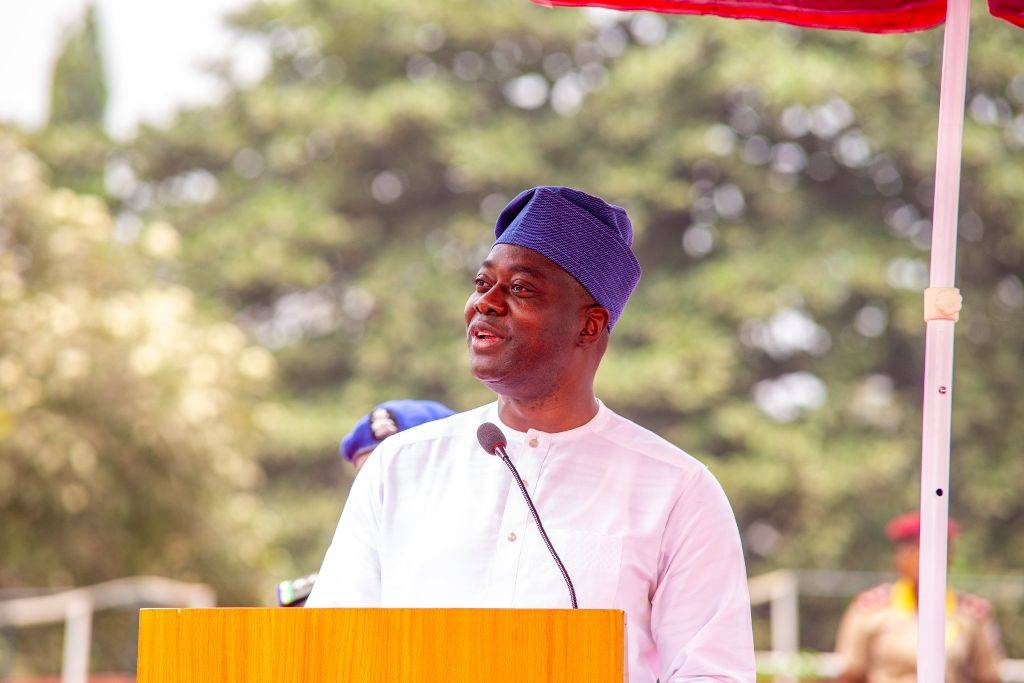 22 Apr 2021 We will host hitch-free NBA-SPIDEL Conference in May, Makinde tells NBA delegation

…says govt will remain sensitive to yearnings of the people

…charges NBA to back push for fiscal federalism

Oyo State Governor, ‘Seyi Makinde, has promised to provide suitable environment to enable the Nigerian Bar Association’s Section on Public Interest and Development Law (NBA-SPIDEL) hold a hitch-free Conference in Ibadan, the State capital, in May 2021.

The Governor, who stated this while receiving a delegation of the NBA-SPIDEL at the Government House, Agodi, Ibadan, said that the State will do what is necessary to support the staging of the NBA-SPIDEL Conference in Ibadan.

He also said that his administration will continue to remain sensitive to the yearnings of the people, adding that the Government will always put the people’s interests first in all its policies and programmes.

While addressing the delegation led by chairman of the NBA-SPIDEL, Prof. Paul Ananaba, SAN, at the Government House, Agodi, Ibadan, the Governor stated that in view of the challenges facing the country, stakeholders must work towards actualising fiscal federalism.

A statement by the Chief Press Secretary to the Governor, Mr. Taiwo Adisa, quoted the Governor as saying that what the country needs to do at the moment is to plan how it can get the best in terms of federalism, adding that if the federal system is right, development would be engendered in the country.

The Governor added that the NBA-SPIDEL is of good interest to him and members of the public at large, saying: “I am glad that you are bringing the conference here, because that is what we want to see. We want people to come around and experience what we are trying to do here. And we will support you.

“SPIDEL is something that is very interesting to us because I always tell people that this Government was put in place by the people. We did not come in through any godfather. We did not come in because we had federal might. We did not even have local might when we were about to get elected.

“So, we can only run a Government that is sensitive to the yearnings of our people. And if we are hosting a conference of the Nigerian Bar Association’s section on public interest and development, we think this is an appropriate place for that to happen.”

Makinde, who also used the occasion to extol the virtues of the legal profession, describing it as a noble one, urged lawyers to play good roles in actualising development in the country.

He stated: “As you rightly noted, your learned colleagues are more in this cabinet and they are some of the best hands that we can have around. I can say that in terms of contributions at our meetings, they have not disappointed us so far.

“So, what that tells us is that the legal profession is very old in this country and you have contributed so much to the development of the country. So, please keep striving to do more.”

According to the Governor, it has become imperative for the country to make drastic changes in terms of the federalism it is running, noting that fiscal federalism has become non-negotiable in the face of the myriad of challenges facing the country.

He said: “One of the things that I believe we have to deal with right now as a country is how we can get the best for our country. What kind of arrangement can give us the best? I have been accused of completing projects initiated by the previous administration and we are not ashamed to do that. I will like to tell you the reasons so that when you have the opportunity to weigh-in, you can know which direction to go.

“If you look at the industrial revolution, the first wave, which basically talked about mechanization, when you move from that to the second wave – the second wave rose on the first. The third is riding on the second. So, if you are able to solve a particular problem, when you want to move, you move farther away and consolidate on what you have done before. So, we have the challenge of what kind of federation are we supposed to be?

“Since I came to Government, I have been reading a lot of books on why our forefathers, the people that negotiated independence for this country, chose federalism and what we have done in terms of pushing that further up until now.

“There are some of the challenges we are faced with, which I can track back to the issue of true and fiscal federalism for the country. And lawyers have a very big role to play. I believe if we have proper federalism, the development will come, which is of particular interest to me and the public.

“All the tension we are having all around – the insecurity and others – can be traced to lack of opportunities for the people. We are producing young graduates and we are not able to properly engage them.

“My Commissioner for Finance is in Abuja now for FAAC. If we don’t have it, the whole place will probably collapse. But why should that be? If it is a federation, why are we all running to Abuja every month to look for federal allocation? So, those are some of the challenges that I know when legal minds come together, they can assist the country. You can weigh-in and let your voices be heard.”

The Governor maintained that some of the requests made by SPIDEL would be looked into, promising to provide a safe and secure environment for the conferees.

Earlier, the Chairman of the NBA-SPIDEL, Prof. Paul Ananaba, SAN, said that the purpose of the visit was to inform the Governor about its conference scheduled to hold in Ibadan between May 23 and 26.

He said the visit was to secure the Governor’s commitment towards a successful hosting of the conference in Ibadan, with the theme “The role of Public Interest in Governance in Nigeria.”

He commended the Governor for delivering so many dividends of democracy to Oyo State residents in the last two years and how he has been able to redefine good governance with a focus on people-centered policies.