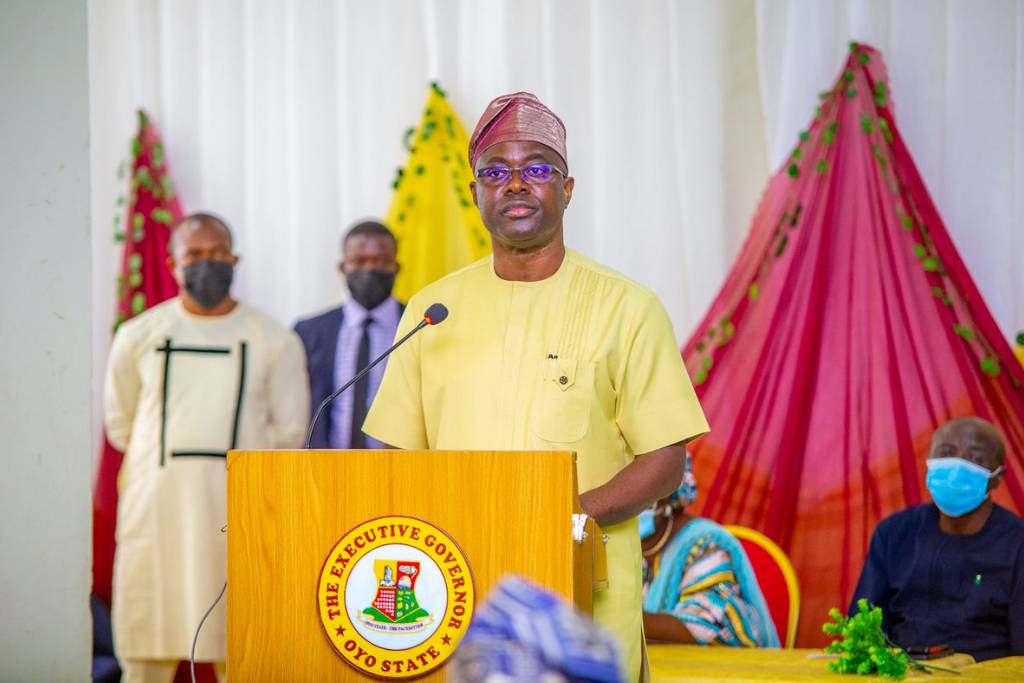 *Donates N2.5M each to families of 7 slain Amotekun corps

Oyo State Governor, ‘Seyi Makinde, on Thursday, said his administration will continue to deploy available resources for the growth and development of the State, calling on residents to continue to participate actively in the budget-making process.

The Governor stated this while speaking at the Stakeholders’ Consultative Meeting on the 2022 Budget, held at the Ogunlana Hall, International Conference Centre, University of Ibadan.

The meeting was the third of its kind, after similar engagements had been held on the 2020 and 2021 Budgets.

While speaking, Governor Makinde noted that there is no zone in the State that has not felt the impact of his administration’s developmental efforts since it assumed office a little over two years ago.

He pointed out how over 500 projects have been completed in the education sector alone, adding that while the Moniya-Iseyin Road and the LAUTECH-Under-G Road, Ogbomoso have been completed, several others including the Ajia-Airport Road with spur to Amuloko; Oroki-Gedu-Asipa Road, Oyo, and others are on-going.

The Governor added that many projects had been achieved with the Alternative Project Funding Approach, APFA, which allows contractors to execute projects with their resources while the Government will repay them over several budget cycles.

A statement by the Chief Press Secretary to the Governor, Mr. Taiwo Adisa, quoted the Governor as saying that the Government will continue to do what the people ask it to do in terms of development.

He, however, added that his administration will also continue to evaluate the demands of the people and come up with the best option in line with available resources.

Governor Makinde maintained that as part of efforts to continue to develop the State, the administration has secured a verbal approval from the Federal Ministry of Works to construct the Oyo-Iseyin Federal road, stating that the State would get a written approval in the coming week and go ahead to flag off the important road.

Makinde, who commended the Minister of Works and Housing, Mr. Babatunde Raji Fashola, for his role in giving the approval, warned opposition politicians to stop playing politics with development.

He added that the performance of the 2021 budget as of June 2021, was already at 60 per cent and that the Government had been working towards achieving a 75 per cent performance, subject to the improvement in revenue.

He said: “This is the third in the series of stakeholders’ meetings we have held since we came into Government in 2019.

“Our meeting today is in keeping with our promise to always have the input of the people when we are producing the Oyo State Budget.

I believe we should also have a session at the beginning of each year where we can give the report of the performance of the previous year’s budget.

“So, early next year, we will call a wider stakeholder meeting where we will give you the report of our budget performance for the year 2021.

“For the first time last year, we had stakeholders’ meetings in all the geopolitical zones in Oyo State. And this year, we are continuing with this inclusive practice. As we go around to the different zones in Oyo State, we want to, again, hear from you as we commence the budget planning for the 2021/2022 fiscal year.

“A few weeks back, the Speaker came to me and told me that the Ibarapa zone is lagging behind in terms projects. In all honesty, he appreciated the farm estate we are trying to put up there and appealed that we should fast-track the process. And now, the contractor has been mobilised for the Ido to Eruwa Road project.

“So, I can authoritatively say that there is no zone in Oyo State that this Government has not touched.

“We will continue to deploy the resources of Oyo State for the growth and development of our State. We have always stated that this Government is your Government.

Governor Makinde, who promised to continue to use the Alternative Project Funding Approach, APFA, for capital project execution and to implement most of the residents’ requests at the previous stakeholders’ engagement, said contracts have been awarded for the installation of a mini-grid energy project in Ogbomoso South, Atiba, Ona-Ara, and Iwajowa Local Government Areas.

“In addition, almost N400million was spent on the purchase of 1,194 metric tonnes of aluminium sulphate to boost the production of potable water in the State.

“Let me also mention that we have awarded the contract for the construction of two-bay permanent Fire Stations at Atiba and Ibarapa Central Local Government areas,” he said.

Speaking on the issue of security challenges in the State, the Governor maintained that the administration has put a lot of measures in place to combat the challenges, including the setting up of the Amotekun Corps and massive investments in the security sector.

The Governor used the opportunity of the gathering to call for a minute of silence for seven Amotekun Corps, who have lost their lives in the line of duty, stating that the Government has approved N2.5 Million for each of the seven families of the slain Amotekun members and that it would also undertake to give scholarships to some of their children where possible.

He urged residents of the State to always report their suspicion on security-related issues using the 615 code, adding that when they see something they should say something.

He added that the State will give equal opportunities to all zones, noting that though resources are scarce and the State needs to draw a scale of preference on projects, the Governor has proven to be a good manager of resources.

He maintained that with the good financial management skills of the Governor, the people of the State will continue to enjoy quality project delivery and sound programmes and policy implementation, which he summed up as the ‘GSM Effect.’

Representatives of the Olubadan of Ibadanland, Oba Saliu Adetunji; Local Government Areas in Ibadan main city; professional and artisanal bodies, market organisations, physically-challenged, youths and women groups had taken turns to commend the Government and to table their demands for the 2022 Budget.