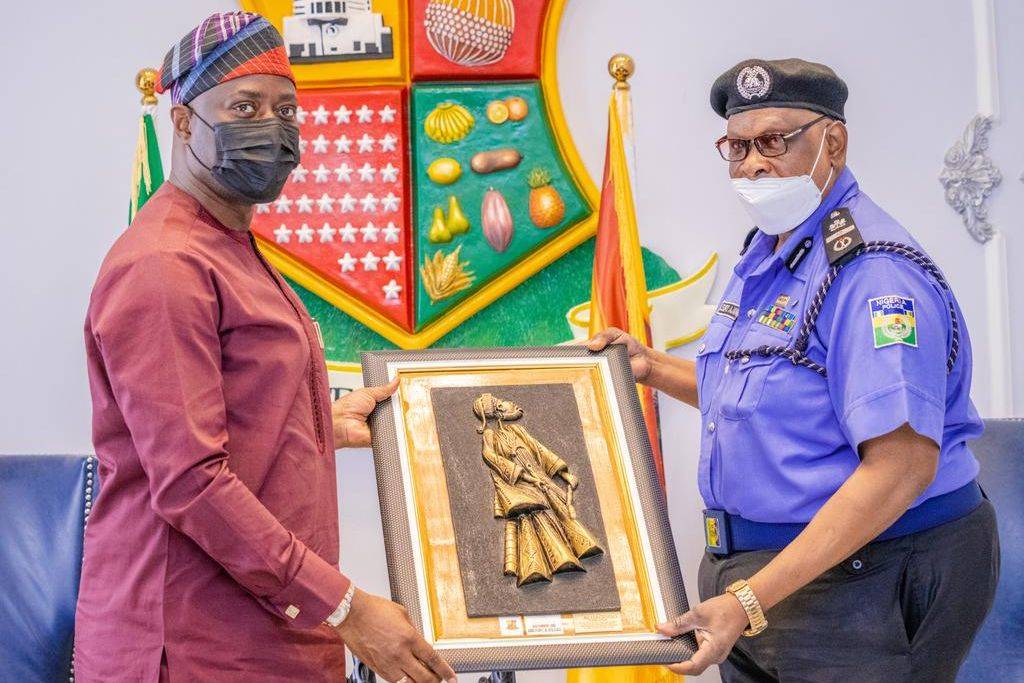 *We will police with the people – AIG Ajani

Oyo State Governor, ‘Seyi Makinde, on Tuesday, said his administration will continue to work with the Nigeria Police and other security agencies to improve security in the State.

The Governor, who stated this while hosting the new Assistant Inspector General of Police, AIG, in charge of Zone XI, Osogbo, AIG Olasupo Ajani, at the Governor’s Office, Secretariat, Ibadan, assured of continuous support for the Police through the provision of logistics and other necessary support systems.

A statement by the Chief Press Secretary to the Governor, Mr. Taiwo Adisa, quoted the Governor as saying: “Oyo State has been a little bit peaceful but we have serious challenges, security-wise, in the entire country.

“Also, at this time, we are faced with economic issues. So, if you have to do your work in the face of those challenges, it is almost like being hit twice because the work itself is difficult. When you have an atmosphere of economic prosperity, the people are not agitated but, now, any small thing, people are tensed up.

“Anytime I’m on the road, I witness road rage, aggression and all of that. These are not really normal because, for us, we used to be our brothers’ keepers. But a lot of people are tensed up and before you know what is going on, aggression is transferred. And when you now have to carry out your policing work within the context of these events, it becomes extremely difficult. So, we will continue to support you, show understanding and work with you through this challenging period.”

The Governor also used the opportunity to appreciate the Zonal Team and Osun State Command of the Nigeria Police for maintaining a peaceful atmosphere at the last PDP zonal congress, which, he said, was adjudged the most peaceful zonal congress for PDP in the entire country.

He added: “I want to take this opportunity to, first of all, say thank you to the team from Osogbo; the Zonal Team and Osun State Command of the Nigeria Police. I was there for our zonal congress. Yes, it was quite challenging, because before the congress itself, the gist was that there will be bloodshed and everybody became apprehensive. But the Zone and the Osun Command took complete charge and maintained a peaceful atmosphere for us and that made the congress to be adjudged the most peaceful zonal congress for PDP in the entire country. So, I take this opportunity to say thank you to the team.”

The Governor equally commended the Oyo State Commissioner of Police, CP Ngozi Onedeko, and her team for their unrelenting efforts and commitment in protecting lives and properties of the people of the State, adding that his administration will continue to work together with Nigeria Police.

“For us in Oyo State, we are appreciative of the work that the Commissioner of Police is doing here. We operate like the same family. And everyone in my team here has shown commitment to work effectively.

“Initially, during the EndSARS protest, some said that I don’t like the Police but that is far from the truth because when it comes to internal security in this country, we don’t have alternative. So, we will continue to work together. For the Zone also, I will work with the officers and men,” the Governor added.

He maintained that his administration would continue to prioritize the welfare of the officers and men of the Police Force in the State and by extension, Zone XI Command.

“I am available every time. Do not hesitate to call me when you need our help. For us, we are not sparing any effort to keep our people safe and secure and we know that when you don’t have a lot to spend because of the economic situation, it is difficult to think of how to take care of the welfare of the people. But I can assure that we will still prioritize the welfare of the officers and men of the Police Force working with us. We will also extend to the zone every now and then.

“So, I want to wish you a successful tenure of office and I also pray you will go higher and higher,” Makinde stated.

Earlier in his remark, AIG Olasupo Ajani, said the purpose of the visit was to formally inform the Governor of his arrival as a new AIG Zone XI, and to also appreciate the Governor and the citizens of the State for accommodating and supporting the Nigeria Police.

In his words: “I am here this morning to formally inform you of my arrival and to thank you immensely for your help and support for the Police in Oyo State, most especially to my sister, the CP. We have spoken about everything you have been doing for the Police.

“I was also told that even yesterday, you donated another 6 Hilux Vehicles for patrol. We thank you very much and we hope you will continue to support us.

“I want to also solicit for your collaboration in all our areas of need. On a more serious note, Police would not succeed without the will of the people. So, in this light, we want you to help us sensitize the people to support the Police. There must be cooperation between them.”

The AIG promised that his officers and men will police with the people and not police the people of the State, adding that this was in accordance with the policing strategy of the Acting Inspector General of Police, Alkali Baba Usman.

He said: “On our plans to nip the issue of insecurity in the bud, we only need to increase intelligence gathering. Without intelligence, we won’t be able to get these people. So, we need the support of the people; when they hear something, they must say something. As soon as we hear what they are ready to say, we also will do something.”