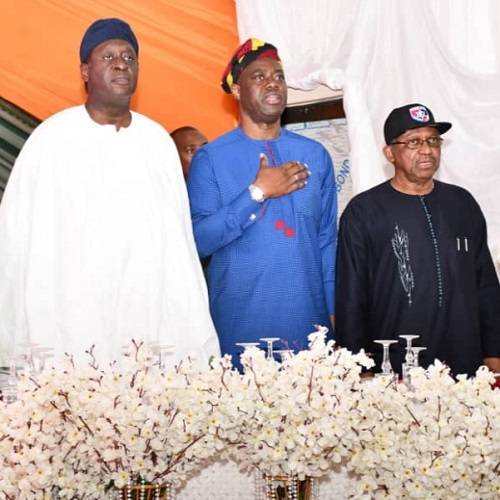 The Governor, who stated this while speaking at the grand finale of events marking 90th anniversary of GCI, said that his Government is intent on restoring the lost glory of education in Oyo State.

He also promised to reclaim the lost glory of the education sector in Oyo State by collaborating with different stakeholders to uplift the sector.

A statement by the chief Press Secretary to Governor Makinde, Mr. Taiwo Adisa, quoted the Governor as saying that the State would soon advertise for the recruitment of teachers.

He stated that his administration would continue to place great importance on the future of the children of Oyo State.

In attendance at the event were the Minister of Health, Dr. Osagie Ehanire, who is an old student of the school; the president of the Government College Ibadan Old Boys Association (GCIOBA), Dr. Wale Babalakin, SAN; Chief Lekan Are; former Governor Omololu Olunloyo; the Chief of Staff to the Governor, Chief Bisi Ilaka, who is also an old student and other Government functionaries.

Governor Makinde commended the Government College Ibadan Old Boys Association (GCIOBA) for their contributions towards reclaiming the glory of the historic school, especially the renovation of the old hostels of the school, among others, promising to partner with them to make GCI the poster school of Nigeria.

The Governor also expressed his readiness to collaborate with stakeholders in the education sector to deliver qualitative education, noting that everyone has to come to the table on the policies put in place by the State Government, because the Government and the Governor could not do it alone.

Governor Makinde maintained that it had been a challenge for Government to drive its free qualitative education policy because there were corrupt elements trying to frustrate Government.

He insisted, however, that he would not relent in delivering free qualitative education to all students in the State.

The Governor explained that he had sent out fact-finding emissaries to some schools in the State, which discovered that the free textbooks provided by the State were not being distributed to students in some schools, noting that he had already given a directive that the books must reach every student.

“We will soon advertise vacancy to recruit teachers. If the PTA teachers are good enough and have the prerequisite qualifications, they will be employed. But the bottom-line is that the future of our children is at stake here. If we are saying that government is providing certain things and we cannot have value for those things, then it is a big problem and that is what we are faced with right now.

“I am saying boldly here that education is one of the pillars on which this administration is resting on. It is only when we give knowledge to our people; that is when they can take themselves out of poverty,” Governor Makinde said.

“It is a big challenge and I have to come out to say this. When we came in, we scrapped the N3,000 education levy but we have been challenged by those corrupt elements within the education sector. I have heard cases where I was told certain schools were burgled because we scrapped N3,000 but did not provide grants to schools. They said they could not employ guards to secure the school environment. If I look at that school and also look at GCI, where do you think I will put further investment?

“I have also heard about situations where they came back to us and said some certain schools had only five instead of 25 teachers out of which 20 were PTA teachers. They also said they could not pay the PTA teachers because the Government stopped them from collecting N3,000 education levy. They never declared to anybody that the levy was the same as PTA levy. So, I said to the Permanent Secretary that we will give Grants to schools but there must be accountability.

“I care about this mandate the people of Oyo State have given to me and I care about the promises I made to the people during my electioneering campaign. So, the challenge is out there and I want to ask that the good people within our midst have to come to the table for the educational policies we are putting in place to succeed.

“If you don’t come to the table, God forbid, Seyi Makinde alone can’t do it. Government alone cannot do it. We need people that can tell us what is going on.

“I have heard some reports, even from this school, that the notebooks and textbooks we sent out were not distributed. I asked them the reason why they were keeping the materials almost mid-way into the first term but they gave excuse of not being able to get the logistics to move those materials from Local Inspectors of Education to the school. And I said to them that I approved money for those materials around the first week of September.

“But there was good news after that encounter. They started the distribution immediately and I think if some of the students are here, they can confirm they have those instructional materials now. So, we need things like that to happen in all the schools in Oyo State.

“What will make the difference for us are not those giant steps but the little ones we take. So, I will partner with the GCIOBA to achieve that objective. I will encourage this school. I am with you all the way and we will together bring back the lost glory in our education sector in Oyo State,” the Governor said.

Also speaking at the occasion, Chairman of GCIOBA, Dr. Wale Babalakin said that the Old Boys Association of GCI have committed over N500 million to the development of the school.

He said that the association would partner with the state government to return boarding system to the school.

According to him, the idea of a GCI as a day school without boarding system was an antithesis.