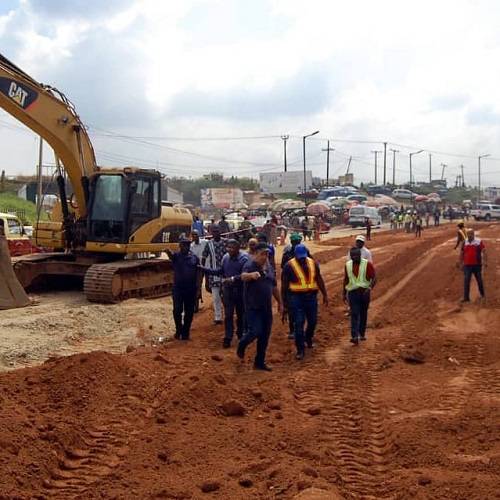 Contractors of ongoing road projects in Oyo State have been told they have a maximum of three months to do the jobs that would be commensurate with the mobilization funds they have received from the Government or Government would take necessary steps to enforce contractual agreements signed at the commencement of their contracts.

The State Commissioner for Public Works and Transportation, Prof Raphael Afonja, revealed this on Tuesday in Ibadan while on inspection tour of ongoing road projects in the State.

Afonja added that if after the expiration of the three months grace period and they were yet to deliver on the work that would meet the acquired funding, necessary steps would be taken as regards some of the clauses stipulated in the initial agreement.

“We are here to inspect the level of work done in relation to the mobilization gotten by the contractors and with the spate of work, I am promising the contractors that Government will not allow the public fund to go waste or be misused, there were terms in the contract agreements signed by the Government and contractors when they were given the jobs, they will have to deliver on this.

“They have three months from now to meet up with the work that will commensurate with the mobilization they were paid or Government will be forced to revisit these contracts and do the needful.

“The purpose of our visit today was to follow up on the initial assessment of the projects we met when we came on board and also to make sure that they’re doing quality work on site and also to catch up on lapse time that has been wasted.”

According to the Commissioner, mobilization funds have been given to the contractors and as a result, they have no excuse not to work, more so they needed to utilize the dry season to work effectively.

He said before the advent of the present administration, the Ministry of Works was not allowed to supervise any project, that the services of consultants were always engaged for road designs and supervision.

“Before we came on board, Ministry of Works workers were not allowed to supervise any project by the previous administration, they brought in consultants that did the project design and supervision, but right now, we are taking ownership, now we are going back to review the designs and the bills to ensure there are no breaches of any form anywhere and that quality jobs are done in the State.”

He charged the contractors to engage more manpower on site to work day and night to ensure timely completion of the jobs, adding that most of the contracts were awarded over three years ago and ought to have been completed.