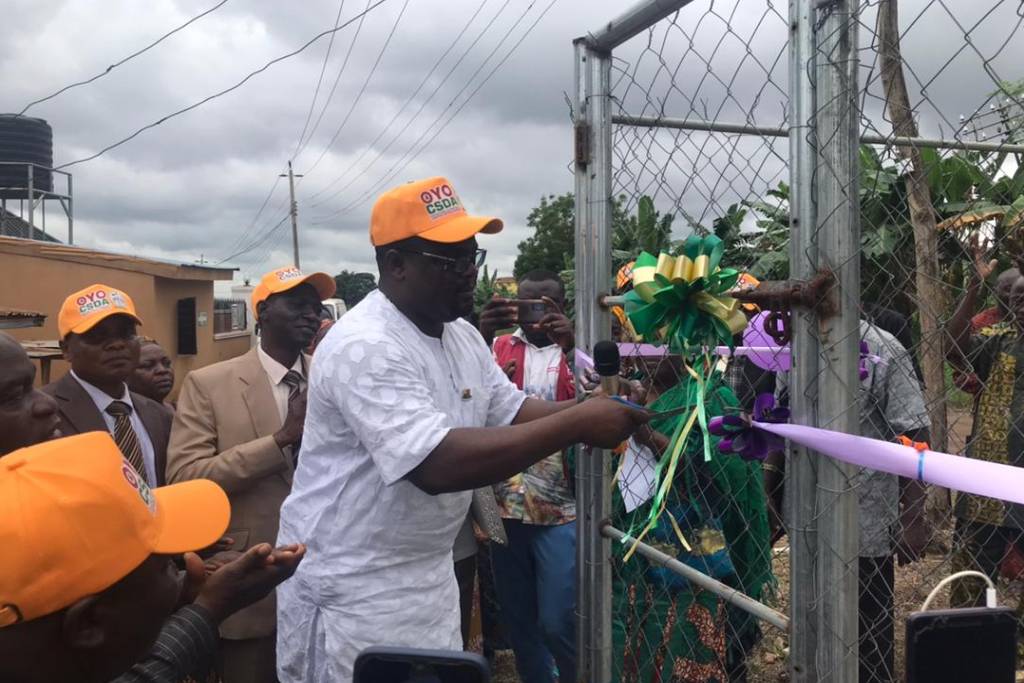 The Oyo State Community and Social Development Agency (OYCSDA) on Tuesday, commissioned nine projects at different parts of the State, to the excitement of residents who applauded the initiatives for lifting their standard of living.

The project, which is the replication of the World Bank/Oyo State partnership programme which ended in June 2021, include support for electricity extension through purchase and installation of transformers as well as provision of motorized boreholes where needed.

Among the communities that benefited from the intervention programme are Carpenter Community at Ido local government in Ibadan where a 300kva transformer was procured and installed at the cost of #8million (Eight Million Naira), out of which a million naira was contributed by the community.

At Olubode Compound, Mato Compound, Onideure Compound and Labo Compound, all at Ibadan South-East local government, the OYCSDA team, led by the Secretary to the State Government, Mrs Olubamiwo Adeosun, commissioned a motorized borehole per community.

The team also commissioned a 300kva/33 transformer at Oluwanisola Community, Kute at Lagelu local government at the cost of #7million (Seven Million naira), out of which the community contributed #700,000 (Seven Hundred Thousand Naira) while a 300kva transformer was also procured and installed at Opeloyeru Community, Oke-Afos at Ilora, Afijio Local government.

In her address, the Secretary to Oyo State government, Mrs Olubamiwo Adeosun urged the people of the community to encourage the government to do more developmental projects by maintaining those available to them.

She promised the joyful crowd of residents at the Mato community that the present administration in the State, under the leadership of Governor Seyi Makinde would continue to meet the demands of the people.

“Now that this particular need has been met by the State agency, what is required of us as the beneficiaries is good maintenance so that the water project will be enduring and the government will have the resources and time to look at other areas of our need.

“I urge you all to give your support to the government so as to get more dividends to benefit you and raise our living standard, you know that he who gives water gives life, the present administration in the State has done its own by providing portable water for us, it is left for us to also support the government in achieving success in its policies, actions and programmes.”

A former two times member of the House of Representatives, representing Afijio, Atiba, Oyo East and Oyo West Federal Constituency who was also a former Chairman of Oyo State Road Maintenance Agency (OYSROMA), Hon. Kamil Akinlabi, while appreciating the Oyo State government for replicating the World Bank initiative for the rural communities, also enjoined the beneficiaries at his constituency to safeguard the projects and provide adequate maintenance.

He described Governor Seyi Makinde as a goal-getter who always has the interest of the masses at mind in whatever policy the State embarks upon.

The Chairman, Oyo State Community and Social Development Agency (OYCSDA), while addressing the beneficiaries, said the replication project was borne out of the agency’s call for continuity for the World Bank’s assisted projects which ended in June 2021.

He added that the agency approached the governor of Oyo State on the need to replicate the project and approval and funding were given for the nine projects which have all been completed and commissioned on Tuesday.

He used the occasion to implore residents of the benefiting communities to imbibe a collective responsibility approach to maintaining the projects as other areas of need would still be focused upon by the agency, while the community provides security and maintenance for the water and electricity projects.

“We appreciate the community leaders and the Project Monitoring Committees for delivering on the projects, it is more important to note that the State government intentionally allowed the benefiting communities to also co-fund the projects so as to entrench the sense of belonging in maintaining the facilities.

“It is our wish that this will continue as we have seen situations whereby some Project Monitoring Committees failed to deliver because they could not account for the money released to them, this attitude would be counter-productive to our wish to uplift the rural communities.”

While appreciating the government and OYCSDA, the Chairman, Community Development Project Monitoring Committee for Oluwanisola Community at Kute, Lagelu Ibadan, Alhaji Wasiu Aliu promised that the transformer would be well taken care of, as the community has for a long time, suffered power outage before the intervention by OYCSDA.

The representative of Akibio of Ilora, Oba Stephen Ilufemiloye Oparinde 11, Hon. Kayode Adio gave the assurance that nothing untoward would happen to the transformer installed at the Opeloyeru Community at Ilora, as it has become the property of the community, which also is its responsibility.

Present at the commissioning events at the Ibadan and Oyo township communities were the Special Adviser to Governor Seyi Makinde on Project Intervention, Mrs Aderonke Adedayo, the General Manager, OYCSDA, Mr Salau Jelili and other management staff members of the agency, representatives of traditional rulers, market men and women, community leaders and youths as well as politicians.