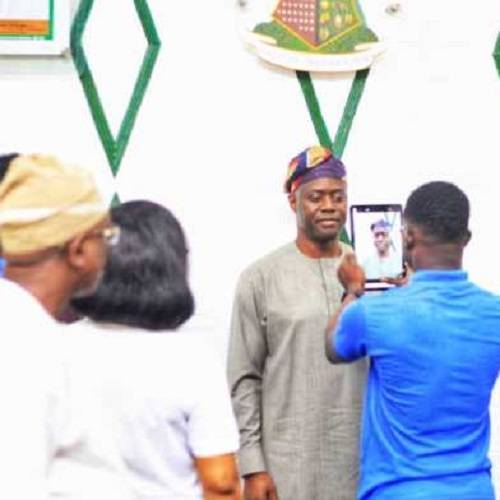 With the development, Civil Servants, Public Officials, Teachers, Local Government employees and Retirees are to be screened in phases in the exercise taking place at State Secretariat, Ibadan from Wednesday, 20th November, 2019

The flag off ceremony which held at the Executive Chamber of the Governor’s office, the Governor was screened by the consultant engaged by the Government Sally Tibbot Consultant.

Speaking after his screening, Governor Makinde reiterated that the exercise is aimed at ascertaining all persons drawing money from Government’s coffers, adding that the exercise was not basically about verification of certificates but for Government to curb wastage, plug leakages in its payroll and have valid data for planning purposes.

He also assured the workers that while the screening lasts, no worker would be denied the salary.

Recall, that the Governor had cried out upon resumption of office that the State wage bill increased by N1billion between the time he was declared the winner of the March 29 Governorship election and May 29 he was sworn in to office.

Makinde said, “This screening is not about certificates; this exercise is simply to determine the number of staff and the amount we are paying. The exercise is for all workers in the state: Civil Servants, Public Servants, Higher Institutions’ Workers, Pensioners, Political office holders, anybody drawing their salary from the State Government.

The implementation of the findings is at the end of the exercise. The data will be utilised for planning purposes. Yes we have to negotiate the minimum wage; we have to know the impacts, effects and plan on how to implement the decision.

“People do not have to worry. The people that need to worry are those that are unjustly benefitting from our patrimony.”

`ervant or pensioner will be treated unfairly by the exercise, noting that the target is to improving the welfare of workers and adding value to the state’s civil and public service.

Noting that such exercise was usually used to witch hunt, Ahmed urged the State Government to ensure that labour leaders are actively involved in the exercise so as to sustain industrial harmony.

With particular reference to teachers, he also expressed fear that the exercise would affect school work with teachers having to leave classes to be screened at State Secretariat, Ibadan.

On his own part, representative of the Trade Union Congress (TUC), Mr Olayiwola Yinusa urged the State Government to disclose the fate of those cleared in the last screening exercise conducted by Government.

He also urged the Makinde led Government to ensure that the exercise does not affect commencement of implementation of the new salary structure.

Furthermore, Yinusa expressed fear at the challenge that workers may face in getting bank statements, as part of the screening requirements.