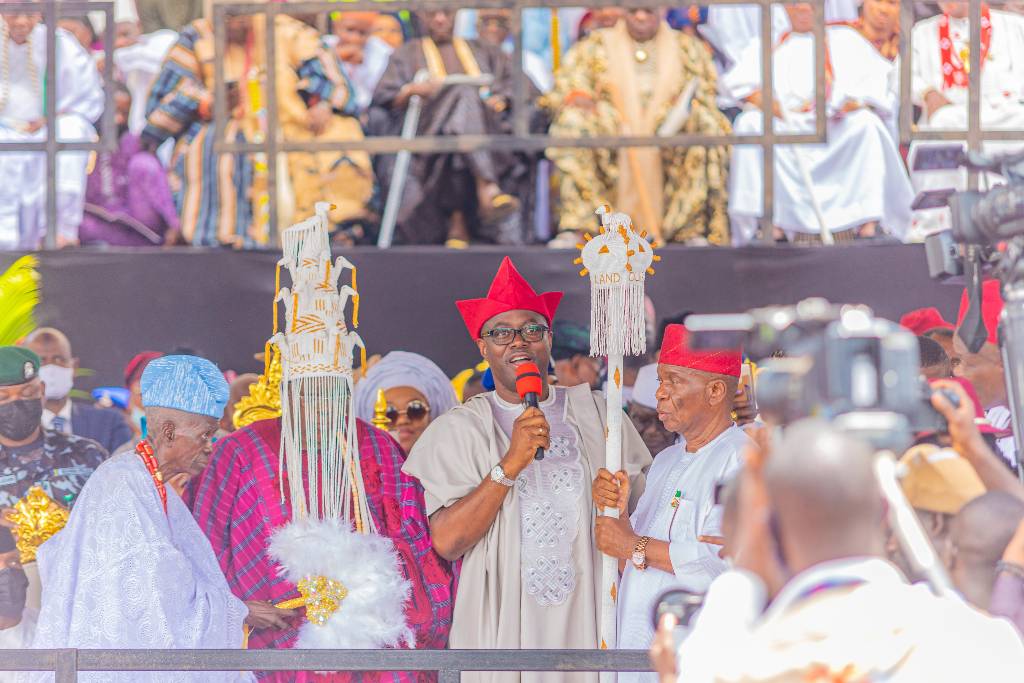 Being the speech delivered by His Excellency Seyi Makinde during the coronation ceremony of the 42nd Olubadan of Ibadanland, His Imperial Majesty, Oba (Dr) Mohood Olalekan Ishola Balogun Alli, Okumade II.

It is a great honour to be here today to celebrate the coronation of His Imperial Majesty, Oba (Dr) Mohood Olalekan Ishola Balogun Alli, Okumade II, as the 42nd Olubadan of Ibadanland.

We rejoice with the sons and daughters of Ibadanland, both at home and in the diaspora. The massive crowd gathered here today, speaks to the importance of this occasion.

This is an age-old tradition that we must continue to uphold. Yes, since the first coronation ceremony was held in the 1850s, we have maintained in the best way possible, given various circumstances, one of the best succession lines in Yoruba history.

So, we rejoice that today, we crown a new Olubadan.

As a Bible Proverb says, when the righteous are in authority, the people rejoice.

Our gathering here today is a victory for the sons and daughters of Ibadanland, and restoration of our traditional systems.

I have always taken a stand for the integrity of our traditional systems, and so I am especially delighted that today, Friday, March 11, 2022, the sanctity of the emergence of this century-old dynasty has been restored.

His Imperial Majesty, Oba (Dr) Mohood Olalekan Ishola Balogun Alli, Okumade II, has distinguished himself as an excellent professional. He has without doubt contributed and will continue to contribute to the development of Ibadanland and Oyo State at large. He has served both in private and public service and has even represented Oyo State at the Senate. I must say that we share something in common, we both worked with Shell Nigeria at one point in our lives. He is indeed a man of many parts.

And so, we rejoice that His Imperial Majesty, Oba (Dr) Mohood Olalekan Ishola Balogun Alli, Okumade II, climbed the 22 steps on the Olubadan line starting from the lowest rung of Jagun Olubadan over a period of 39 years. We rejoice because His Imperial Majesty having seen how things were when politics became a factor in the ascension to the throne, is in a great position to defend the traditions of our people and ensure that this does not happen again.

And I want to restate that even though we politicians will come and go, sometimes, to satisfy our political whims, we may make decisions that do not protect our traditional systems. But this is why the custodians of our culture must always take a stand against us tinkering with age-old traditional systems.

Our elders, the members of the various councils, the chiefs, our traditional fathers are the gatekeepers and they must remain steadfast in their role. Remember, no politician can destroy any system without the cooperation of some members of these systems.

Therefore, I want to use this opportunity to ask that Kabiyesi and the Olubadan-in-Council work to ensure that the laws having to do with the ascension to the throne of Olubadan remain sacrosanct. If there are to be any amendments, they should be self-conceived. The Olubadan-in-Council should remain self-regulated without any external interference from the political class.

And so, I join the Oyo State Government, the sons and daughters of Ibadanland and the good people of Oyo State, to wish His Imperial Majesty, a long, peaceful and successful reign. May the land of Ibadan experience unequalled development, and tranquility during Kabiyesi’s reign.

Thank you and God bless you.