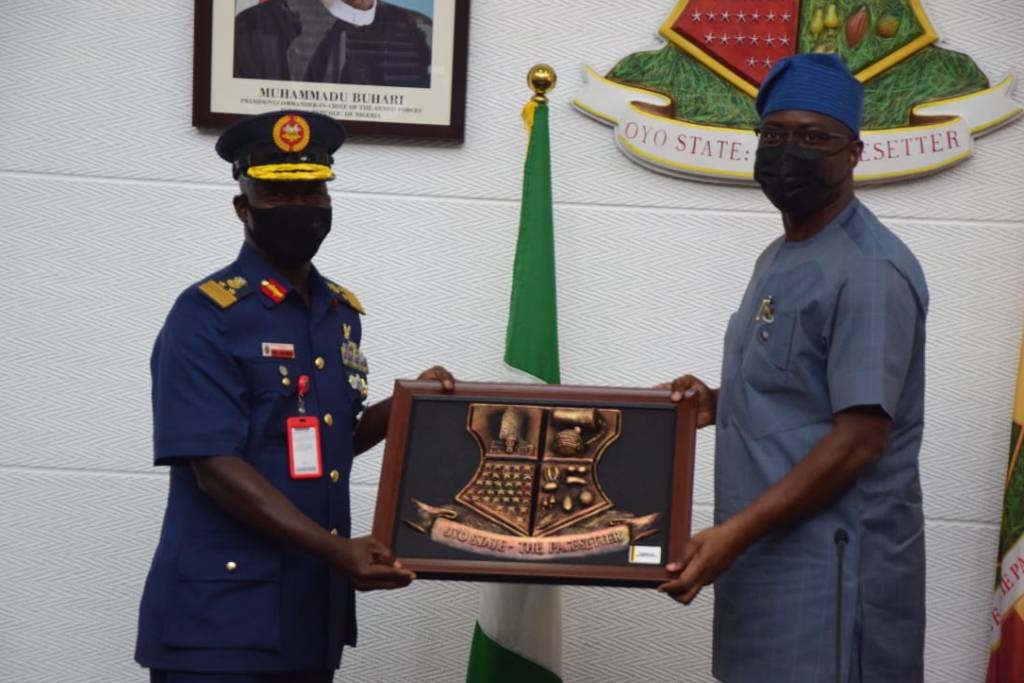 18 Nov 2021 How we Enhanced Security Architecture of Oyo-Makinde

Governor Oyo State, ‘Seyi Makinde, has said his administration has enhanced the security architecture and boosted the economy of the State through the “Light Up Oyo Project”.

He said this while receiving delegates from the Armed Forces Command and Staff College, Jaji, led by Air Vice Marshal Ebenezer Alade.

Makinde appreciated the delegates for choosing Oyo as one of the States to carry out their research tagged, “Enhancing Natural Security Through Social Economic Development”.

The Governor, in a statement by his media aide, said his administration is looking towards resounding successes in its four key pillars, including Health, Education, Security and Economic expansion through agriculture value chain.

Makinde also restated his administration’s plan to keep supporting the security agencies in order to reduce crime to its barest minimum in the State.

“Yes, we are taking as many people as possible off the streets as far as the security situation in Oyo State is concerned. You can go out at night to see what we are doing about the light-up project.

“And what we have done is just about 30 per cent of what we are supposed to do on the project. And I assure that we will attain 100 per cent on or before Christmas.

“That has assisted the security agencies to go out freely. They can see well ahead of them and can plan. We have done over 250km of street lighting within the State,” Governor Makinde said.

The Governor added: “Let me use this opportunity to welcome this study group to Oyo State and also to note, with pleasure, that you also have students from neighbouring countries like Togo and Chad.

“That, I also believe, will enrich the contribution of the students in terms of perspectives and give the opportunities to hear about what has been happening in terms of your command in those countries.

“When we came in, we developed what we call a Roadmap for Accelerated Development of Oyo State 2019-2023. And in that roadmap, we are focused on only four major areas which are Education, Health, Security and Economic expansion.

“Before we came in, a lot of our students were out of school. In the southern part of the country, we had the largest population of out-of-school children.

“But when we asked about the impediments, we found out that the N3,000 education levy charged students by the previous administration was a big impediment. So, we removed it and, since that time and now, we have been able to take over 50,000 children back in school.

“The second major pillar we focus on is health. We have our secondary and tertiary health care facilities. Now, we are in the process of renovating one PHC for every ward in Oyo State.

“We have 351 wards and the meaning of that is if we can provide the basic primary health care at the ward level, nobody should go more than one kilometre from wherever they are staying throughout Oyo State to have access to a solid PHC centre, and that is ongoing.

“The third area of our focus is an expansion of our economy. Since we came in, the IGR was slightly below N2billion every month but now, we are averaging over N3billion. What that has done for us is that it has given us an additional N1billion every month and for a year, it is 12billion.

“And in terms of where we have a comparative advantage, it is in the field of agriculture. If you notice, from here to Iseyin, the land is arable and that is what you see throughout Oyo State.

“We believe that, if we focus on agriculture and agribusiness, we will be able to expand our economy and we are well on that path.

“During the era of the Western Region, we were lucky that they set up farm settlements and what we have done now is to begin the process of upgrading them to farm estates, and we are also doing that.

“The last pillar is security. If you notice, we share an international border with the Republic of Benin. So, everything that is happening in the Sahel has the potential of getting into Nigeria through the border.

“Before we came in, there was nothing like Amotekun. But we set it up, which is our security outfit meant to collaborate with other federal security outfits.

“We have had our own fair share of one-off security challenges but we have been able to react adequately. Few weeks back, there was a jailbreak at Abolongo Correctional facility in Oyo. We lost three personnel but we were able to quickly stay on top of the situation and bring everything under control. So, that is the main focus.”

Earlier in his remarks, the Commandant, Armed Forces Command and Staff College, Jaji, Air Vice Marshal Ebenezer Alade, said the tour of the eight States of the federation is an annual ritual program and part of the school curriculum that allows the students to carry out various research across the states.

Alade noted that security in this era is beyond human security which requires more of social welfare and human development to reduce crime.

“We are on a study tour to Oyo State to meet with His Excellency, Governor Seyi Makinde. I want to appreciate the State for the warm reception as well.

“I want to use this opportunity to appreciate what the Governor has been doing, which we are very proud of. And we pray that God will continue to be with you so that the State will continue to progress and enjoy your good works,” he said.