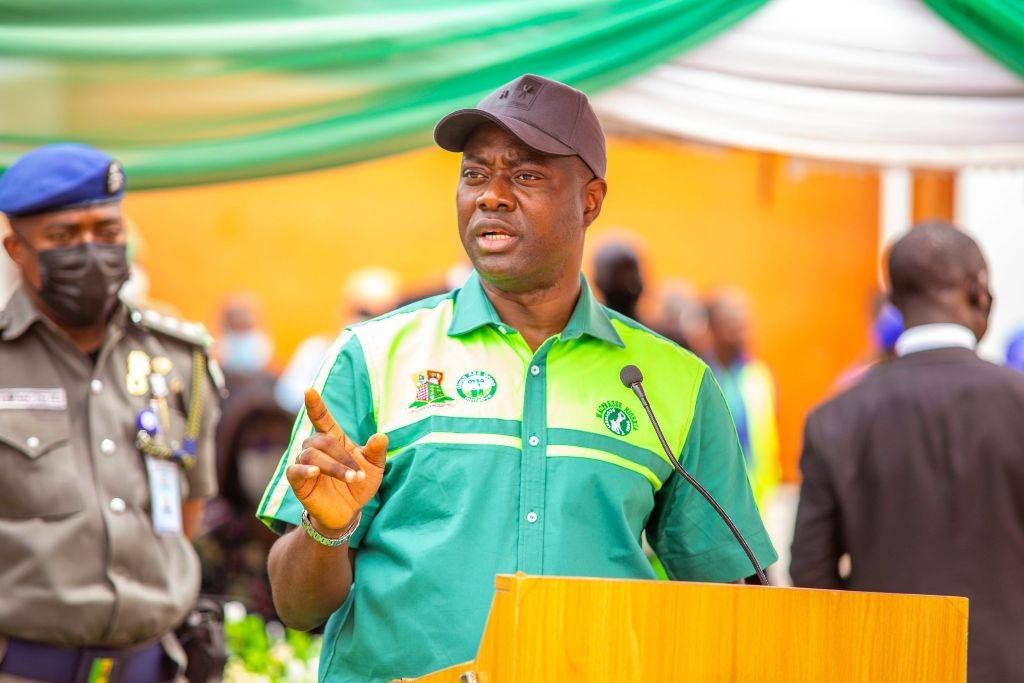 Governor ‘Seyi Makinde of Oyo State, on Thursday, commissioned the Awotan Landfill Project and also unveiled the Clean and Green Waste Trucks, to improve environmental and social well-being of residents of the State.

Governor Makinde, who stated this while speaking at the official commissioning of the Awotan Landfill and unveiling of Clean and Green Waste Trucks, held at the Awotan Landfill, Akufo Road, Awotan, Ibadan, said the project will provide job opportunities for self-reliance to 3,000 residents of the community.

A statement by the Chief Press Secretary to the Governor, Mr. Taiwo Adisa, indicated that the Governor equally pledged to fix the Awotan Health Centre, adding that the Government had the plan to have one standard health care facility in every ward of Oyo State.

He said: “When we were confronted with the issue of waste in Oyo State, we had two main choices. One, a quick fix, which could have happened sooner, or a more complex and far-reaching solution, which would take some time. As you can see, the video clip we just watched is quite complex.

“The quick fix would have just meant that we are just kicking the ball further down the road. Sometimes in the future, we will, again, be confronted with the issue of waste disposal. Maybe then, it will be another administration that will deal with it but we would have gone away with the tag of ‘Architect of Modern Oyo State.’

“One, those who live near this dumpsite, the nearest settlement is just about 200 meters away from where we are right now, would have had to continue dealing with their groundwater contamination and their water will have remained unsafe for them to drink.

“The Baale of Awotan has asked us to fix the health centre here and I want to assure you that we will do it. We already put a plan in place to have one standard health care facility in every ward in Oyo State and we will have 351 of them.

“Secondly, they would have continued to live with the stench coming from this dumpsite. The multiplier effect is that those who have properties for rent around here would have a hard time letting them out and, of course, I have spoken about the health implications as well.

“As a matter of fact, when I met some people here, they said they abandoned their houses here and relocated to the city but, the good news is, they are coming back now.

“I want to acknowledge the immense contribution of our late compatriot and former Commissioner for Environment and Natural Resources, Hon. Kehinde Ayoola. He did all the planning and groundwork to make sure that this project turns out as it is today.

“May the good Lord continually be with his family. Let me also thank the current Commissioner for Environment, Barrister Idowu Oyeleke, for seeing the project to a logical conclusion.

“So, as I said earlier, we decided on the second option. Yes, it took more time, which meant that people complained about refuse disposal for a little longer but we knew that when we accomplish what we set out to accomplish here, the result will be glaring to all.”

Governor Makinde maintained that the success of the landfill project has led to the creation of massive job opportunities, as, according to him, 500 private companies have been registered for refuse collection, with each of them expected to recruit at least six people including drivers and refuse packers.

“We are standing on the ground now and we can see everywhere. So, apart from this environment, the total rehabilitation of this landfill resulted in engaging over 500 registered private companies in refuse collection. Each of those companies will employ at least a driver, a number of packers and others. If you multiply six by five hundred it will give you 3,000 direct jobs.

“Also, about 50 people worked here as scavengers and I don’t think they will continue to scavenge again, because there will be a rise in their take-home. They will be staying here now and those who need whatever they separate will have to come down and buy from them here.

“So, these individuals who worked on this project; contractors and others, we appreciate their efforts and the resultant effect is that we have more funds into Oyo State’s economy. Now that the site is completed, what is next? The benefit of upgrading this dumpsite is immense. We are all breathing easily right now.

“The last time we came here, we discovered that access will be a challenge. We had to look for an alternative route. The Apete-Awotan road is less than 1,500 metres and once you pass this place further down to Akufo junction, the traffic will be less.

“So, in less than six to eight weeks, the problem of access to this place will have been completely solved. And another added sweetener is there is methane gas under here, which will be converted to electricity that will in turn be used to install street lights around here. We will provide the street light and this place will provide the gas that will be used to generate electricity for that purpose,” the Governor added.

The Governor further said that with the success of the project, the newly launched waste management architecture in the State has begun on a sound footing, adding that there will be less refuse on the streets of Ibadan, the State capital.

He said: “Finally, we will have less refuse on our streets because the contractors will be paid per kilogram of debris they bring here. It means anyone that did not collect waste will not get paid.

“Of course, knowing how much each of the registered companies spend acquiring the trucks and other equipment to work with, they will want to recoup their investment. So, they will keep going out to pick up the waste. Suddenly, the waste is now like Gold. This, of course, will translate to economic benefit to Oyo State.

“The more refuse we get here also the better for our waste to wealth initiative. Apart from the gas, some came and said they can convert the waste to fertilizer. So, we will encourage them. If there is an access road to get here to come and do what they have proposed, it is also for the benefit of the residents here.

“So, you can see that the Clean and Green is a total municipal waste system solution.”

Earlier, in his welcome address, the Commissioner for Environment and Natural Resources, Dr. Abdulateef Oyeleke, said that the landfill project was a crucial part of the broad plan to reposition Oyo State, especially the State capital, Ibadan, as a sustainable and ideal metropolitan city free from dirt and filth.

He maintained that the desire of Governor Makinde‘s administration is to modernise its solid waste management and that the project would create a clean, green, and environmentally friendly State.

He equally stated that the landfill would not only open doors of opportunities to residents of the State, but that it would also serve as an excellent renewable energy source and generate hundreds of direct and indirect employment opportunities.

“This project has bridged the sad gap of 21st century urban waste transportation, by introducing the clean and green trucks through PPP arrangement. The trucks are well-equipped to evacuate refuse from the various collection points and safely transport the same to the landfill.

“We appreciate commitment, support, supervision and prompt release of funds to this project. We also thank the Awotan community for the support to the State Government, PSP Waste Contractors throughout the execution period of this project and other stakeholders who have formidably partnered with the Government in contributing their own quota to the development of the State,” the commissioner said.

He appealed to all house owners and facility owners, either private, commercial or industrial in Oyo State to complement the effort of the State Government by promptly paying waste bills in order to achieve a safe, clean and healthy environment.

He added that with the successful completion and commissioning of the Awotan landfill, the contractor will mobilize to Ajakanga dump site for its rehabilitation and upgrading to landfill status, stating that the contractor has promised to complete the project in record time.

The contractor of the project and C.E.O, Messers Macpresse West African Limited, Alhaji Idowu Salawu, said that the Awotan landfill is characteristic of any landfill in the world, adding that history was made because the 50 scavengers, who have been working at the site could not be sure of Material Recovery Facility (MRF) that will handle 50 tonnes waste material every day and increase their income.

He said: “Another good thing that we have derived from here is, before we completed this project, we had been receiving commendation from the residents of this area. What we did here is purely scientific. The gas component here can power 1megawatt of electricity on 1 hectare of land. So, since we have six hectares here, we can generate 6 megawatts of electricity.

“On renewable energy, we will partner with LAUTECH for them to use this place as the practical aspect of the department the Government recently created.”

In his remarks, the Alawotan of Awotan, Oba Dauda Omotosho, appreciated Governor Makinde for making lives meaningful to all the residents of Awotan community and creating an environment that will be habitable for them.

He added that the Awotan community “has never had it this good,” saying the Makinde-led administration has taken the dividends of democracy to their door step.