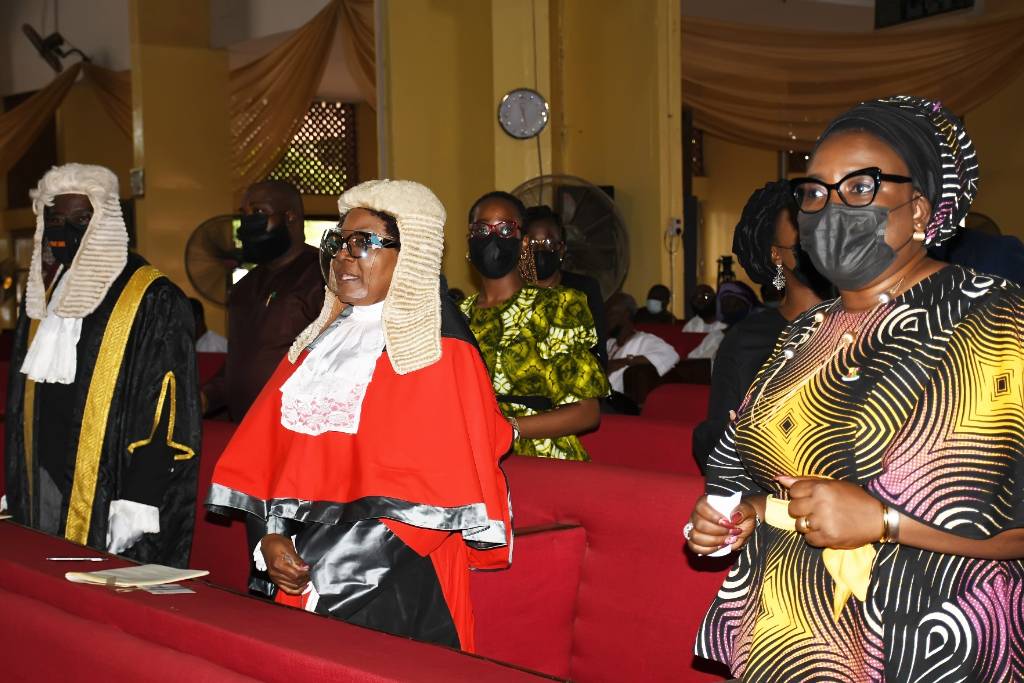 07 Oct 2021 New Legal Year: We are committed to the welfare of Judiciary in Oyo – Makinde

…approves appointment of Five Judicial Officers, as judiciary gets additional N6bn in 2022 Budget

Oyo State Governor, ‘Seyi Makinde, on Thursday, said that his administration is committed to the welfare of all serving and retired judicial officers and workers in the State.

The Governor, while speaking at the flag off of the 2021/2022 Legal Year, held at the Cathedral of St. James The Great, Oke-Bola, Ibadan, commended the judiciary for supporting his administration in the actualisation of the judiciary sector version of the Roadmap for Accelerated Development of Oyo State, 2019-2023.

He stated that his administration has secured the approval of the National Judicial for the appointment of five Judicial Officers, adding that four of them are for the High Court, while the remaining one is for the Customary Court of Appeal.

He maintained that the Government is standardizing the selection and recruitment process in the judiciary to sanitize the sector, adding that Oyo State House of Assembly has already approved the appointment of Justice Moshood Abass as the President of the Customary Court of Appeal.

He explained that judiciary will be getting unprecedented capital budget inflow in the 2022 Budget, as an additional N6 billion capital projects has been included in the budget.

He said: “It, indeed, gives me great pleasure to be here with you today to kickstart the 2021/2022 Legal Year. The beginning of a new Legal Year, which comes after the usual annual vacation in the judiciary is a refreshing time that affords Your Lordships and all stakeholders in the sector to re-calibrate and pitch for higher heights of service delivery for our people.

“Let me start by commending the Judiciary in Oyo State for standing firmly with us in the actualization of the judiciary sector version of the Roadmap for Accelerated Development of Oyo State, 2019-2023, our governance template, which encapsulates welfare for serving and retired judicial officers and workers, and a reform agenda that seeks to place the sector in position of excellence in the service of the people of Oyo State.

“I am therefore pleased to inform this gathering that this administration has approved and started implementing welfare packages for justices both serving and retired, through the revised pension and gratuities scheme meant to take care of all justices.

“Equally, I am pleased to intimate this gathering that the State has secured the approval for the appointment of five judicial officers, four of whom are for the High Court, while one is for the Customary Court of Appeal. They all came through a meritorious process of examination and interviews supervised by the Judicial Service Commission (JSC) of Oyo State.

“Let me reiterate that this process will not only be sustained, I affirm that it has come to stay as this will ensure that every qualified person of Oyo State origin can aspire to the highest position in the judiciary, while helping to maintain the independence of judiciary.

“We are standardizing the selection and recruitment process in this arm of the judiciary as part of our reforms aimed at taking out the rot in the sector.”

He also disclosed that that judiciary sector will be getting unprecedented capital budget inflow in the 2022 budget, adding that an additional N6 billion in capital project funding has been included in the budget.

He said: “With that, we will be completing the New Court in Ring Road; the Iyaganku Customary Court, other JSC structures and the Olomi Prisons.

“This administration is not about to drop the ball in its avowed commitment to the welfare of judges and stakeholders in the judiciary sector in general. The Government has been buying vehicles for judicial officers of the High Court, it also intends to buy vehicles for the new judges and members of the Judicial Service Commission.”

The Governor stated that the State will continue to initiate reform policies that would enhance e- governance procedures in the State.

He added: “Just as we are doing that, we are also not losing sight of the need to reform the sector and bequeath to our State a judiciary worthy of the dreams of our forefathers.

“In that light, we are putting measures in place to accommodate e-filing and enhance online/virtual processes in the Judiciary.

“I cannot end this address without acknowledging the harmonious relationship between the judiciary and the Government of Oyo State. We have your Lordships to praise for this. We are especially thankful that the judiciary maintained its usual calm even in the face of the challenges that plagued the selection of judges that have now been approved by the National Judicial Council (NJC).”

In his sermon, the Lord Bishop of Ibadan Diocese, the Most Rev’d Dr. Joseph Akinfenwa, admonished Nigerians to always put hope in God at all times despite the prevailing challenges of economic hardship, security tension and experiences of hopelessness across the country.

He equally appealed to the Oyo State Government to reaffirm its stance of nobility and justice by returning missionary schools to their original owners.