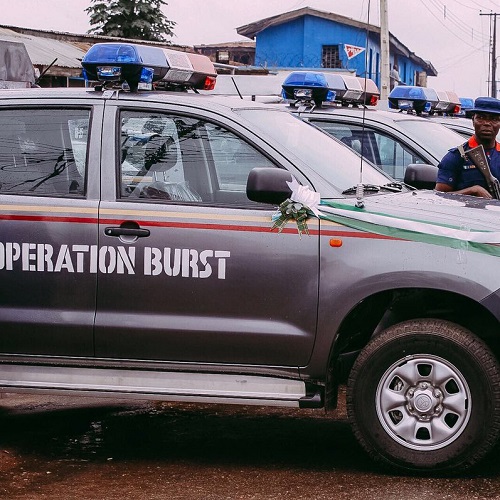 According to the newly appointed Director General of Operation-Burst, Col. James Ajibola Oladipupo (rtd), the Seven (7) suspected robbers were nabbed by Operatives of the Task Force at Olomi during a night patrol in Ibadan.

While parading them at the Agodi Headquarters of Operation Burst, Col. Ajibola said his team is making frantic efforts at ensuring that they fulfill the mandate given to them by Oyo State Government under the leadership of His Excellency, Governor Seyi Makinde to combat crimes.

He affirmed that the operation came up after credible intelligence reports that areas like Olomi, Olodo and Olose in the State were being terrorized by armed robbers.

Col. Oladipupo (rtd) said men of the outfit carried out surveillance of the aforementioned areas during the day and later in the night, the patrol teams swung into action.

He warned other armed robbery gangs lurking around in the State to desist from their heinous acts or be ready to face the full wrath of the law, adding that the outfit would ensure Oyo State is crime-free.

Items recovered from the suspected armed robbers were Motorcycles, one locally made pistol, two cartridges, three cutlasses, charms and cash.

Meanwhile, the Seven (7) suspects have been transferred to the Oyo State Criminal Investigation Department (State C.I.D), Iyaganku, Ibadan, for further investigation and prosecution.