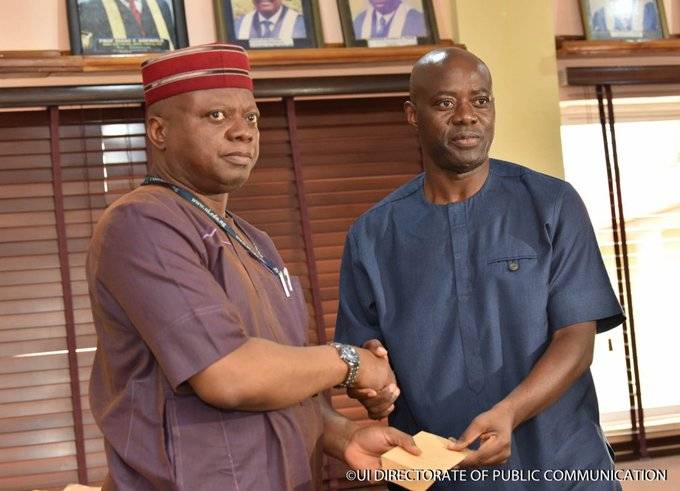 The Oyo State Governor-elect, Engineer Seyi Makinde, on Friday presented a cheque of N25m to the University of Ibadan, UI, as his contribution towards the repair of structures damaged by the recent rain.

Some parts of the institutions, including the historic Trenchard Hall, Wole Soyinka Arts Theatre, Kuti Hall, Balewa Hall, Students Union building were affected by the downpour.

The damage to the Trenchard Hall led the University authority to relocate the inaugural lecture that was to hold in the Hall and subsequent ones to the International Conference Centre, ICC.

The cheque was handed over to the institution’s Vice-Chancellor, Prof. Abel Idowu Olayinka during a courtesy visit to the Premier University by the governor-elect.

According to the governor-elect, apart from the donation, the visit was to thank the entire University community for the overwhelming support enjoyed by his party and also the effort of all participants in the election process for their forthrightness in ensuring that the people’s will was not subverted.

He expressed delight at the popular acceptability of his candidature which cumulated in his victory in all the polling units within the University community. He pledged not to disappoint anyone as he looked forward to assume his duty soon.

He also expressed his desire to reach out to some specific units of the university for collaboration in critical areas of development.

Responding, Professor Olayinka expressed his profound appreciation for the kind gesture of the governor-elect and prompt response to the challenges on the campus at a time when it was least expected.

Olayinka, who informed the governor-elect of the different areas of intervention of the University to the development of the educational sector in the state was optimistic that the existing relationship enjoyed by the University with its immediate environment will be sustained by the new government of the state.