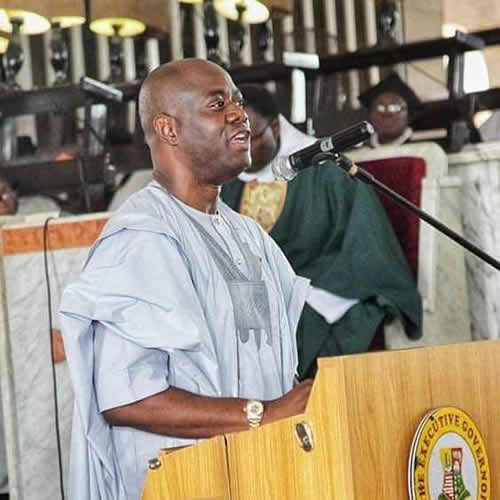 08 Sep 2019 We will Complete All Abandoned Projects, Ensure Oyo Gets Value for Its Money- Makinde

…says ‘we need prayers now more than before’

Oyo State Governor, Engineer Seyi Makinde, on Sunday, declared that his Government will complete all abandoned projects in the State to ensure that State get value for its money.

According to the Governor, the people of the State might not have seen his Government embark on new projects, adding that has been the situation because he was determined to complete all abandoned projects.

A statement by the Chief Press Secretary to the Governor, Mr. Taiwo Adisa, quoted the Governor as making the commitments during a Thanksgiving Service in respect of his 100 days in office at the St. PETER’S Cathedral, Aremo, Ibadan.

He promised that the administration in Oyo would ensure that the people of the State derive value for their money on every project, noting that the Government would give adequate attention to ensuring that the State’s money expended on abandoned projects do not go to waste.

The Governor also asked the people to continuously pray for those in Government, as according to him, the prayers he needed now were more than those of the past, for which he appreciated the people.

According to the statement, Governor Makinde explained that his Government has given utmost attention to the welfare and wellbeing of the people through prompt payment of salaries and pensions in the last 100 days to ensure a quick improvement of the economy of the State for the good of the people, adding that he has also given priority to the education and health sectors.

He maintained that having discovered that the wage bill of the State, salaries of teachers, Local Government workers and pensions were up to about N8 billion, he decided to enforce the prompt payment of salaries on 25th of every month so that if such huge volume of money goes into the economy of the State, life would become better for the people.

Governor Makinde also used the occasion to reiterate his commitment to improving the School Governing Board (SGB) policy of the immediate past Government, noting that his Government would not scrap the policy but give the SGBs subventions and ensure that they are accountable to the State and are more effective.

He explained that his Government scrapped the N3,000 education levy, which he noted was being collected and appropriated by the SGB with no proper account to the State Government, in order to ensure that education becomes free and qualitative.

Governor Makinde, who noted that some people used the situation to blackmail Government by saying that PTA teachers and security men guarding schools were being paid from the levy and that after its cancellation, schools were not safe, dispelled the fears that SGBs would be scrapped.

Speaking earlier, the Provost of the church, The Very Revd. A.A. Adebiyi, who preached on the topic: “Thanksgiving: The road to success,” described Governor Makinde as a wise man for showing full commitment to the welfare of the people through prompt payment of workers’ salaries and pensions, free education and giving attention to hospitals, among others.

He noted that any leader who is after the welfare of his people and the stability of his domain is wise.

Adebiyi, who said that he was sure that Governor Makinde did not come to the church to give thanks for mere achievements in 100 days but to acknowledge that the last 100 days had been by God’s help and commit the things yet to be done into God’s hands, charged the Governor to always give thanks to God.

He lamented that most leaders in Nigeria and mostly people of the Black race often demonstrate lack of wisdom by allowing ego and self-centredness to dominate them, saying that leaders who do not think about the welfare of others, those who want things for only themselves and are only interested in enriching themselves are fools.